Brett Favre Turns Down Rams Effort To Recruit Him 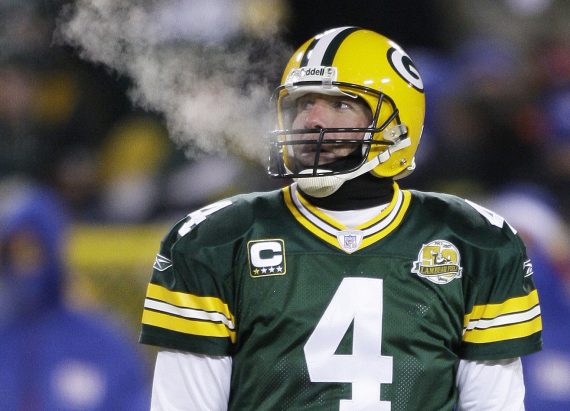 It’s been three years since Brett Favre last played for an NFL franchise after having retired and unretired more than a few times in previous years. That didn’t stop the St. Louis Rams from reaching out to him this week after Sam Bradford suffered a season-ending injury:

The St. Louis Rams did turn to an out-of-work quarterback after losing Sam Bradford to a season-ending knee injury Sunday.

But the guy they reached out to wasn’t Tim Tebow. It was Brett Favre.

“It’s flattering,” he told Jon Saraceno and Andy Pollin in a SportsTalk 570 interview today, “but there’s no way I’m going to do that.”

And he sounds like he really means it, although he said he thought a couple of teams had inquired about his services.

“I do watch games, [but] I don’t watch them a lot. … I can honestly sit here and say I don’t go ‘I want to do that’ or ‘I feel like I could do that better.’ I leave that up to other people. I had a great career. I think if anything, the last year I played was an obvious, writing-on-the-wall vision for you, if you will. It was time.”

Favre just doesn’t seem to need it any more.

“When I decided to go, I mean it was time to go. I think the good thing about where I am in my life right now, I’m not staring off into the clouds or wandering around wondering what to do. When I left the NFL — believe me, the NFL was everything I thought it would be and then some. It was tough, it was fun, it was rewarding. But I felt like I didn’t need to stick around. I didn’t need to be a part of it to feel like I had a purpose in life. I’m coaching high school football right now. This is my second year. I’m having a blast. ”

Favre, notoriously wishy washy about riding off into the sunset, seems determined to remain the offensive coordinator and quarterbacks coach at Oak Grove (Miss.) High School.  Still, he has been making the rounds of late. Last Sunday, he did extensive commentary on the NFL Network’s pregame show and was asked the obligatory question about whether he might return.

So I guess he actually meant it when he said he was retiring that last time.