In Sign of Conservative Split, a Commentator Is Dismissed (NYT)

In the latest sign of the deepening split among conservatives over how far to go in challenging President Bush, Bruce Bartlett, a Republican commentator who has been increasingly critical of the White House, was dismissed on Monday as a senior fellow at the National Center for Policy Analysis, a conservative research group based in Dallas.

In a statement, the organization said the decision was made after Mr. Bartlett supplied its president, John C. Goodman, with the manuscript of his forthcoming book, “The Impostor: How George W. Bush Bankrupted America and Betrayed the Reagan Legacy.”

Mr. Bartlett, who was a domestic policy aide at the White House in the Reagan administration and a deputy assistant Treasury secretary under the first President Bush, confirmed that he had been dismissed after 10 years with the center but declined to make any further comment.

The statement from the organization said Mr. Bartlett had negotiated a deal last year to reduce his workload to give him time to write a book about economic policy and taxation for which he had received a six-figure advance. The statement said that the manuscript he showed Mr. Goodman was “an evaluation of the motivations and competencies of politicians rather than an analysis of public policy.” The statement said the organization did not want to be associated with that kind of work.

Mr. Bartlett was an early proponent of supply-side economics, and in the late 1970’s was active in promoting the tax-cutting philosophy that later became the basis for President Ronald Reagan’s economic agenda. In recent years he has written a syndicated newspaper column as well as articles for academic journals.

Like many economic conservatives, he has grown increasingly disenchanted with the current administration’s fiscal policy, arguing that Mr. Bush has tolerated if not encouraged a federal spending spree, dashing conservative hopes for progress toward a smaller, leaner government.

In his next column, to be published on Wednesday, Mr. Bartlett wrote that it is dawning on many conservatives “that George W. Bush is not one of them and never has been,” citing the administration’s positions on education, campaign finance, immigration, government spending and regulation. The choice “of a patently unqualified crony for a critical position on the Supreme Court was the final straw,” he wrote.

In “Impostor,” which is scheduled to be published in April by Doubleday and has already attracted attention on conservative Web sites, Mr. Bartlett expands on many of the themes he has struck in his columns and other writings. He is critical of the administration for policy decisions like backing away at times from its commitment to open trade and for failing to sell conservative ideas like introducing investment accounts to Social Security.

The National Center for Policy Analysis has every right to fire someone who has written, on company time, a book which differs from their viewpoint and which would otherwise likely generate quite a bit of negative publicity for them in certain circles. Also, while I haven’t seen the book, it is quite conceivable that the Center’s explanation is substantively true and that rather than an academic public policy analysis, the book is polemnical.

As decribed by the Times, at least, Bartlett’s thesis has some merit. While I disagree with him and my OTB cohort Leopold Stotch that Bush isn’t a “real conservative,” there’s little doubt that he has been in many ways disappointing to conservative Republicans.

The American conservative movement has always been a collection of people with different emphases, most notably religious/social conservatives and fiscal conservatives/economic libertarians. Bush is in the former camp, is a True Believer, and serves that part of the Republican base quite admirably. Bartlett, Stotch, and I are in the latter camp and are often quite disappointed.

While Bush is more conservative in both senses than his dad, he has always presented himself primarily as a social conservative, although one who has been in private business and wants to minimize governmental regulation and cut taxes. If we didn’t know in 2000 that he wasn’t a spending hawk, though, we certainly knew by 2004. Given that the alternatives were Al Gore and John Kerry, though, it wasn’t as if fiscal conservatives had better alternatives.

Update: Dan Drezner and Matt Yglesias have interesting takes on this controversy as well. Matt doesn’t think this much matters because Bush is still quite popular among ordinary conservatives. He cites the following from a piece in TIME:

Bush’s friends contend that it is the conservative Ãƒ©lite, not the President, who miscalculated and that self-righteous right-wingers stand to lose their seats at the table of power for the next three years. “They’re crazy to take him on this frontally,” said a former West Wing official. “Not many people have done that with George Bush and lived to tell about it.”

Not only is the rank-and-file still loyal to Bush, but dare I say that the pundits who matter are. Fox News and the talk radio hosts with big audiences are still in his corner.

Dan thinks the conservative elite are more important than Matt contends, however:

One could argue that the people Bush is losing right now have been the idea entrepreneurs. Matt is correct that Bush still has quite the firm grip over important policy and power levers. With a reduced bench for supplying supporting ideas, however, will that advantage hollow out?

It seems to me, though, that the crux of the matter remains what I noted in the closing sentence of the original post: What is the alternative? As Kevin Drum has constantly pointed out, it doesn’t matter if the public is tired of the Republicans if it finds the Democrats even more repugnant. Likewise, the conservative base doesn’t need to be kept particularly happy if they’re fired up to keep Hillary Clinton and Howard Dean out of power. 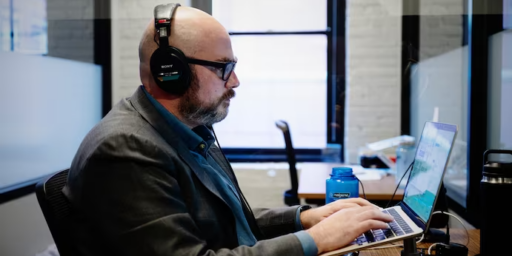 Matt Yglesias’ Return to His Roots