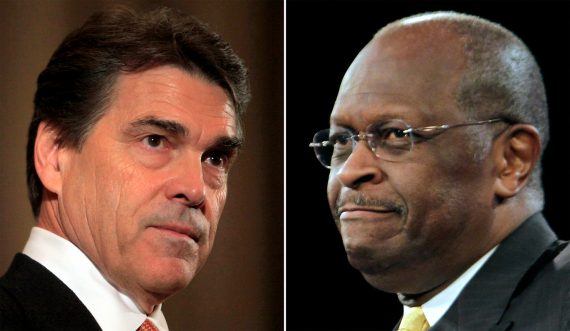 A new poll out of the Lone Star State shows Herman Cain edging out Rick Perry in his own home state:

Gov. Rick Perry is statistically tied with businessman Herman Cain among Republican presidential primary voters in his home state of Texas, with the rest of the GOP candidates well behind the leaders, according to the new University of Texas/Texas Tribune poll.

Cain got 27 percent to Perry’s 26 percent among Texas registered voters who identify themselves as Republicans. U.S. Rep. Ron Paul was next with 12 percent, followed by former Massachusetts Gov. Mitt Romney at 9 percent and former U.S. House Speaker Newt Gingrich at 8 percent. The other Republican primary candidates — Michele Bachmann, Jon Huntsman, Gary Johnson and Rick Santorum — each got 2 percent or less; 11 percent of the respondents answered “don’t know,” and another 1 percent said they would prefer “another Republican candidate.”

“Texans appear to be subject to the national dynamic,” said Jim Henson, who teaches government at UT, runs the Texas Politics Project there and co-directs the UT/Tribune poll. “And the dynamic when we were out in the field was that Herman Cain was ascendant. He had really grabbed the attention of the conservatives in the GOP primary race in particular. And we saw that reflected in this poll.”

Though they’re statistically tied — Cain’s lead over Perry is well within the survey’s margin of error — the former executive leads Perry among rural voters in Texas, and has a smaller lead among suburban Republicans. Perry has a 2-point edge over Cain in urban Texas. Break that down a little more and the poll found Cain with a big lead over Perry in Houston and in Austin, while Perry had smaller advantages over Cain and the other Republicans in Dallas-Fort Worth and San Antonio.

Obviously, this poll was taken before the story that broke last night. Nonetheless, it’s got to have Perry worried.