Canada On Track For Marijuana Legalization By Mid-2018

Justin Trudeau's Liberal Party is set to follow through on a campaign promise. 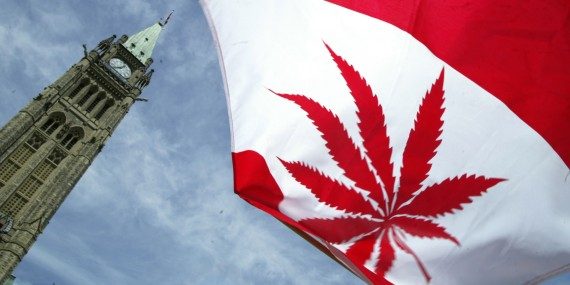 When Canadian Prime Minister Justin Trudeau’s Liberal Party took power in 2015’s national elections, one of the planks that they ran on included the legalization of marjuana nationwide but they made it clear that they probably wouldn’t act on the matter until after dealing with budgetary and other more pressing issues. Now, according to a report from the Canadian Broadcasting Company, it appears that they’re ready to move forward with legislation that will make recreational marjuana legal in America’s neighbor to the north by mid-2018:

The Liberal government will announce legislation next month that will legalize marijuana in Canada by July 1, 2018.

CBC News has learned that the legislation will be announced during the week of April 10 and will broadly follow the recommendation of a federally appointed task force that was chaired by former liberal Justice Minister Anne McLellan.

Bill Blair, the former Toronto police chief who has been stickhandling the marijuana file for the government, briefed the Liberal caucus on the roll-out plan and the legislation during caucus meetings this weekend, according to a senior government official who spoke to CBC News on condition of anonymity.

The federal government will be in charge of making sure the country’s marijuana supply is safe and secure and Ottawa will license producers.

While Ottawa will set a minimum age of 18 to buy marijuana, the provinces will have the option of setting a higher age limit if they wish.

As for Canadians who want to grow their own marijuana, they will be limited to four plants per household.

As the CBC notes, the move comes after what many perceived as an increased crackdown by the national government on marijuana cultivation and possession in the year and a half since the Liberal Party took power, with many advocates for legalization wondering if the Liberal Party would in fact follow through on its campaign promise. As it turns out, though, the timing of the legislation roughly corresponds to the promise that the Liberals made when they took power. At that time, the promise was that they would introduce legislation by the spring of 2017 to legalize marijuana, and that’s exactly what they’re doing. As for the enforcement issue I can’t speak to the issues raised by specific cases but, as with the United States, if the laws are on the books it is the responsibility of the government to enforce those laws. The problem, of course, arises when that law is enforced in a draconian manner and otherwise non-violent people are caught up in a net that lands them in jail or prison, and with a criminal record, for something that shouldn’t be illegal in the first place. Additionally, while I’m not fully up to speed on sentencing for marijuana-related crimes in Canada, it’s often the case here in the United States that people are punished far too egregiously that, all in all isn’t any more dangerous than alcohol. In any case, now that the government is expected to more forward on legalization, albeit in a form that is far too heavily regulated for my taste, the enforcement controversy should cease to be an issue in short order.

The implications of this move in Ottawa should not be underestimated. Once it takes place, it will mean that the entire  5,525 mile border between the United States and Canada will be a gateway to an area where marijuana use is perfectly legal in addition to the eight states and the District of Columbia where it is presently legal here in the United States. Additionally, with the exception of Idaho, which shares a short bit of its border with the Canadian province of Britsh Columbia, every American state that shares a border with Canada has either legalized marijuana or at least legalized it for medicinal purposes. It also means that marjuana use will be legal on the Pacific coast from the border of the United States and Mexico all the way North to Alaska. It also comes at the same time that polling indicates that sixty percent of Americans support legalization as indicated by the most recent Gallup poll on the subject. All of this points toward further momentum for legalization in the United States, even though it is still unclear how the Trump Administration is going to treat the issue of enforcement of Federal laws on marijuana in states where it has been legalized. As it stands, there are moves afoot to have initiatives legalizing marijuana on the ballot in several states for the 2018 elections, including North Dakota and Missouri. Other states could follow suit, or push the matter through their legislatures. Much like same-sex marriage, the reality of nationwide marijuana legalization seems self-evident at this point, the only question is when it will happen rather than if it will happen.