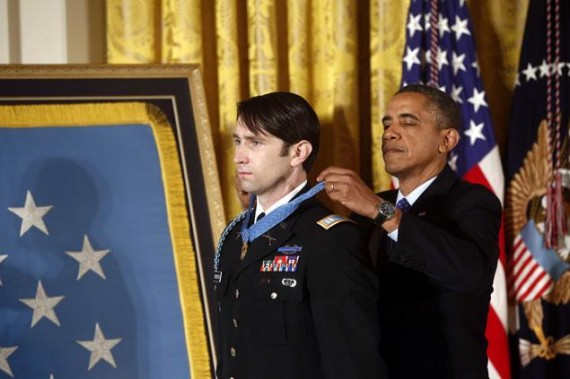 Yesterday, William D. Swenson became the 6th living American to be awarded the Congressional Medal Of Honor for actions in Iraq or Afghanistan. Now, he wants to return to work:

The former Army captain who received the Medal of Honor on Tuesday has asked to return to active duty in the Army, a rare move by an officer who has lived to wear the military’s highest award.

Two U.S. officials tell The Associated Press that William D. Swenson has submitted a formal request to the Army and officials are working with him to allow his return.

Swenson was awarded the Medal of Honor by President Obama in the White House Tuesday afternoon for risking his life to recover bodies and save fellow troops during a lengthy battle against the Taliban in Afghanistan near the Pakistan border in 2009.

The U.S. officials spoke on condition of anonymity because they were not authorized to discuss the request until a decision was made.

Swenson, 34, left the military in February 2011 as a captain, but he could rise to the rank of major once he rejoins. In order to successfully re-enlist, Swenson will have to pass a physical, a drug test and other routine reviews. But officials Tuesday were optimistic it would all fall into place.

Assuming he passes all the prerequisites, I hardly think his request would be denied. Interestingly, though, the article goes on to note that although there have been several cases where Enlisted Men awarded the Medal Of Honor have returned to duty, Army officials were unsure if there had ever been a case of an officer who received the medal doing the same thing. So, Swenson may be the first.

By the way, here’s an excerpt from Captain Swenson’s Medal of Honor Citation:

On that morning, more than 60 well-armed, well-positioned enemy fighters ambushed Captain Swenson’s combat team as it moved on foot into the village of Ganjgal for a meeting with village elders. As the enemy unleashed a barrage of rocket-propelled grenade, mortar and machine gun fire, Captain Swenson immediately returned fire and coordinated and directed the response of his Afghan Border Police, while simultaneously calling in suppressive artillery fire and aviation support. After the enemy effectively flanked Coalition Forces, Captain Swenson repeatedly called for smoke to cover the withdrawal of the forward elements. Surrounded on three sides by enemy forces inflicting effective and accurate fire, Captain Swenson coordinated air assets, indirect fire support and medical evacuation helicopter support to allow for the evacuation of the wounded. Captain Swenson ignored enemy radio transmissions demanding surrender and maneuvered uncovered to render medical aid to a wounded fellow soldier. Captain Swenson stopped administering aid long enough to throw a grenade at approaching enemy forces, before assisting with moving the soldier for air evacuation. With complete disregard for his own safety, Captain Swenson unhesitatingly led a team in an unarmored vehicle into the kill zone, exposing himself to enemy fire on at least two occasions, to recover the wounded and search for four missing comrades. After using aviation support to mark locations of fallen and wounded comrades, it became clear that ground recovery of the fallen was required due to heavy enemy fire on helicopter landing zones. Captain Swenson’s team returned to the kill zone another time in a Humvee. Captain Swenson voluntarily exited the vehicle, exposing himself to enemy fire, to locate and recover three fallen Marines and one fallen Navy corpsman. His exceptional leadership and stout resistance against the enemy during six hours of continuous fighting rallied his teammates and effectively disrupted the enemy’s assault. Captain William D. Swenson’s extraordinary heroism and selflessness above and beyond the call of duty are in keeping with the highest traditions of military service and reflect great credit upon himself, Task Force Phoenix, 1st Battalion, 32nd Infantry Regiment, 3rd Brigade Combat Team, 10th Mountain Division and the United States Army.