The V for Vanity Edition OTB Caption ContestTM is now over.

The V for Vanity Edition OTB Caption ContestTM is now over. 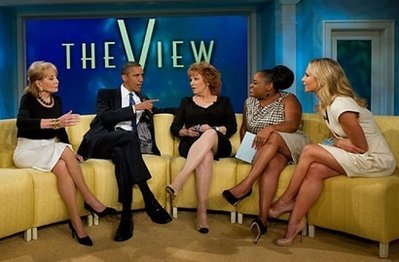 First: charles austin – “If I want an opinion from you I’ll give it to you.”

Second: Bob Jones – The only one of you I want on my staff is Elizabeth.

Third: Timmer – Joy Behar…the only man on the couch.

Maggie Mama – One more tough question, Elizabeth, and you can leave the couch!

G.A.Phillips – Bush did it.

There were five on the bed, and the Chosen One said , ‘bend over… bend over…’

Obama: “I not exactly ready to Jump for Joy?”
Elizabeth: ‘Thank God for that.”

Great Karnac: “What has nine boobs and no brain?”

The Thursday Contest is trolling just for the halibut.