The Ringmaster Edition OTB Caption ContestTM is now over. 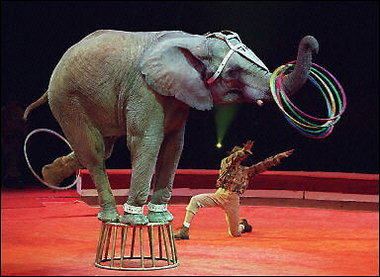 First: McGehee – “Okay, Karl, you’ve made your point — now go back to making the donkey dance.”

Second: Laurence Simon – Sometimes, an elephant wishes it could forget.

Third: Freakyboy – Once Tommy Tune consciously decided no longer to ignore the elephant in the room, he made it Ã¢€œdance fabulouslyÃ¢€.

DaveD – The Republicans had no intention of jumping through any hoops to appease the Democrats. But they showed some willingness to compromise.

DL – Whew! One ring down and only six more to crawl through.

“OK, Now send in the Llamas”

“…and for my next trick I will make Sam Alito a Supreme Court Justice.”

Monday contest has already been banned in communist China.

Other Contests running this week
Riding Sun is celebrating the year of the dog Kangaroo.