When it comes to marijuana policy, Chris Christie is stuck in the past. 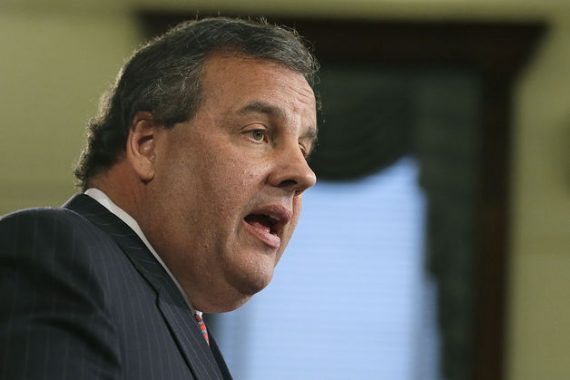 Chris Christie says that if he were President he would “crack down” on marijuana even in states where it has been legalized for either medicinal or recreational purposes:

New Jersey Gov. Chris Christie (R), a potential 2016 contender, said Tuesday that if elected president he would crack down on states that have legalized marijuana.

“Absolutely. I will crack down and not permit it,” he said on “The Hugh Hewitt Show” when asked whether he would enforce federal drug laws that prohibit marijuana even in states that allow sales.

“Marijuana is a gateway drug. We have an enormous addiction problem in this country, and we need to send very clear leadership from the White House on down to federal law enforcement,” he continued.

“Marijuana is an illegal drug under federal law, and the states should not be permitted to sell it and profit from it.”

Christie is in New Hampshire as he mulls a White House run.

Christie’s hard-line approach was the norm until recent years, when public opinion has been steadily moving toward acceptance of marijuana. In January of last year, CBS found that a majority of Americans supported legalizing the drug for the first time in their poll’s history.

A recent poll from the Pew Research Center also found that 54 percent of Republicans do not think the federal government should enforce federal law in states that legalize the drug, as Christie is proposing.

Some may dismiss this as Christie talking tough as he explores the idea of running for President, something which is far less of an easy thing for him than it was two years ago, and that he is cozying up to the GOP base in an effort to placate their doubts about him as a “moderate” Republican. Given some of his recent comments on other issues, such as entitlement reform, there certainly seems to be some basis for the argument that Christie is at least changing the tone of his campaign in an effort to reach out to the Republican base. On this issue, though, Christie has been entirely consistent from the time that he became Governor of New Jersey. Medical marijuana became legal in New Jersey in January 2010, quite literally the day before Christie took office, when then Governor Jon Corzine signed the bill that had passed both houses of the legislature with strong majorities into law. It was left to the Christie Administration to enforce the law, however, and it took several years before anyone in New Jersey who might be medically eligible to buy marijuana legally. As it is, the New Jersey program is tightly controlled by the state in all respects, including the area where it is grown, which is entirely under state control. This is all due to Christie, who was quite open about his desire to control the program as tightly as possible and delay its implementation. When it comes to drug legalization, Christie has made clear that he would veto and bill that passed the legislature that did so, although he has said he would respect the outcome of a citizen initiative on the issue. Given that record, what Christie is saying now isn’t really very different from what he’s been saying about this issue for years, and it is, of course, pretty much the same traditional “law and order” position that we’ve seen from Republicans over the years.

As far as the facts go, of course, Christie’s arguments against marijuana are basically nonsense. As Carimah Townes notes, the “gateway drug” argument in particular was debunked by a National Academy of Sciences study that was released sixteen years ago. That study found that there was “no conclusive evidence that the drug effects of marijuana are causally linked to the subsequent abuse of other illicit drugs.” This finding has been corroborated by other studies that have been released in subsequent years. Other studies has shown that the horror stories have have been told over the years regarding marijuana’s impact on  long-term brain function and other conditions are largely without merit and that, on the whole, regular marijuana use may be no more dangerous than regular alcohol consumption. Finally, the history of our War On Drugs seems to make clear that treating marijuana in the manner that we do has done far more harm on a societal level than the drug (and I’m not sure it’s correct to call marijuana a “drug” but that’s another issue) itself would ever do even if it were completely legal and widely available. Like many drug warriors, Christie is repeating the same tired nonsense that we have heard for decades, and the only thing that his policies would do is unfairly victimize otherwise innocent people for no good reason at all.

While this is obviously an attempt on Christie’s part to cast himself as the “law and order” candidate, I’m not sure that it really makes political sense, even in a Republican primary. Polling now shows that a majority of Americans support marijuana legalization, and even larger majorities support legalization for medicinal purposes. Even among self-identified Republicans and conservatives, support for outright legalization has increased significantly and support for medical marijuana is quite high. Moreover, Christie’s position goes against a generally pro-Federalism position among conservatives that argues that the Federal Government should let the individual states decide how to handle this issue and, if they choose to legalize marijuana, to refrain from prosecutions outside of those that involve interstate transportation of marijuana, violence, or ties to international drug cartels. A politician who argues that Washington should be able to barge in and override state law in the manner Christie suggests doesn’t seem to me like one that is going to go over well among Republicans, especially given the fact that many of the people who would be voting in the 2016 primaries are already skeptical of Christie to begin with.