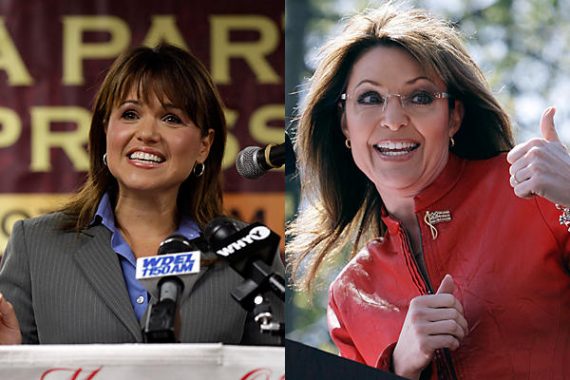 I noted yesterday that Christine O”Donnell was invited and then dis-invited to Saturday’s Iowa Tea Party rally within hours. Well, late in the day she was invited again:

After news spread across the Internet that O’Donnell had been dumped by the same tea party movement that catapulted her to victory last September over Rep. Mike Castle in the GOP Delaware Senate primary, tea party leaders had a change of heart and re-invited O’Donnell.

“We’re making room for her,” [Tea Party of America president Ken] Crow told The News Journal late Tuesday. “We welcome her and look forward to hearing her speech.”

This morning, though, it was announced that Sarah Palin’s appearance that the rally, which some had initially speculated would be the kickoff for a Presidential bid, is now “on hold:”

The person said Ms. Palin’s appearance was “no longer confirmed” and cited “continual lying” from event organizers at Tea Party of America, including a recent mixup over whether former U.S. Senate candidate Christine O’Donnell of Delaware would also speak.

Ms. Palin is known for last-minute schedule changes that whipsaw supporters and media across the country. But the latest decision is puzzling. Ms. Palin’s speech at the rally was viewed as her most high-profile appearance of the summer, fueling  speculation she was indeed plotting to run for the Republican presidential nomination.

Attendees were reportedly traveling from across the U.S. to attend the rally in Iowa, which holds the nation’s first nominating contest next year.

The former governor will now appear at a Friday event in Des Moines sponsored by the group Conservatives4Palin. It is currently scheduled for 8 p.m. at The Machine Shed Restaurant, though the location will probably have to be changed, the person close to Ms. Palin said. Ms. Palin is still scheduled to appear at a Tea Party Express tour stop Monday in New Hampshire.

Adding to the confusion, ABC News is quoting the head of the Tea Party group organizing the event as saying that Palin is still appearing.

So, who knows what’s happening. This much is clear, though; Palin isn’t announcing a darn thing this weekend. If she was, the planning and PR wouldn’t be nearly this amateurish.

Update: It now looks like O’Donnell is out again, as part of the price for getting Palin to agree to attend.