Life comes at you fast.

A recurring theme of critics of conservatism is that its adherents lack empathy, becoming open to new ideas only when personally impacted. Whether that’s true generally is debatable but this week gave us yet another anecdote.

Former game show host Chuck Woolery, who tweeted Sunday that “Everyone is lying” about COVID-19, including the media, Democrats and the Centers for Disease Control and Prevention, said a day later that his son was diagnosed with the disease.

“The most outrageous lies are the ones about Covid 19. Everyone is lying. The CDC, Media, Democrats, our Doctors, not all but most, that we are told to trust,” Woolery wrote Sunday night without citing evidence.

On Monday afternoon, Woolery said his son tested positive for COVID-19, the disease caused by the coronavirus.

“To further clarify and add perspective, Covid-19 is real and it is here. My son tested positive for the virus,” Woolery tweeted, adding that he feels for “those suffering and especially for those who have lost loved ones.”

Granting that he’s getting up there—he’s 79 and born more than two years before my parents, both of whom have passed—it’s just incomprehensible to me that he seriously thought a virus that has infected nearly four million Americans and killed some 142,080 was a “hoax.” Even President Trump quit pretending so months ago (although it didn’t keep him from retweeting Woolery’s nonsense).

He has two living sons, from his third marriage, but Woolery did not reveal which one was diagnosed with the disease. Obviously, one wishes him a speedy recovery. 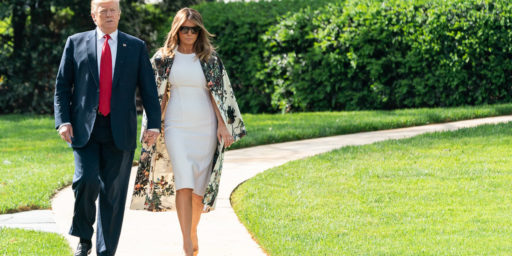