Stephen Colbert has been running an ongoing shtick in which he's trying to start a political action committee, gets letters from his Viacom bosses poo-pooing the idea, and then inviting his lawyer on to explain ways to get around these concerns. 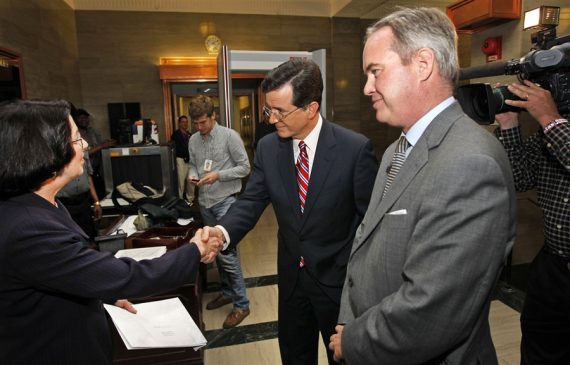 Stephen Colbert has been running an ongoing shtick in which he’s trying to start a political action committee, gets letters from his Viacom bosses poo-pooing the idea, and then inviting his lawyer on to explain ways to get around these concerns. Timothy Lee argues that the parody falls flat:

I think the idea is that we’re supposed to think it’s ridiculous that Stephen Colbert would use his position as a media personality to raise money for a PAC that would then attempt to influence elections. But there’s some serious cognitive dissonance going on here. Colbert’s parody beautifully, if inadvertently, illustrates what’s wrong with the liberal critique of the Citizens United decision.

In progressive mythology, Citizens United is a case about whether large corporations like BP, Verizon, and Pfizer can use their vast resources to buy ads that drown out the voices of other participants in the political debate and sway elections toward candidates they favor. This is a real problem, and I think Senators McCain and Feingold sincerely believed the legislation that bears their names would help solve it.

But “corporations” include many entities beyond the Fortune 500. The ACLU, Sierra Club, and Human Rights Watch are all corporations. “Free speech for corporations” might sound insidious if the corporation in question is Exxon Mobil. But it’s harder to get worked up about the corrupting influence of “corporate speech” when we’re talking about the ACLU running television ads criticizing a candidate for supporting the Patriot Act.

Under the First Amendment, citizens are entitled to buy ads criticizing a political candidate, especially in the last 30 days of an election. And a group of citizens who lack the resources to buy ads individually are entitled to use the corporate form to pool their resources and buy those ads collectively. That’s what Citizens United (the non-profit conservative organization) was doing when it bought ads promoting an anti-Hillary Clinton movie during the 2008 primaries. And in Citizens United (the Supreme Court decision) the high court affirmed their right to do so.

Which gets to the weirdness of Colbert’s parody. Stephen Colbert is trying (or at least pretending) to create a vehicle for his fans to pool their money so that Colbert can create ads “promoting” (mocking) conservative candidates. The ads are guaranteed to be funny, and they could also influence 2012 political races. I think that’s a brilliant idea, and I’m glad that the Supreme Court has affirmed Colbert’s (and his fans’) right to engage in this type of political speech. Colbert, in contrast, seems to be mocking his own free of speech rights. By asking us to root against Colbert-the-character’s quest for a PAC, Colbert-the-comedian seems to be implying that it’s ridiculous that the law would allow him to create such a PAC. But it isn’t ridiculous. Colbert should be free to create the PAC, people should be free to give to it, and Colbert should be free to tell people about the PAC on his show.

I’ve actually found the bits fairly entertaining, mostly because of the byplay between Colbert and his real-life lawyer, former FEC chairman Trevor Potter. As I’ve noted before, I think Colbert is hampered somewhat by having to stay in character as a faux right wing talk host; it often muddles the punch line. While I’m in agreement with Lee’s take on Citizens United–I’m leery of the influence of money in politics but think allowing ordinary folks to pool money along interest group lines is the best practicable way to even the playing field–I’m not sure that Citizens United is the aim of the gag.

What’s been amusing to me about the series is the absurdity of federal regulations. Colbert gets four half-hour segments a week–excepting the 40 or so weeks of vacation he and Jon Stewart have managed to negotiate–to spout his political views on television. He’s an opinion maker and doubtless influences elections at the margins because of his platform. He’s used his Viacom-provided show to organize a huge rally on the Mall. That’s  all unassailable under FEC regulations.Yet, somehow, the same people who give him that platform would be “making a contribution” if they allow him to solicit contributions for a PAC or run a faux election for the presidency? And then there are limitations in the law that apply to PACs that don’t apply to Super-PACs–which are nothing more than PACs with “super” appended to them? That’s absurd, regardless of your views on the merits of campaign finance.

FILED UNDER: Law and the Courts, Popular Culture, US Politics