Yet another case of breathless media reporting on academic research findings. 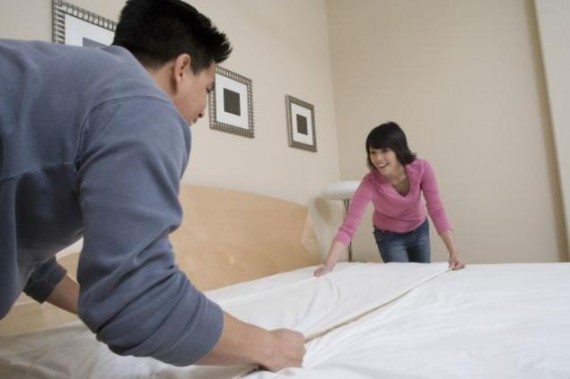 Couples in which husbands do their share of the housework are more likely to divorce, a study by some guy in Norway finds.

The Telegraph (“Couples who share the housework are more likely to divorce, study finds“):

In what appears to be a slap in the face for gender equality, the report found the divorce rate among couples who shared housework equally was around 50 per cent higher than among those where the woman did most of the work.

“What we’ve seen is that sharing equal responsibility for work in the home doesn’t necessarily contribute to contentment,” said Thomas Hansen, co-author of the study entitled “Equality in the Home”.

The lack of correlation between equality at home and quality of life was surprising, the researcher said.

“One would think that break-ups would occur more often in families with less equality at home, but our statistics show the opposite,” he said.

The figures clearly show that “the more a man does in the home, the higher the divorce rate,” he went on.

The New York Daily News, The Independent, and others covered the story as well but none answered a fundamental question: Who is this Thomas Hansen guy? What are his credentials? What was his study methodology? The only Thomas Hansen that I’ve been able to dig up on Google that makes any sense is a theoretical evolutionary biologist at the Centre for Ecological and Evolutionary Synthesis in Oslo, but even his research doesn’t quite fit.

Regardless, even in the media interviews about the research, Hansen anticipates my instinctive response: That sharing housework is a proxy for other things, not an explanatory variable.

The reasons, Mr Hansen said, lay only partially with the chores themselves.

“Maybe it’s sometimes seen as a good thing to have very clear roles with lots of clarity … where one person is not stepping on the other’s toes,” he suggested.

“There could be less quarrels, since you can easily get into squabbles if both have the same roles and one has the feeling that the other is not pulling his or her own weight.”

But the deeper reasons for the higher divorce rate, he suggested, came from the values of “modern” couples rather than the chores they shared.

“Modern couples are just that, both in the way they divide up the chores and in their perception of marriage” as being less sacred, Mr Hansen said. “In these modern couples, women also have a high level of education and a well-paid job, which makes them less dependent on their spouse financially.

They can manage much easier if they divorce,” he said. Norway has a long tradition of gender equality and childrearing is shared equally between mothers and fathers in 70 per cent of cases.

But when it comes to housework, women in Norway still account for most of it in seven out of 10 couples. The study emphasised women who did most of the chores did so of their own volition and were found to be as “happy” those in “modern” couples.

My hunch here is that age and education levels—not housework sharing—are the key explanatory variables.  Couples in the age cohort where men tend to do something approximating half of the housework—roughly people my own age and younger where both the man and woman have college degrees and careers outside the home—are simply more likely to divorce than older, more traditional couples. Indeed, the nature of the institution of marriage is simply different for such couples.

Atlantic Wire’s Jen Doll had a similar reaction to the piece and points to other research:

Despite the glee of some about what they think this study means, it doesn’t really make 1:1 sense, particularly given a spate of other research looking at how modern marriages function and that the couples who stay together and are happier together generally do share housework. And, oh, the studies that say that men who contribute to household chores are happier, too. And that, even, there’s a correlation between shared housework and more sex in a marriage. So, what’s up here? Well, there’s a lot going on, not least of which is an oversimplification and conflation of factors. Is there really any correlation between shared housework and divorce? Let’s look first at the study, called “Equality in the Home,” co-authored by Thomas Hansen (affiliation not noted in the reports, nor have I been able locate this particular study online; I’ve reached out to what appears to be his email to try to find out more), who says, “What we’ve seen is that sharing equal responsibility for work in the home doesn’t necessarily contribute to contentment.”

Even that seems dubious, though, as it’s hard to imagine that either men or women want the role of all-the-time-laundry-room-attendant. And from what we know from other recent research about marriage, educated women are more likely to marry later, and less likely to divorce. These are generally women more likely to expect equality in their marriages. On the divorce side, women are also likely to be the ones to initiate divorces when they do happen. Why? “Verbal, emotional and physical neglect.” Shared housework hardly fits any of those categories.

Most enlightening is that Hansen really seems to blame divorce stats on modern couples themselves, who may not consider marriage the be-all and end-all, who might be happier living independently, and who have marriages in which women, educated and with their own careers, are no longer dependent on men. (Women, also, don’t need to be married to be “socially acceptable.”) Note: Each of these things has nothing to do with housework. Because these people sometimes “can manage much easier if they divorce,” says Hansen, they sometimes do. But this, again, is hardly about sweeping the floor: It means that if “they” (women or men) feel they’ll be happier outside of a bad marriage, they will likely seek to end it. The way we perceive marriage has changed; couples are more easily able to get out of them, without stigma, and if they are to have them, want more from them—happiness, love, sharing of chores, equality, both partners achieving as much as they can. This means, as sociologist Eric Klinenberg, author of Going Solo, told me recently, contemporary marriages tend to veer between very good and very successful, or very much the opposite. Educated people who marry later are more likely to stay together, but if things do not go well, they will likely divorce, because the bars against them doing that are lower than ever.