This year’s Conservative Political Action Conference kicks off at 9 this morning.  Some are predicting a very different atmosphere than seen in recent years.

Consider the situation that confronted many of these same attendees at last year’s CPAC: President Obama had just been inaugurated and enjoyed remarkably high public approval ratings. Seemingly impregnable Democratic majorities in the Senate and House were set to approve Obama’s $787 billion economic stimulus program, and were beginning hearings on radical legislation to federalize the commanding heights of the economy, beginning with health care and energy. Washington was moving to take over General Motors and Chrysler, Congress seemed certain to pass a bill to abolish secret ballots in workplace representation elections, and the Department of Homeland Security was only weeks away from making public an official “study” warning of “right-wing extremists.”

Today, Obama’s public approval ratings are the lowest for any president at this point in his first term, while Congress has sunk so low in public esteem as measured by the New York Times/CBS News annual survey that only 8 percent of respondents said their representative deserved to be re-elected. Two-thirds of Americans say the country is headed in the wrong direction under Obama. Perhaps most remarkably, 56 percent of the respondents told the Times/CBS poll that they prefer a “smaller government with fewer services,” and nearly 60 percent said “government is doing too many things better left to businesses and individuals.”

But the most important development of the past year for conservatives was the amazing explosion of the Tea Party movement. Millions of Americans who previously had never given a second thought to politics and public policy issues took to the streets to protest excessive government spending, regulation and taxation. Americans are listening to conservatives today as they haven’t since the Gipper was in the White House. Obama has indeed delivered change we can believe in.

A jolt of anti-Obama populist energy has upended the movement’s traditional hierarchy, lifting some new or previously low profile groups to unprecedented heights while leaving traditional powers struggling to adapt.

Ascendant are groups that focus on fiscal issues like reducing government spending and taxation, which last year drove tens of thousands of new conservative activists to the streets and town halls in protest of big spending initiatives backed by President Obama and congressional Democrats. Groups that concentrate on social issues like abortion and same sex marriage have been relegated to a lower profile, as to some extent have those focusing on national security.

Grassroots organizations have seen their membership rolls, coffers and standing boosted by the new activists, many — but not all — of whom identify with the cacophonous tea party movement.

These activists generally have been leery of the Republican Party, as well as established big-name conservative groups and leaders who made their reputations in Washington game, particularly those seen as tainted by a pay-to-play Beltway culture or linked to a George W. Bush-era GOP establishment viewed as having abandoned its principles.

We saw some of that last year, with the prominent positioning of Sam Wurzelbacher — better known as “Joe the Plumber.”  But there’s no denying that the angry populism of the Tea Party movement has gained tremendous momentum.   Could they do what Christian Conservatives started doing thirty years ago — go from a die-hard fringe of the movement to its leader?

A quick look at the agenda of this year’s CPAC provides little evidence that it’s happening.   It’s pretty much the same gaggle of lobbyists, Congressmen, presidential wannabees, columnists, and apparatchiks as usual.   But, yes, there’s an 11:45 session called “Saving Freedom One Patriot at a Time” paneled by various Tea Party types of whom I’ve never heard.   Indeed, there are several panels whose titles begin with “Saving Freedom,” although most are filled with the usual suspects from Townhall, Heritage, Americans for Tax Reform, and the like.

But maybe the very fact that CPAC is emphasizing this populist agenda a little more than it has in the past is a sign of Tea Party ascendancy?  Hard to say.   If it is, I’m rather leery, since I’m not a populist.   Then again, it may be better than the ritual regurgitation of Ronald Reagan’s 1980 campaign platform that we get most years.  At some point, the Movement is going to have to get into the 21st Century. 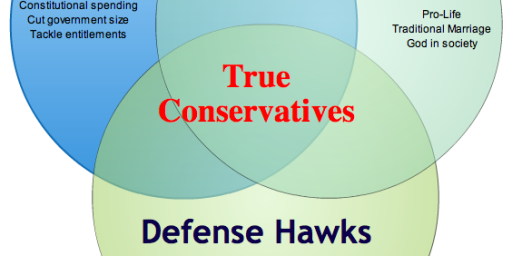