Cato’s William Niskanen argues in today’s Washington Examiner, as I have numerous times in this space, that the solution to the lack of congressional representation for D.C. residents is not an unconstitutional single vote in the House but rather retrocession to Maryland.

Mayor Adrian Fenty might not like it, but retrocession would be superior for most District residents on political, fiscal and economic grounds. Politically, District voters would get full representation in the House of Representatives, plus the opportunity to vote for the two senators from Maryland, the several senior state officials and the local legislators.

The most likely new residents of Washington, Md., would be those who are now most deterred by the District’s high taxes and poor government services: wealthier individuals and families, those with school-age children, those who expect to leave estates and businesses — especially unincorporated businesses, restaurants and hotels.

Retrocession would also lead to a division of government roles between the District and the state of Maryland. A division of roles similar to that now in Maryland would leave the new city of Washington, Md., with control of K-12 education, police, fire, corrections and streets; and most expenditures for parks and recreation, housing and waste disposal.

The Washington government would no longer bear the rapidly increasing costs of Medicaid, the responsibility for administering the University of the District of Columbia, and the special problems of providing long-term incarceration. Maryland would assume the responsibility for providing higher education, public welfare, health and hospitals, highways and prisons.

Aside from the not-insignificant problem that neither the citizens of Maryland nor the residents of the District support this idea, it makes plenty of sense. And, again, it has the additional advantage of being constitutionally permissible.

My only caveat is that I would not retrocede the entirety of the District but only residential D.C. I would still keep the government district, including the White House, Capitol Hill, the Supreme Court, and the National Mall as a separate District under the current constitutional scheme. The Framers showed wisdom in having the seat of government separate from the influence of any single state. They did not, however, anticipate half a million people moving there and being disenfranchised. 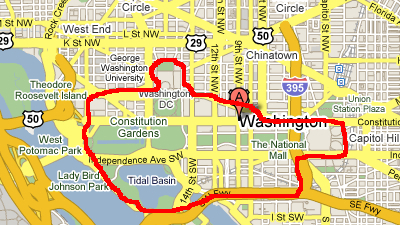