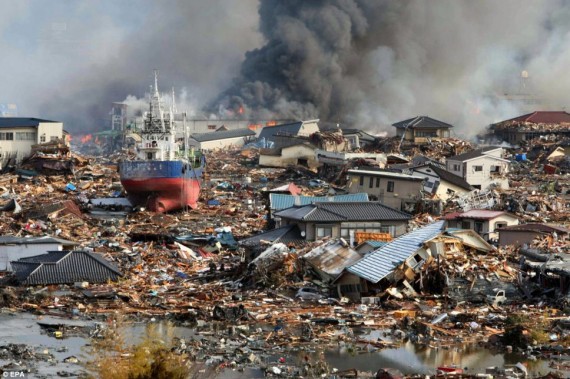 The latest casualty estimates out of Japan are quite disheartening:

The terrible toll of Japan’s double disaster became clearer today as it emerged as many as 25,000 people could be dead.

As rescue crews trawled through mile after mile of tsunami-stricken wasteland, officials from the coastal town of Ishinomaki confirmed that 10,000 of their citizens were missing.

The unimaginable figure is the same given as in the town of Minamisanriku, also in Miyagi state, which lost around half its population when it was razed to the ground by the 20 foot high wall of water.

So far the official death tool has hit 4,340 with another 9,083 people missing. But there were very real fears tonight that the statistics were a terrible underestimate of those who perished in the tsunami.

Across the country some 434,000 people have been made homeless and are living in shelters.

Ken Joseph, an associate professor at Chiba University, is in Ishinomaki with the Japan Emergency Team.

And that doesn’t take into account, of course, any longer term casualties resulting from radiation exposure.