A debate schedule that seems designed to limit the ability of viewers to see candidates, and other incidents, has led Hillary Clinton's opponents to allege that the D.N.C. is favoring Hillary Clinton. 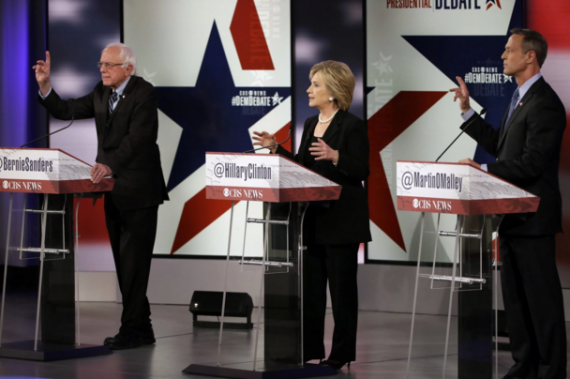 In case you weren’t aware, there will be Democratic Presidential debate in New Hampshire that will air live on the ABC network. It will be the third of the six debates that the Democratic National Committee scheduled earlier this year, and the second that will air on a weekend. Much like the second debate, which took place in Iowa and yet oddly took place at the same time as a major game for the Iowa State Hawkeyes, this debate will conflict with major events such as a National Football League Game between the Jets and the Cowboys, the premier weekend of the new Star Wars movie and, of course, the final weekend of shopping before Christmas. Perhaps not surprisingly, this is causing the campaigns of the two candidates already fighting on uphill battle against Hillary Clinton to complain about perceived DNC favoritism toward the Clinton campaign:

If a presidential debate is held and nobody watches, does it really happen?

While viewers are expected to watch the third Democratic debate on Saturday night, they are unlikely to be doing so in the droves that tuned into the Republican debates or the Democratic face-off that was held on a weeknight. While some of that interest on the Republican side can be attributed to the Donald J. Trump effect, critics of the Democratic National Committee’s scheduling process are also upset that the party is muting its message by holding debates when people are less likely to tune in.

There was much discussion over the number of Democratic debates that would be held in this cycle, with Martin O’Malley and Senator Bernie Sanders pushing for more opportunities to face off publicly with Hillary Clinton. They ultimately settled on six, of which two were scheduled for Saturday evenings and one for a Sunday.

As in the previous Democratic debate, which was held at the same time as an important college football game, the candidates will clash on Saturday night with the New York Jets and the Dallas Cowboys.

Mr. O’Malley, who has been the most vocal about the timing of the debates, complained about the issue in August.

“They’ve scheduled it during shopping season, December 19th,” Mr. O’Malley said. “I don’t know why that is. I think it’s out of a false sense that they have to circle the wagons around the inevitable front-runner

A spokeswoman for Mr. O’Malley’s campaign said that avoiding prime-time debate slots was a way for the Democratic Party to “protect” Mrs. Clinton, and that it had given Mr. Trump and the Republicans a better platform to express their views.

Mr. Sanders’s campaign said that he did not have any input about when the debates would take place and that he was hoping for more opportunities to discuss the issues with his rivals for the nomination.

“We’re playing the hand we were dealt,” said Michael Briggs, a spokesman for Mr. Sanders. “I guess Christmas Eve was booked.”

The Clinton campaign did not respond to a request for comment.

For its part, the Democratic National Committee says that it opted for fewer debates to give candidates more time to interact with voters on the campaign trail. The weekend debates were scheduled because the party felt it was important to have some of them broadcast on networks that do not require cable subscriptions, the committee said. Major broadcasters were less flexible about bumping their previously scheduled prime-time lineups for debates.

Alvin Chang at Vox, meanwhile, notes that there has never been a debate held this close to Christmas before:

‘Tis six days before Christmas and at 8 o’clock at night, Democrats have a debate — and viewership may be light.

But seriously, folks, debates have never been scheduled like this before.

To give you a sense of how rare it is for primary debates to be scheduled so close to the 25th, I looked at every debate going back to 1948. And only once have we had a debate so close to Christmas, and that wasn’t even a real debate; it was a special episode ofMeet The Press on December 19, 1999, during which Al Gore and Bill Bradley duked it out on the Sunday morning show.

This is important because primetime viewership tends to dip around the holidays — plus, this debate is on a Saturday, which is very rare because viewership is low on Saturdays and Sundays.

Usually the national parties want people to see their candidates onstage, which is why we’ve never had a debate this close to Christmas, much less on a Saturday. It is free media. But there’s some speculation that the Democratic National Committee scheduled debates on times people don’t watch specifically to protect frontrunner Hillary Clinton. This hasn’t been substantiated, and a few strategists have told me they believe it was incompetence on the DNC’s part, rather than some ploy to keep Clinton off the debate stage. But whatever the reason, by the end of primary season, we’re going to have seen a lot less of the Democratic candidates in debates than Republicans.

As I’ve said before, if one wished to conclude that there a conscious effort on the part of the Democratic National Committee, many of whose members have already endorsed Hillary Clinton, to minimize the opportunity for voters to be exposed to Clinton’s opponents, one need look no further than the debate schedule itself. Even after tomorrow, the next Democratic debate, and the last one before voting starts with the Iowa Caucuses, will be on January 17th, a Sunday that also happens to be the day of the N.F.L.’s Divisional Playoff round. (Schedule of Democratic Debates) By contrast, none of the Republican debates have been on a weekend, and there are no weekend debates scheduled in the Republican race until February. (Schedule Of Republican Debates). Perhaps the theory that this can be ascribed to DNC incompetence rather than a deliberate plan, but it seems to be adding to the perception in some corners that the powers that be in the Democratic Party would just as soon see Martin O”Malley and Bernie Sanders go away at this point.

This criticism about DNC favoritism just happens to be happening at the same time as another, separate controversy has erupting dealing with apparent data breaches of a shared database that the DNC maintains for the use of all the Presidential campaigns. Overnight, it was revealed that, at some point during the past week, the firewall that is supposed to prevent one campaign from being able to access the data of other campaigns had failed and that the Sanders campaign used that as an opportunity to access and download data being stored on the DNC servers by the Clinton campaign, which led the DNC to cut Sanders off from the database and the Sanders campaign to fire the staff worker apparently responsible for those people who worked with the Sanders side of the database. This afternoon, though, the Sanders campaign alleged that the firewall had not been properly maintained by the DNC’s vendor for months and that its own data had been accessed by another, unnamed, campaign on at least one previous occasion and that the DNC essentially swept the matter under the rug. Additionally, in a statement that clearly seemed to accuse the DNC of favoritism, the Sanders campaign said it would take the DNC to court if its access to its own data was not immediately restored.

Combined with the comments about the debate schedule, this incident seems likely to fuel the perception that has been growing online among Sanders supporters that their candidate is not being treated fairly, and that’s something that could have an impact on party unity further down the road unless wounds are healed.