Last night's celebration in Wilmington is sure to be tempered just a bit by news that Christine O'Donnell is sixteen points behind her Democratic opponent. 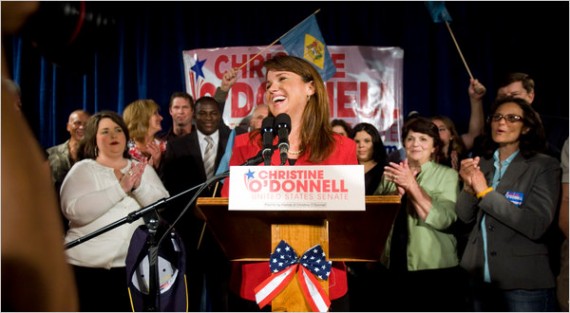 As promised, Public Policy Polling is out with the General Election portion of the poll it conducted in Delaware over the weekend, and the news is very good for the Democrats:

Republicans more than likely cost themselves a Senate seat last night. Chris Coons begins the general election in Delaware with a 50-34 lead over Christine O’Donnell. Mike Castle would have led Coons by a 45-35 margin.

While O’Donnell may have ingratiated herself to Delaware’s small group of registered Republicans over the last month she’s turned off everyone else. An August Daily Kos/PPP poll in Delaware found her favorability rating at 23/33. It’s now 29/50.

If Castle had won he would have received more Democratic support than any other Republican Senate candidate in the country. Now our polling suggests with O’Donnell’s victory that Coons will win more Republicans than any other Democratic Senate candidate in the country. That’s because of a general unwillingness to support O’Donnell from Castle’s moderate base- folks from the centrist wing of the GOP are planning to support Coons 54-31. Overall he takes a full 25% of the GOP vote while also largely consolidating the Democratic base for a 72-13 lead on that front. He also has a narrow 42-36 advantage with independents, a group Democrats are losing with most everywhere else.

Only 31% of voters in the state think O’Donnell’s fit to hold public office while 49% think that she is not. Even with Republicans in the state less than half at 48% believe that she is. That may seem inconsistent with her victory last night but keep in mind that our general election poll includes GOP voters who were not planning to vote in yesterday’s primary. Only 33% of independents and 16% of Democrats believe O’Donnell’s fit.

The poll internals are pretty grim for O’Donnell supporters who are still flush with victory:

The big caveat here is that this poll was conducted prior to the primary so it may not be the best representation of the state of the General Election field. Nonetheless, it’s clear that O’Donnell has a massive problem here. As Steven Taylor said this morning, the Republicans have thrown away a winnable Senate seat. If that’s what they want, fine, but it doesn’t strike me as a good long term strategy.