Democrats appear to have regained momentum in the Generic Congressional Ballot.

A new poll from CNN shows Democrats gaining steam in the battle for control of Congress, but it remains far too early to tell what this means for how the election in November might turn out:

Democrats once again hold a wide advantage in a generic congressional matchup, according to a new CNN poll conducted by SSRS, backed by a base of supporters who are more enthusiastic than Republican partisans and more motivated by core issues.

The poll finds 54% of registered voters say they back a Democrat in their congressional district, 38% say they back a Republican. That’s a shift in favor of the Democrats since January, bringing their advantage in a hypothetical generic matchup to about the same level as early 2006, a year in which the party won control of both the House and the Senate.

This also mirrors their advantage on the question last fall, before a January full of good economic news brought a shift toward more positive numbers for both President Donald Trump and his party. The same poll also found Trump’s approval rating declining — a metric that’s frequently closely tied to his party’s performance in a midterm election year.

Before getting into some of the more interesting details that the poll purports to reveal, it’s worth noting that these numbers are somewhat out of sync with where the polling averages stand with respect to the Generic Congressional Ballot, the bellwether measurement that is cited most often during midterm elections such as this. The RealClearPolitics average, for example, shows an average of 46.3% of respondents saying they would vote for a Democratic candidate in November while 36.7% say they’d be inclined to vote for a Republican. In the Pollster average, the numbers have 42.5% of respondents saying they’d vote for a Democrat and 36.8% saying they’d vote for a Republican. The FiveThirtyEight average, meanwhile, puts the number of respondents saying they would vote for Democrats at 48.2% and 38.2% for Republicans. Overall, as the RealClearPolitics Chart shows the trend. continues to be in Democrats favor, and recent indications show declining numbers for the GOP: 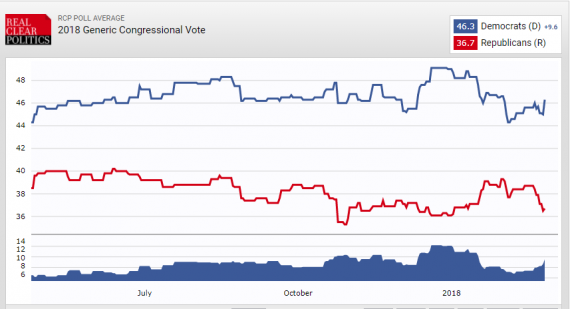 Getting back to the issue of gun policy, the poll report note that this issue has seen a significant uptick in the number of people saying that the issue is important to them. As the article notes, in the month before the midterms in 2014, which took place just under two years after the massacre at Sandy Hook Elementary, just 26% of voters cited the issue as one that was likely to influence their vote in the election. Currently, that number stands at 49%. These increases can be seen regardless of party identification with 62% of Democrats saying the issue was important to them, while 40% are saying that now. Among independents, the number of people calling gun policy important has increased 5 points from 2014 and now stands at 42% of respondents. Perhaps most significantly, the numbers are showing that the issue now seems to be a high priority issue have increased measurably among supporters of gun control, for whom 80% say it is “extremely important” while just 19% are saying otherwise. If these numbers hold up, which is a big “if,” then it could mean that the momentum we’ve seen on the gun issue in the nearly two weeks after the shooting in Parkland, Florida may be stronger than what we’ve seen after similar incidents in the past, and it could be very good news for Democrats in the fall.

Looking briefly at another poll question that often serves as a barometer for the mood of the public, the RealClearPolitics average for the bellwether Right Track/Wrong Track poll shows that just 36.9% of respondents think the country is on the right track, while 56.0% believe we are on the wrong track. Ordinarily, these are the types of numbers that inure to the benefit of challengers and the detriment of incumbents and the incumbent party, which in this case would be the GOP. It’s also worth noting, though, that Congress overall has a fairly low approval rating regardless of party, and that public cynicism and disdain for government in general is fairly high, it’s entirely unclear that these kinds of numbers on the Right Track/Wrong Track poll will be of much help for Democrats in 2018 or beyond.

As I’ve said it’s still far too early to make any real predictions or projections regarding the outcome of the battle for control of Congress. The number and electoral impact of events that could happen between now and November that would have an impact on the election is unknowable, for example, and the Democrats still face several obstacles with respect to winning control of either the House or the Senate. In the House, that includes the fact that the number of seats they need to win to get control is still fairly high, while the number of seats that are either competitive or winnable remains small. Under those circumstances, the Democrats would have to win almost every competitive seat available to gain control of the House without losing any seats of their own, and the odds of that happening are pretty low. On the Senate side, Democrats continue to be presented with the dilemma that there are really only two, or possibly three, Republican seats that could be fliipped, including Nevada, Arizona, and possibly Tennessee, while there are many more Democratic seats in red states or states that Donald Trump won in 2016 that Republicans could potentially flip, or at least where Democrats would be required to spend significant money defending. Among these seats are Montana, North Dakota, Indiana, and Missouri. The prospect that the Senate ends up back at the same 51-49 margin it is today, then, seems to be fairly high at the moment. All of this could change in a few months, of course, but as things stand now, it is still far too early to make any reliable predictions about how the battle for control of Congress will turn out in November. 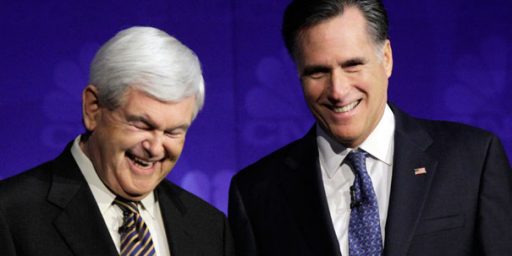