Did The Egyptian Military Set Morsi Up To Fail?

Certain aspects of Egyptian civic life have improved rapidly in the wake of the military coup, raising at least some questions about the events leading up to it. 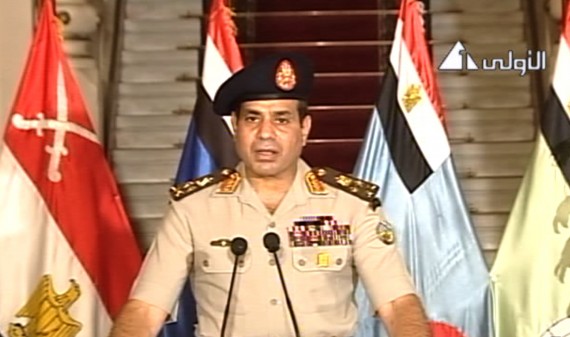 Kevin Drum points to a report in The New York Times that notes rather sudden changes in Egypt in the wake of the downfall of the Morsi regime that arguably put last week’s coup, and the events that led up to it, in a very different light:

CAIRO — The streets seethe with protests and government ministers are on the run or in jail, but since the military ousted President Mohamed Morsi, life has somehow gotten better for many people across Egypt: Gas lines have disappeared, power cuts have stopped and the police have returned to the street.

The apparently miraculous end to the crippling energy shortages, and the re-emergence of the police, seems to show that the legions of personnel left in place after former President Hosni Mubarak was ousted in 2011 played a significant role — intentionally or not — in undermining the overall quality of life under the Islamist administration of Mr. Morsi.

And as the interim government struggles to unite a divided nation, the Muslim Brotherhood and Mr. Morsi’s supporters say the sudden turnaround proves that their opponents conspired to make Mr. Morsi fail. Not only did police officers seem to disappear, but the state agencies responsible for providing electricity and ensuring gas supplies failed so fundamentally that gas lines and rolling blackouts fed widespread anger and frustration.

“This was preparing for the coup,” said Naser el-Farash, who served as the spokesman for the Ministry of Supply and Internal Trade under Mr. Morsi. “Different circles in the state, from the storage facilities to the cars that transport petrol products to the gas stations, all participated in creating the crisis.”

Working behind the scenes, members of the old establishment, some of them close to Mr. Mubarak and the country’s top generals, also helped finance, advise and organize those determined to topple the Islamist leadership, including Naguib Sawiris, a billionaire and an outspoken foe of the Brotherhood; Tahani El-Gebali, a former judge on the Supreme Constitutional Court who is close to the ruling generals; and Shawki al-Sayed, a legal adviser to Ahmed Shafik, Mr. Mubarak’s last prime minister, who lost the presidential race to Mr. Morsi.

But it is the police returning to the streets that offers the most blatant sign that the institutions once loyal to Mr. Mubarak held back while Mr. Morsi was in power. Throughout his one-year tenure, Mr. Morsi struggled to appease the police, even alienating his own supporters rather than trying to overhaul the Interior Ministry. But as crime increased and traffic clogged roads — undermining not only the quality of life, but the economy — the police refused to deploy fully.

White-clad officers have returned to Cairo’s streets, and security forces — widely despised before and after the revolution — intervened with tear gas and shotguns against Islamists during widespread street clashes last week, leading anti-Morsi rioters to laud them as heroes. Posters have gone up around town showing a police officer surrounded by smiling children over the words “Your security is our mission, your safety our goal.”

“You had officers and individuals who were working under a specific policy that was against Islamic extremists and Islamists in general,” said Ihab Youssef, a retired police officer who runs a professional association for the security forces. “Then all of a sudden the regime flips and there is an Islamic regime ruling. They could never psychologically accept that.”

Now, granted, much of this could obviously be sour grapes on the part of the Muslim Brotherhood and a desire to ascribe the forces that led to the popular uprising that led to his ouster as something that sprang to life thanks at least in part to an active campaign by loyalists to Mubarak and, more importantly, the military, inside the government who engaged in  activities designed to undermine Morsi’s rule. After all, it feeds into the Brotherhood’s own ideology and helps to create a narrative of victim hood that is likely to serve them well in the coming years if they choose to become active opponents of the new government rather than trying to find a way to become a part of Egyptian civil society. Additionally, it prevents them from having to recognize the rather obvious faults of the Morsi regime, ranging from his failure to revive the Egyptian economy, to his turn away from any kind of democratic pluralism and toward a full-on advocate for the Muslim Brotherhood’s platform, to his assumption of near dictatorial powers last November over the objections of nearly every segment of Egyptian society. It’s much easier for them to claim a vast conspiracy against them than to admit their own obvious failings.

While the sudden turnaround on the streets of Egypt may seem suspicious, there are other perfectly logical explanations for what may be happening. Businesses tend not to be very productive when the political situation is unstable or when the political leadership is acting in a manner that seems to indicate that they don’t know how to effectively lead the country. Once that regime is wiped away, it’s not necessarily surprising that things would start turning around quickly.  Additionally, for better or worse, the Egyptian military does seem to inspire in the people a sense of stability and order that is also conducive to the normal functioning of the economy and the rapid changes in the country since the coup could easily be attributable to an alleviation of the sense of uncertainty that had been gripping the country.

At the same time, though, there are some suspicious things. The unwillingness of the Interior Ministry, and namely the police, to cooperate with Morsi during his rule and their rapid return to the streets subsequent to his downfall certainly does raise an eyebrow. Whether that was part of some active conspiracy by the military, though, or just an independent decision by a Ministry that was still staffed largely with Mubarak loyalists, is a completely different question. In some sense, though, Drum is correct. If this is true, then it does tend to cast the coup and the events leading up to it in a very different light.