Elizabeth Warren Once Again Says She’s Not Running For President 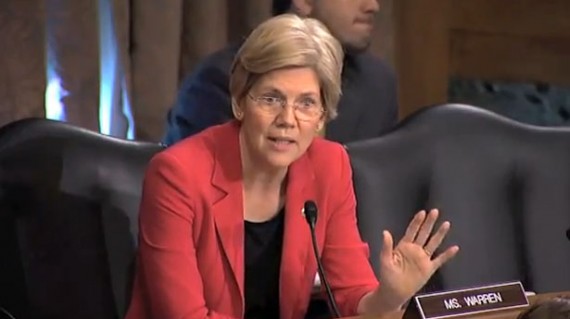 Massachusetts Senator Elizabeth Warren is once again telling supporters that she has no plans to run for President in 2016:

(CNN) - Days before the release of her new book, Sen. Elizabeth Warren reiterated that she’s not angling for a White House bid.

“I’m not running for president,” the Massachusetts Democrat said in an interview that aired Sunday on CBS’s “Sunday Morning.”

Pressed again, she stood firm: “I’m not running for president. You can ask it lots of different ways.”

Warren, who was elected to the Senate in 2012, has become the face of the progressive movement. While former Secretary of State Hillary Clinton is the overwhelming favorite in public opinion polls for the 2016 Democratic nomination, Warren frequently comes in at a distant second or third place.

AFL-CIO President Richard Trumka said last week that the senator, who’s built her brand around challenging Wall Street, is “the prototype of a person we would want to be president.”

“She has a very well defined set of values and unlike many politicians, she actually sticks by those values and fights to implement them. In short, it don’t get no better,” he said in a Reddit “Ask Me Anything”session.

But Warren has said before that she’s “not running for president” and has pledged to serve out her term through 2018.

While there have been plenty of people in the past who ran for President after saying that they would not do so, the current occupant of the White House being the most prominent of those perhaps, one gets the impression that Warren is being sincere here. She shot down similar speculation back in December, and she hasn’t taken any real steps that would be indicative of someone interested in running for President. Most significant, perhaps, is the fact that Warren has seemingly made an effort to keep her head down during her first term. You don’t see her on the talk show circuit very much, for example, and outside of committee hearings she isn’t really making much noise on Capitol Hill. All of that could change, of course, and the fact that she’s going on on a book tour will be interpreted by some as a sign that she’s at least thinking about running. For the time being, though, it looks like Warren really doesn’t want to run for President in 2016.