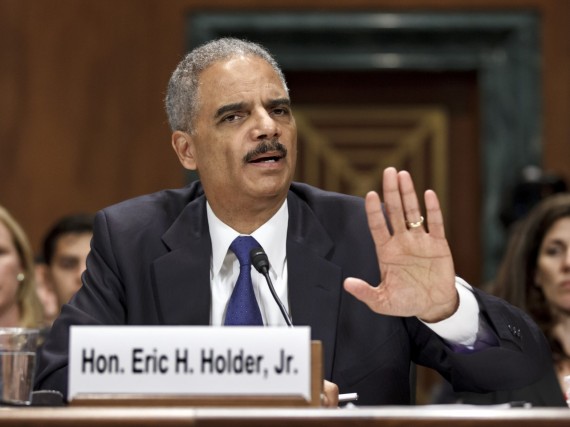 Back in February, Attorney General Eric Holder stated that he would be stepping down before the end of the year. Due mostly to the fact that the changes that Harry Reid orchestrated to the filibuster rule last November meant that a Democratic-controlled Senate would be able to push the nomination of a replacement through by a simple majority, most observers expected that we’d see him step aside in enough time that President Obama would be able to appoint a replacement while his party was still assured of control of the nomination process. Today though, Holder said he has no plans to leave before the November elections:

Attorney General Eric H. Holder Jr. has decided he will stay in his job through the fall mid-term elections, but he will not commit beyond the end of the year, according to Justice Department officials familiar with his plans.

After Health and Human Services Secretary Kathleen Sebelius announced her resignation earlier this month, some Washington insiders speculated that Holder would also resign before the mid-term elections, because it would be more difficult to confirm a new attorney general if the Democrats lost control of the Senate.

A medical scare in February also added to the sense that Holder’s departure might be imminent. During a staff meeting, he felt faint and was taken by ambulance to the hospital where he was treated for an elevated heart rate. Holder told close friends that it was “spooky” and he felt like it was a “sign” to spend more time with his family.

But Justice officials and others close to Holder, 63, said that several initiatives Holder has cared deeply about for a long time are now underway, and he is not in a hurry to leave.

One official close to Holder described the attorney general as being “in the twilight of his tenure” and feeling an urgency to put key initiatives in place.

“He is as energized and excited about the work he’s doing now than I’ve ever seen him in the 16 years I’ve known him,” said Robert Raben, a Washington lobbyist and an assistant attorney general in the Clinton administration who worked with Holder.

Holder has indicated that he does not want to remain attorney general through Obama’s entire second term.

That may be exactly what ends up happening, though. If the GOP does get control of the Senate in November, it will become exceedingly difficult for President Obama to get a nomination for a position as high profile as Attorney General through the Senate unless he ended up picking someone “safe” who would essentially be a caretaker in the position through the end of the President’s term. Given that, the President may prefer Holder to stay on and, given the relationship between the two men, one assumes that Holder would agree to the request no matter how much he might wish to return to private life.