A Federal Judge in Washington, D.C. has blocked the Trump Administration from implementing its ban on transgender soldiers.

A Federal Judge in Washington, D.C. has issued an order blocking the Trump Administration from implementing at least part of its ban on transgender Americans from serving in the military, giving the Administration yet another set back at the hands of the Judicial Branch:

A United States District Court judge on Monday blocked a White House policy barring military service by transgender troops, noting that the policy did not appear to be based on facts, but instead on “a desire to express disapproval of transgender people generally.”

President Trump announced in a series of tweets in July that American forces could not afford the “tremendous medical costs and disruption” of transgender troops, and said “the United States Government will not accept or allow transgender individuals to serve in any capacity in the U.S. Military.” A presidential memorandum released in August required all transgender service members to be discharged by March.

Transgender groups sued the administration in late August on behalf of transgender service members, arguing that the ban was discriminatory and violated their constitutional right to due process equal protection under the law.

On Monday, Judge Colleen Kollar-Kotelly of the Federal District Court for the District of Columbia issued an injunction blocking enforcement of the ban until the case was resolved, saying the effect of the order was to revert to the status quo.

The judge — who was named to the court by President Bill Clinton — noted in her ruling that the changes in transgender policy were “not genuinely based on legitimate concerns regarding military effectiveness or budget constraints, but are instead driven by a desire to express disapproval of transgender people generally.”

The ruling allows transgender troops to join the military and re-enlist, pending the outcome of the case, but leaves in place a White House provision that prohibits federal spending on sex reassignment surgery for troops.

Supporters of transgender troops, noted that the injunction was temporary, but were optimistic.

“The court has clearly recognized the Trump administration is discriminating. We hope this is the beginning of the whole policy being overturned,” said Matt Thorn, executive director of the advocacy group OutServe. “Hopefully the White House learns the Constitution doesn’t allow you to do this kind of thing.”

More from Dominic Holden of Buzzfeed:

A federal judge in Washington, DC, on Monday suspended key parts of President Trump’s policy to ban transgender troops from serving in the military — a policy slated to take effect fully in March 2018 — dealing a sharp rebuke to an administration that claimed transgender service members hamper the military’s strength and that Trump held supreme power to enact the ban.

US District Court Judge Colleen Kollar-Kotelly wrote in a 76-page decision granting a preliminary injunction that Trump’s justifications for the policy “do not seem to be supported by any facts,” noting “it appears that the rights of a class of individuals were summarily and abruptly revoked for reasons contrary to the only then-available studies.”

Kollar-Kotelly notes that transgender people “suffer severe persecution and discrimination,” saying the government must therefore supply an exceedingly persuasive justification for actions that target them — known as intermediate scrutiny. Having failed to meet that bar, she adds, six transgender people suing to overturn the ban are likely to prevail on constitutional grounds.

“The Court is convinced that Plaintiffs are likely to succeed in this lawsuit under the Fifth Amendment,” Kollar-Kotelly said.

The decision is the latest blow to an administration that has seen many of its flagship executive actions challenged and curbed in federal courts, while federal officials, including US Attorney General Jeff Sessions, have skewered lower-tier federal judges for issuing nationwide injunctions on federal policies.

Trump’s lawyers at the Justice Department had claimed earlier this month that a ruling to block the transgender military rules would be premature, given that the policy does not take effect until next March.

“No actual discharge or denial of accession has occurred, and they will not suffer a hardship if the Court withholds consideration,” the government attorneys said in a 44-page brief.

Justice Department spokesperson Lauren Ehrsam told BuzzFeed News on Monday afternoon, “We disagree with the Court’s ruling and are currently evaluating the next steps.”

Ehrsam added the lawsuit was “premature for many reasons.”

But the judge cast aside those claims in her opinion Monday, writing, “This decision has already been made. These directives must be executed by a date certain, and there is no reason to believe that they will not be executed…Further delay would only serve to harm the Plaintiffs.”

Shannon Minter, legal director of the National Center for Lesbian Rights, which is representing the plaintiffs, called the order a “complete victory.”

In issuing an injunction, Kollar-Kotelly also reinstated a timeline to let transgender applicants join the military starting in January 2018. But her order does not block a policy concerning gender reassignment surgeries, and dismissed those claims along with an estoppel claim.

However, Minter said that an interim policy by Defense Sec. James Mattis still requires the military to provide transgender troops with those medical services and that the order “granted all the relief we are seeking.”

Lawyers for the National Center for Lesbian Rights and GLBTQ Legal Advocates & Defenders — two legal groups behind the lawsuit decided on Monday — argued in a lawsuit filed in Julythat Trump harbors animosity toward transgender people and that he has no rational basis for singling out transgender people for the ban, thereby violating Fifth Amendment rights to due process and equal protection.

The lawsuit is brought by active-duty transgender soldiers who fear being discharged, identified as Jane and John Doe, and two transgender students who plan to enlist in the military.

Judge Kollar-Kotelly’s decision says the plaintiffs are likely to prevail, but notes the debate over the merits of the case will continue.

Her opinion applied a so-called intermediate level of scrutiny, on par with gender discrimination cases, saying transgender populations have been targeted for discrimination and harassment.

“Although the Court is aware of no binding precedent on this issue, it has taken note of the findings and conclusions of a number of other courts from across the country that have also found that discrimination on the basis of someone’s transgender identity is a quasi-suspect form of classification that triggers heightened scrutiny,” Kollar-Kotelly writes. “As a form of government action that classifies people based on their gender identity, and disfavors a class of historically persecuted and politically powerless individuals, the President’s directives are subject to a fairly searching form of scrutiny.”

The ruling comes some three months after President Trump announced on Twitter that he would be ending the policy of allowing transgender Americans to serve openly in the military that had been announced by the Obama Administration just a year earlier. In the immediate aftermath of that decision, the Defense Department made clear that the policy would not be changing immediately based solely on the President’s tweets, and that the Pentagon would await a formal order from the White House before announcing how it would proceed. This statement was made notwithstanding the fact that the White House had previously stated that the President’s tweets represent official policy.  Additionally, the Commandant of the U.S. Coast Guard stated that his branch of the service would continue to follow the Obama Era policy until they receive a formal order to the contrary.  In that regard, it was reported by The Blade, a news site that caters to the LGBT community, that a new policy directive regarding transgender troops had been prepared by the White House and would be sent to the Defense Department. Subsequent to the President’s announcement, made clear that most Americans opposed the President’s announced policy, but that did not appear likely to deter the President from his chosen course. I Trump finally signed a formal order implementing the new policy in late August, but the order gave at least some latitude to the Defense Department to decide how to implement it. In response to that order, Secretary of Defense Mattis announced that a panel would be established to discuss how to implement Trump’s order and what impact it should have on those service members who came out of the closet in reliance on the announced change in policy last year. While some insinuated that Mattis was defying Trump’s ban, it was clear that this was not the case. Finally, there were lawsuits filed against the ban both before and after the formal policy announcement from the White House alleging that the ban was unconstitutional and on the basis that several of the Plaintiffs had come forward in reliance on the Obama Administration policy change and that it would violate their rights to punish them for acting in reliance on that change. It is in the first lawsuits that the ruling handed down today came.

As noted above, the Judge’s injunction only blocks part of the new policy and is only a temporary order. For the time being, though, the effect of the ruling is that the status quo that was in existence prior to the formal policy announcement from the White House will remain in effect for the time being. This means that transgender soldiers who have come forward and self-identified as transgender cannot be discharged from the military or otherwise subjected to discipline based on their gender identity. It would also appear to mean that the Department of Defense should continue to formulate the policies necessary to fully implement the Obama Administration’s 2016 directive, including policies that deal with the isssue of how to handle transgender Americans who wish to join the military, how to integrate openly transgender soldiers into the military, and what the policy will be regarding medical treatment for transgender soldiers, including both hormonal therapy and any surgical procedures that such individuals may require. The order will remain in effect as long as the case is pending in District Court unless it is overturned by a higher court such as the Court of Appeals for the D.C. Circuit or the Supreme Court of the United States. Ultimately, of course, there will need to be a final ruling on the merits of the Plaintiffs claims in the case, but given the fact that the Judge’s opinion found that they would be likely to succeed on the merits, the odds are most likely in the Plaintiffs’ favor at this point in time.

Presumably, of course, the Trump Administration will appeal this case to the D.C. Circuit Court of Appeals. Meanwhile, we are still waiting on preliminary decisions from the District Courts in Washington State and Maryland where the other lawsuits were filed. If either or both of those Judges decide to follow the ruling here, then it would mean that the ultimate fate of this stay would be irrelevant pending appeals on those two cases. 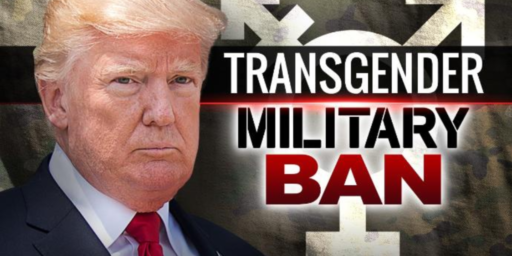