It looks like fewer people are tuning in for the second Democratic debate.

Last month’s first debate of the Democratic debate saw fairly respectable viewership numbers for a political debate in the summer, with roughly 15.3 million viewers watching the first night of the debate and 18.1 million tuning in for the second night. It does not appear, though, that this trend will continue going forward. The first night of the second Democratic Presidential debate saw a significant drop in viewership compared to the first debate:

Another 2.8 million people watched via the CNN Digital live stream, according to CNN.

The first of two debates from Detroit was watched by approximately 7 million fewer people than the June 26 debate broadcast by NBC, MSNBC and Telemundo, which attracted 15.3 million viewers for the broadcast from Miami.

The cable news network faced formidable competition from ABC’s “The Bachelorette,” which aired its finale on Tuesday night. NBC also offered up a new episode of “America’s Got Talent,” which has rated well over the years since its start in 2006.ADVERTISEMENT

CNN will likely see an uptick in viewership on Wednesday night, which was the case with NBC, MSNBC and Telemundo last month for its second of two debates.

Wednesday night’s event from the Fox Theatre in the Motor City will feature 2020 Democratic front-runner Vice President Joe Biden in an anticipated rematch with Sen. Kamala Harris (D-Calif.), who hammered Biden in Miami one month ago, winning praise from critics as the winner of the night

In addition to the fact that it went up against some popular broadcast network programming, another possible explanation for the ratings drop could be the fact that it was not broadcast as widely as the June debate. That debate was simulcast on MSNBC, on NBC’s broadcast network, and on Telemundo, the Spanish language network owned by NBC as well as being available via live-streaming. The second debate is only available on CNN’s live stream. It could also be the case that the lineup for last night’s debate, which included only two top-ranked candidates, was a factor in people choosing not to tune in. Whether that will change with tonight’s debate, which includes both former Vice-President Biden and Senator Kamala Harris, will be interesting to see.

In any case, this drop in ratings could be a problem for lower-tier candidates who had been hoping to use their debate appearance to give their campaigns a much-needed boost. The fewer viewers there are, the less likely that is. 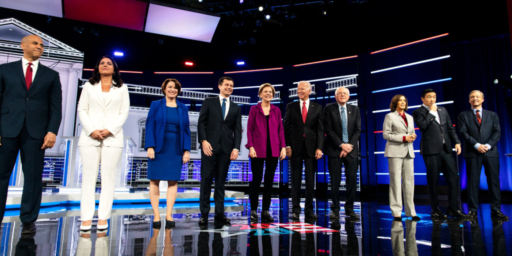