Terry Jones may sue the City of Dearborn for its prior restraint actions against him. And he should. 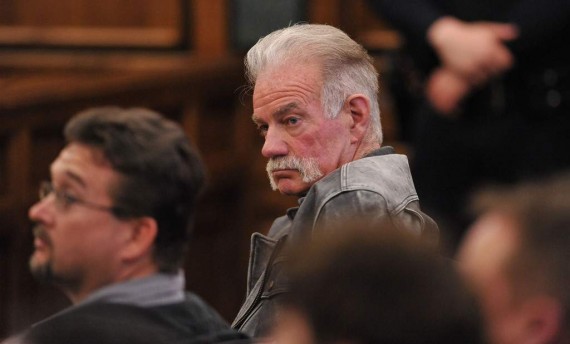 Terry Jones, who was once again vaulted into the public eye thanks to a bizarre and clearly unconstitutional legal proceeding in Dearborn, Michigan on Friday, now says that he intends to return to Dearborn to protest what happened to him:

Saying he was shocked and outraged, the Rev. Terry Jones said he intends to return to Dearborn this week to protest outside City Hall against what he called the denial of his First Amendment rights.

The Quran-burning pastor from Florida was briefly handcuffed and jailed by Dearborn police Friday after a trial stemming from an unusual complaint filed by Wayne County prosecutors.

“It was a total violation of our constitutional rights,” Jones told the Free Press on Saturday in an interview from Detroit Metro Airport, where he waited for a flight back to Florida. “It was a mockery of the judicial process.”

Now, Jones said he is considering filing a lawsuit against Wayne County and Dearborn authorities and he plans to rally at 5 p.m. Friday.

County prosecutors filed a complaint to make Jones stay away from a mosque for a rally last week because they said it would breach the peace. A jury sided with prosecutors Friday, and Jones was led to jail after refusing to pay a $1 bond.

“I was shocked,” Jones said. “I was horrified.”

He said he is concerned about a system where “you arrest people who have committed absolutely no crimes.”

The city, meanwhile, seems to be backtracking on its justification for why it choose to blatantly violate Jones’s rights:

Dearborn Mayor John O’Reilly Jr. told the Free Press on Saturday that he has no problem with Jones rallying at City Hall, where the city has a free-speech zone. City officials have been urging Jones to rally there instead of the mosque.

“If he had done this in the first place, there would have been no issue to begin with,” O’Reilly said. Regarding the possibility of a lawsuit, O’Reilly said the city acted properly in trying to protect public safety and respect the rights of its residents to worship.

Six churches sit near the mosque on Ford Road, and access is difficult because of the layout. Traffic would have been especially bad on Good Friday, when Jones was planning to rally, city officials said. Moreover, there was concern about outbreaks of violence because of Jones’ views and past actions

While First Amendment case law does allow authorities to place reasonable time, place, and manner regulations on protests of this nature, the law is clear that any such regulations must be narrowly tailored:

Time restrictions regulate when individuals may express themselves. At certain times of the day, the government may curtail or prohibit speech to address legitimate societal concerns, such as traffic congestion and crowd control. For example, political protesters may seek to demonstrate in densely populated cities to draw maximum attention to their cause. The First Amendment permits protesters to take such action, but not whenever they choose. The Supreme Court has held on more than one occasion that no one may “insist upon a street meeting in the middle of Times Square at the rush hour as a form of freedom of speech” (Cox v. Louisiana, 379 U.S. 536, 85 S. Ct. 453, 13 L. Ed. 2d 471 [1965]). In most instances a commuter’s interest in getting to and from work outweighs an individual’s right to tie up traffic through political expression.

The reasonableness of any such restriction will be evaluated in light of specific guidelines that have been established by the Supreme Court. First, a restriction must be content-neutral, which means the government may not prohibit entire classes of expression, such as speech concerning poverty, drug abuse, or race relations. Second, a restriction must be viewpoint-neutral, which means that it must apply uniformly to all speech; that is, it may not silence only those speakers whom the government opposes or sanction only those whom the government supports. Third, a restriction must burden speech no more than is necessary to serve an important government interest. Restrictions that are carefully aimed at controlling the harmful consequences of speech, such as litter, unrest, and disorder, will normally satisfy these guidelines.

So, while the City of Dearborn might1 have had grounds for telling Jones and his compatriots that scheduling a protest for the afternoon of Good Friday, when the mosque would be holding Friday prayers and nearby Christian churches would be holding Good Friday services wouldn’t be permitted because of the concerns about traffic and general public order that Mayor O’Reilly cited in the quote above. That doesn’t justify, however, his arrest or a Court Order forbidding him from protesting near the mosque on any day over the next three years. The City, then, could have told Jones that he couldn’t stage his protest on that particular Friday (just as New York City could say that a protest march in Times Square at rush hour is not permissible), what they cannot do is say that he can never protest there.

For all of the reasons that Dodd Harris noted yesterday, it seems pretty clear to me that that Jones has a case against Dearborn authorities for violation of his Constitutional rights in this case.  There is no reasonable justification for a prior restraint on speech based on the fear that this protest might have led to violence, and there’s no way that three-year long injunction against exercising one’s Constitutional rights can be justified as a reasonable time, place, or manner regulations. He may be a jerk, but in this case Terry Jones has been wronged and, for the sake of the First Amendment, he deserves to be defended.

1 I am assuming for purposes of argument that the City’s stated concerns about traffic and the location of other churches holding services on Good Friday are true, although that would be something they would have the burden of establishing.