Marie Yovanovitch, the former U.S. Ambassador to Ukraine, had a lot to say when she testified before Congress yesterday.

Marie Yovanovitch, a career diplomat who served as U.S. Ambassador to Ukraine until earlier this year, appeared behind closed doors before Congressional committees yesterday, and according to the details that have been made public, her testimony was quite revealing:

The former U.S. ambassador to Ukraine whose abrupt ouster in May has become a focus of House impeachment investigators said Friday in remarks before Congress that her departure came as a direct result of pressure President Trump placed on the State Department to remove her.

The account by Marie Yovanovitch depicts a career Foreign Service officer caught in a storm of unsubstantiated allegations pushed by the president’s personal attorney Rudolph W. Giuliani and a cast of former Ukrainian officials who viewed her as a threat to their financial and political interests.

She told lawmakers that she was forced to leave Kiev on “the next plane” this spring and subsequently removed from her post, with the State Department’s No. 2 official telling her that, although she had done nothing wrong, the president had lost confidence in her and the agency had been under significant pressure to remove her since the summer of 2018.

In explaining her departure, she acknowledged months of criticisms from Giuliani, who had accused her of privately badmouthing the president and seeking to protect the interests of former vice president Joe Biden and his son who served on the board of a Ukrainian energy company.

Yovanovitch denied those allegations and said she was “incredulous” that her superiors decided to remove her based on “unfounded and false claims by people with clearly questionable motives.” She also took direct aim at Giuliani’s associates, whom she said could have been financially threatened by her anti-corruption efforts in Ukraine.

Yovanovitch’s testimony could increase calls for the president’s impeachment as she detailed her belief that under Trump’s leadership, U.S. foreign policy has been compromised by self-interested actors who have badly demoralized and depleted America’s diplomatic corps.

“Today, we see the State Department attacked and hollowed out from within,” she said in prepared remarks obtained by The Post, warning that U.S. adversaries such as Russia stand to benefit “when bad actors in countries beyond Ukraine see how easy it is to use fiction and innuendo to manipulate our system.”

Her opening testimony did not, however, reveal new details about Trump’s pressure campaign to persuade Zelensky to investigate his political opponents. Nine hours of questioning didn’t, either, because of her limited visibility of the actions Trump and Giuliani were taking behind the scenes, some Democrats said after leaving the secure room where her deposition occurred. “She wasn’t on that July 25th call,” said Del. Eleanor Holmes Norton (D-D.C.).

At one point in her testimony, Yovanovitch grew visibly upset as she offered a “gripping and emotional account of abuse of power by the president,” Rep. Sean Maloney (D-N.Y.) said after walking out of the meeting. After describing the attacks and conspiracy theories raised against her, she asked for a break to compose herself, Maloney said.

According to two people familiar with her testimony, Yovanovitch’s understanding of efforts to plot her ouster did not come from direct conversations with Giuliani and his close associates. Yovanovitch also did not supply the panel with any documents Friday, two people familiar said — unlike former special U.S. envoy Kurt Volker, who during his testimony last week supplied the panels with copies of text messages detailing his conversations with Giuliani, a top aide to the Ukrainian president, and other diplomatic officials.

Yovanovitch had made some enemies in Ukraine through her efforts to bolster the country’s National Anti-Corruption Bureau, an institution launched in 2014 and aimed at fighting endemic graft and corruption. The bureau particularly angered Ukraine’s recently fired prosecutor, Yuriy Lutsenko, who has accused Yovanovitch of inappropriately interfering in Ukrainian politics, though he subsequently retracted one of his most inflammatory accusations, that she provided him a “do not prosecute list.”

In her testimony, Yovanovitch stressed that she never directed anyone to “refrain from investigating or prosecuting actual corruption,” according to her prepared remarks.

U.S. officials who worked closely with Yovanovitch said her swift ouster stunned career diplomats who had been planning high-
level internal meetings for her that were scrapped because she would no longer be serving in the position. “They fired her in the most dishonorable way imaginable,” said one former State Department official who, like others, spoke on the condition of anonymity to discuss internal processes.

More from The New York Times, which notes an apparent connection between her dismissal, the arrest this week of two associates of Rudy Giuliani, and Giuliani’s dealings in Ukraine on behalf of Donald Trump and others:

WASHINGTON — The State Department’s request went in early March to Marie L. Yovanovitch, a longtime diplomat who had served six presidents: Would she extend her term as ambassador to Ukraine, scheduled to end in August, into 2020?

Less than two months later came another departmental communiqué: Get “on the next plane” to Washington. Her ambassadorship was over.

How and why Ms. Yovanovitch was removed from her job has emerged as a major focus of the impeachment inquiry being conducted by House Democrats. And in nearly nine hours of testimony behind closed doors on Capitol Hill on Friday, Ms. Yovanovitch said she was told after her recall that President Trump had lost trust in her and had been seeking her ouster since summer 2018 — even though, one of her bosses told her, she had “done nothing wrong.”

Her version of events added a new dimension to the tale of the campaign against her. It apparently began with a business proposition being pursued in Ukraine by two Americans who, according to an indictment against them unsealed on Thursday, wanted her gone, and who would later become partners with the president’s personal lawyer Rudolph W. Giuliani in digging up political dirt in Ukraine for Mr. Trump.

From there it became part of the effort by Mr. Giuliani to undercut the special counsel’s investigation into Russian interference in the 2016 election and push for damaging information about former Vice President Joseph R. Biden Jr., a possible Democratic challenger to Mr. Trump in 2020.

In her prepared testimony to House investigators, Ms. Yovanovitch, 60, offered no new details about how Mr. Giuliani’s campaign against her was communicated to the president or how Mr. Trump communicated his demand that she be ordered home. But her opening remarks, provided to The New York Times, amounted to a scathing indictment to Congress of how the Trump administration’s foreign policy intersected with business and political considerations.

Americans abroad in search of personal gain or private influence — especially in a country like Ukraine with a long history of corruption and people eager to exploit them — threatened to undermine the work of loyal diplomats and the foreign policy goals of the United States, she said.
Her removal, she said, was a case in point.

“Although I understand that I served at the pleasure of the president, I was nevertheless incredulous that the U.S. government chose to remove an ambassador based, as best as I can tell, on unfounded and false claims by people with clearly questionable motives,” she said.

Ms. Yovanovitch’s testimony, which could help build momentum for the impeachment inquiry, captured the arc of her troubled tenure in Ukraine: how Mr. Giuliani and his allies mounted a campaign against her based on what she described as scurrilous lies, how the State Department capitulated to the president’s demands to recall her, and the upshot — losing an experienced ambassador in a pivotal country that is under threat from Russia and in the middle of a change in government.

I’ve embedded her opening statement below and if it is any indication of what she testified to during her hours-long appearance on Capitol Hill yesterday then it’s fair to say that she revealed quite a lot, to say the least. To summarize what she said it appears that American foreign policy with Ukraine was effectively highjacked by the White House at the direction and urging of Rudy Giuliani, the President’s private attorney. Giuliani, of course, has come to find himself at the center of the Ukraine scandal due to his efforts to lobby Ukrainian officials on behalf of his client to reopen the investigation into the gas company on whose Board Hunter Biden served as well as the fever swamp conspiracy theory that puts Ukraine, not Russia, at the center of efforts to interfere in the 2016 Presidential campaign. There have also been suggestions that Giuliani was pursuing other interests in Ukraine as well but it’s unclear whether those would be personal interests or interests for other clients.

Whatever the motivation, of course, the fact that American foreign policy was apparently being manipulated by the President and his private attorney is just yet another sign of the corruption that has come to define this Administration. It also appears to be one of the reasons for the many recent reports about declining morale among career State Department personnel. We heard similar reports during the tenure of former Secretary of State Rex Tillerson, of course, but in that case, it was apparently related to mismanagement in the department and Tillerson’s inability to adjust to his role as Secretary of State. This time around, it appears to be related to the extent to which Secretary of State Mike Pompeo is allowing politics to influence the running of the department and to allow outsiders like Giuliani to influence foreign policy and State Department operations.

Where all this leads is at yet unclear, but it’s clear that the issues regarding Ukraine and the Trump Administration go far beyond one phone call.

Here is the text of the former Ambassador’s opening statement yesterday, which has been made public:

Former Ambassador Describes Effort By Trump Associates To Push Her Aside 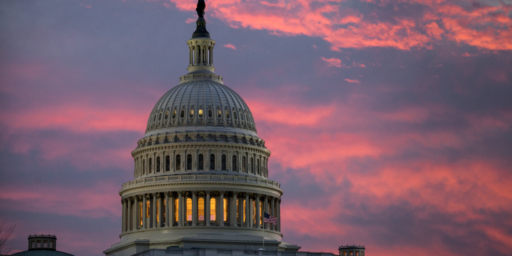 Former Ambassador To Testify On Day Two Of Impeachment Hearings