Marine Le Pen suffered setbacks in the second round of regional voting on Sunday, but the party still seems likely to become more popular in the coming years. 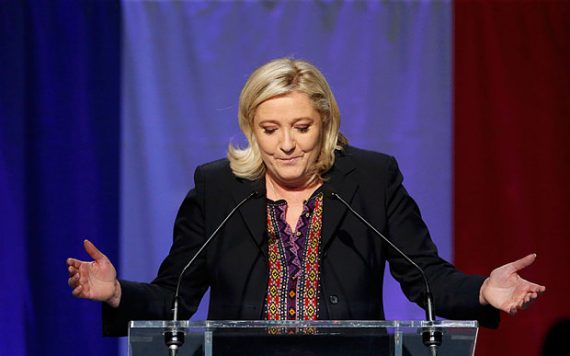 Last week, France’s National Front made news by scoring big victories in the first round of French regional elections, however the party appears to have failed to capitalize on those wins in the second round as both party leader Marine Le Pen and her niece failed to score wins in two closely-watched elections:

PARIS — French voters dealt a sharp setback to the far-right National Front in regional elections on Sunday, depriving the party of victory in any of the country’s 13 regions, according to projections based on exit polls.

A week after the National Front came out on top in the first round of voting, France sent a far different message, with the party losing even in a northern region where its charismatic leader, Marine Le Pen, had been widely expected to win.

The projections also showed the National Front being defeated in another of its strongest areas, the south around Nice, where Ms. Le Pen’s 26-year-old niece, Marion Maréchal Le Pen, was on the ballot.

If confirmed when the vote count is completed, the results would confound expectations that the party, with its anti-immigrant, nativist message, was on the verge of an electoral breakthrough that could have added momentum and credibility to Ms. Le Pen’s hopes of winning the presidency in 2017.

The difference between the two Sundays: In the two main regions where the Front was thought to have had a chance of winning, the Socialist Party candidates dropped out, leaving the field clear for the mainstream conservative candidate.

“I salute the voters who responded to the appeal to block the far right,” said Prime Minister Manuel Valls of the governing Socialist party in a speech Sunday night, even as he warned that “the danger of the far right is not over, far from it.”

Polling had shown Ms. Le Pen’s party getting a strong boost in the aftermath of the terrorist attacks in Paris on Nov. 13 and from the suspicion that two of the attackers may have slipped into Europe with immigrants through Greece.

Early results Sunday had the governing Socialists winning four to five regions, with the mainstream conservative Republicans perhaps taking the rest, including Paris. In contrast to the verdict of commentators after the first round — that the poll-topping National Front had delivered a humiliating setback to the third-finishing Socialists — Sunday’s results could be seen as a boost to the governing party.

Recent polls have shown the Socialists’ leader, President François Hollande, advancing since the attacks last month — a period in which he has made a number of speeches aiming to reassure his shocked compatriots — perhaps putting him in a stronger position for re-election in 2017. His prime minister, Mr. Valls, appeared relieved as he thanked voters on Sunday night.

For weeks the National Front and its supporters had boasted that it was France’s leading party, and that the country had become a three-party system: left, right and — in the Front’s own terminology — nationalist.

But in the end, the results confirmed what an angry Ms. Le Pen herself declared in her concession speech: France is still a two-party country, those who are for the National Front, and those who are against it. “We really are in a bi-party system,” Ms. Le Pen told her supporters Sunday, “no longer right and left, but globalists and patriots, with the globalists working toward the dilution of France in a giant global magma.”

Ms. Le Pen made her presidential ambitions for 2017 clear: “This distinction will be what is fundamentally at stake in the huge political decision of the presidential elections.”

Yet in the northern region where she was on the ballot herself, Ms. Le Pen managed to take only about 42 percent of the vote, according to early projections, to the mainstream right’s 57 percent.

One expert on the Front, the political scientist Nicolas Lebourg, cited a recent poll showing that 60 percent of the French believe the party endangers French democracy. “They are very good in the first round, but they crash in the second,” Mr. Lebourg said Sunday night of the National Front.

Mainstream politicians appearing on television Sunday night all looked relieved in the wake of the Front’s resounding defeat. “I thank the voters who have protected our beautiful region,” said the right’s candidate in the north, Xavier Bertrand, who beat Ms. Le Pen.

In the first round of voting last week, the National Front came in first in six of the 13 regions, alarming France’s political and media establishment. With 28 percent of the vote, the far-right party achieved its best result ever, three percentage points better than in European elections last year, its previous best.

Fearing a Front takeover in two regions where Socialist candidates finished third — the north around Lille, where Ms. Le Pen was running, and the south around Nice, where her niece was the top candidate — the Socialist Party withdrew its candidates for the second round. The hope was that Socialist voters would then block the Front by voting for the mainstream conservative Republicans.

That hope apparently paid off.

The two part nature of French electoral politics has frustrated the ambitions of the National Front in the past, of course, so it’s not entirely surprising to see it happen this time around. Nonetheless, the fact the system, combined with the manner in which the two major national parties basically worked together at the local level to deny victories to the Front in races that they otherwise likely would have won must be particularly frustrating to supporters, Indeed, the reports regarding the manner in which Marine Le Pen responded to the outcome would indicate precisely that, and perhaps provides a preview of the campaign French voters will see from her and her party as France heads toward Presidential and national legislative elections in 2017. The question for Le Pen, and the rest of French politics, will be whether events between now and then end up helping the National Front by playing into its anti-immigrant, nationalist rhetoric in the face of increased immigration from the Middle East and the threat of terrorism.

In that regard, The Telegraph’s Henry Samuel argues that, notwithstanding its defeats in the second round of the elections yesterday, the National Front remains well-positioned for further electoral success:

Down but by no means out, the Front National may have failed to clinch a single region in France but it still has the wind in its sails after smashing its previous record in a national election.

There is no denying that the result is a disappointment for Marine Le Pen, but her claim that “nothing can stop us” is more than mere hyperbole.

The far-Right won 6.6 million votes on Sunday. That is almost 200,000 more than for leader Marine Le Pen in the 2012 presidential elections despite a far lower turnout this time – down 20 percentage points.

The FN now has an army of regional councillors, tripling its previous number around the country and turning it into an opposition force to be reckoned with. That not only stands Ms Le Pen in good stead for the presidential elections of 2017 but changes the entire French political landscape.

Meanwhile, the mainstream parties can claim little more than a Pyrrhic victory.

Although it came top with seven regions, Nicolas Sarkozy’s conservative The Republicans is in a sense the biggest loser as the outcome suggests the historic dam between the mainstream and far-Right parties is now “porous”.

True, it wrested control of the Paris region for the first time in 17 years, but it only kept the FN at bay in two key regions – Nord-Pas-de-Calais-Picardy and Provence-Alpes-Côte-d’Azur – after the Socialists dropped out and their supporters voted tactically.

The mainstream Right is now bracing itself for a bitter battle over where to place the ideological cursor. Should it take a hard-Right line à la Sarkozy or opt for the more moderate and inclusive stance of, say, Alain Juppé, current mayor of Bordeaux? There were calls on Monday to bring forward party primaries from next autumn to the spring to settle that question.

At root, the regionals are little more than a dry run for a far higher-stakes contest – the 2017 presidential election.

Both Left and Right claimed on Sunday night to be the final rampart against the FN taking national power. That is hardly surprising. With Marine Le Pen currently polling to reach round two of in 2017, there can only be one other candidate in the presidential run-off.

The battle for who that will be has only just begun.

Making it into the top two in the Presidential election would certainly be seen as a big win for Le Pen and the National Front, even more so given the fact that three years ago, Le Pen came in third place in the first round of France’s Presidential election with nearly 18% of the vote, although she was some three million votes behind former French President Nicolas Sarkozy. In that same election, her party only ended up winning two seats in the legislature and actually got nearly three million fewer votes than LePen received as a Presidential candidate. Given that pattern, and what happened on Sunday, one would expect that Le Pen would have a hard time winning a Presidential election since the supporters of whichever major party failed to make the runoff would seem more likely to back the nominee of the other party than to back Le Pen, but that doesn’t take into account either the fact that the National Front has increased its levels of support in France generally, or the extent to which external events may influence French voters and French politicians over the coming two years. President Hollande, for example, was not exactly a strong advocate of military action against ISIS prior to the terror attack in Paris, but in the month since then he has increased French involvement in the war against ISIS and traveled the world attempted for forge some kind of international consensus and perhaps even a coalition. To no small degree this seems to have been a reaction on his part to his own domestic political situation, which by all accounts was weakening prior to the attacks. If Europe continues to experience an influx of refugees and even future terror attacks the message of the National Front, which French voters still seem largely inclined to reject, seems likely to become more well-received not unlike the nationalist paranoia of politicians of Donald Trump seems to be hitting the right note with many voters here in the United States.

So yes, the National Front suffered a setback on Sunday but they’re far from done for and seem poised to do better in the coming years.