Frustrations with the mercurial leader of Afghanistan may increase the pace of the U.S. withdrawal from Afghanistan. 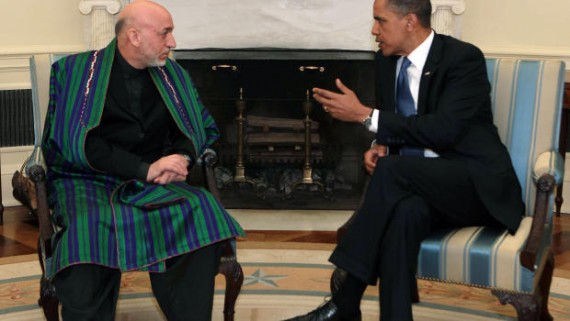 The end of American military involvement in Afghanistan seems to be heading down the same road as our involvement in Iraq, which ended with the withdrawal of the last American troops into Kuwait in December 2011. In the later case, you may recall, the United States was faced with the expiration of a Status Of Forces Agreement originally negotiated by the Bush Administration that called for an end to American troop presence in the country no later than December 31, 2011. In the months that led up to that deadline, there were efforts by the United States to negotiate a follow-on agreement of some kind that would have permitted the continued stationing of at least some contingent of American troops in country, primarily for training purposes. Those negotiations ultimately went nowhere because Iraqi Prime Minister Nouri al-Malaki could never get agreement from the various members of his political coalition to such an agreement, specifically to those provisions that would have protected American troops from being tried in Iraqi courts. So, by the end of December 2011, there were no American troops left in Iraq some eight years after we had invaded the country.

Today, we find ourselves about a year and a half away from the December 31, 2014 deadline to withdraw American troops from Afghanistan, bringing to an end a war that began in October 2001 in the wake of the September 11th attacks. There has been talk for months about how large a force the United States might leave behind after that point, both for training purposes and to continue with certain anti-terrorist activities against al Qaeda elements along the Afghanistan/Pakistan border. According to a new report in The New York Times, though, it appears as though our negotiations with the leadership in Kabul are proving as unsuccessful as our negotiations with Baghdad were:

WASHINGTON — Increasingly frustrated by his dealings with President Hamid Karzai, President Obama is giving serious consideration to speeding up the withdrawal of United States forces from Afghanistan and to a “zero option” that would leave no American troops there after next year, according to American and European officials.

Mr. Obama is committed to ending America’s military involvement in Afghanistan by the end of 2014, and Obama administration officials have been negotiating with Afghan officials about leaving a small “residual force” behind. But his relationship with Mr. Karzai has been slowly unraveling, and reached a new low after an effort last month by the United States to begin peace talks with the Taliban in Qatar.

Mr. Karzai promptly repudiated the talks and ended negotiations with the United States over the long-term security deal that is needed to keep American forces in Afghanistan after 2014.

A videoconference between Mr. Obama and Mr. Karzai designed to defuse the tensions ended badly, according to both American and Afghan officials with knowledge of it. Mr. Karzai, according to those sources, accused the United States of trying to negotiate a separate peace with both the Taliban and their backers in Pakistan, leaving Afghanistan’s fragile government exposed to its enemies.

Mr. Karzai had made similar accusations in the past. But those comments were delivered to Afghans — not to Mr. Obama, who responded by pointing out the American lives that have been lost propping up Mr. Karzai’s government, the officials said.

The option of leaving no troops in Afghanistan after 2014 was gaining momentum before the June 27 video conference, according to the officials. But since then, the idea of a complete military exit similar to the American military pullout from Iraq has gone from being considered the worst-case scenario — and a useful negotiating tool with Mr. Karzai — to an alternative under serious consideration in Washington and Kabul.

The officials cautioned that no decisions had been made on the pace of the pullout and exactly how many American troops to leave behind in Afghanistan. The goal remains negotiating a long-term security deal, they said, but the hardening of negotiating stances on both sides could result in a repeat of what happened in Iraq, where a deal failed to materialize despite widespread expectations that a compromise would be reached and American forces would remain.

“There’s always been a zero option, but it was not seen as the main option,” said a senior Western official in Kabul. “It is now becoming one of them, and if you listen to some people in Washington, it is maybe now being seen as a realistic path.”

The official, however, said he hoped some in the Karzai government were beginning to understand that the zero option was now a distinct possibility, and that “they’re learning now, not later, when it’s going to be too late.”

The Obama administration’s internal deliberations about the future of the Afghan war were described by officials in Washington and Kabul who hold a range of views on how quickly the United States should leave Afghanistan and how many troops it should leave behind. Spokesmen for the White House and Pentagon declined to comment.

Within the Obama administration, the way the United States extricates itself from Afghanistan has been a source of tension between civilian and military officials since Mr. Obama took office. American commanders in Afghanistan have generally pushed to keep as many American troops in the country as long as possible, creating friction with White House officials urging a speedier military withdrawal.

But with frustrations mounting over the glacial pace of initiating peace talks with the Taliban, and with American relations with the Karzai government continuing to deteriorate, it is unclear whether the Pentagon and American commanders in Afghanistan would vigorously resist if the White House pushed for a full-scale pullout months ahead of schedule.

As it stands, the number of American troops in Afghanistan — around 63,000 — is scheduled to go down to 34,000 by February 2014. The White House has said the vast majority of troops would be out of Afghanistan by the end of that year, although it now appears that the schedule could accelerate to bring the bulk of the troops — if not all of them — home by next summer, as the annual fighting season winds down.

Talks between the United States and Afghanistan over a long-term security deal have faltered in recent months over the Afghan government’s insistence that the United States guarantee Afghanistan’s security and, in essence, commit to declaring Pakistan the main obstacle in the fight against militancy in the region.

Now, it’s entirely possible that this is all part of the back-and-forth between the Administration and the Karzai regime regarding negotiation of the future status of U.S. forces in the country. The U.S. has made clear since January that the so-called “Zero Option” was on the table if negotiators were unable to come to a mutually acceptable agreement. Since then, President Karzai has engaged in much bizarre behavior, including accusing the United States of colluding with the Taliban against him and, when the Taliban opening their office in Qatar recently, of negotiating with them behind his back. Add into that all the other issues we’ve had with Karzai over the years, and it doesn’t stretch credulity at all to believe that he is acting unreasonably in these negotiations to the point where President Obama is willing to consider the idea of pulling all U.S. troops out of the country at the end of 2014.

Now, personally, I don’t have many objections to the idea of a “zero option” in Afghanistan. Leaving behind a small contingent of American troops, even as just a training force, in a nation where attacks even by our supposed friends in the Afghan Armed Force and Police have become an all-too-common occurrence, strikes me as little more than an invitation for someone to attack these sitting ducks, at which point we’d be faced with the choice of either retaliating or facing up to the reality of the situation in that country once and for all. At the same time, though, one can make a fairly good case in favor of keeping at least some U.S. presence in the country both to continue training the Afghans and to act as a counter-terrorism force while monitoring for a possible al Qaeda return to the country. Indeed, by all indications, that is the advice that President Obama is getting from his foreign policy and military advisers right now. But then, he was also getting the same advice about Iraq and was unable to pull anything off because the negotiators on the other side of the table were unwilling to make a deal. If Karzai proves to be just as intransigent, then pulling out completely is the only option Obama will have, and the future of Afghanistan will be fully in the hands of Karzai and his cronies. Something tells me they’ll rape the country for as much profit as they can before hopping a plane to the Gulf States when their enemies finally come for them.