Hamid Karazi says that the United States needs to reduce it's military presence in his country. Perhaps we should listen to him. 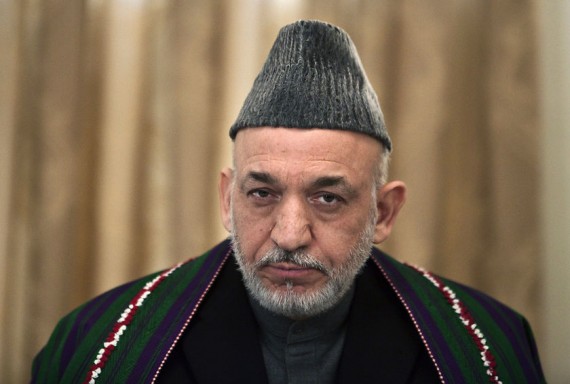 Afghanistan’s President, who has become a thorn in America’s side in recent years thanks to allegations of corruption, election fraud, and secret deals with Iran, is now saying that he thinks the United States needs to reduce its military presence in his country:

President Hamid Karzai said on Saturday that the United States must reduce the visibility and intensity of its military operations in Afghanistan and end the increased U.S. Special Operations forces night raids that aggravate Afghans and could exacerbate the Taliban insurgency.

In an interview with The Washington Post, Karzai said that he wanted American troops off the roads and out of Afghan homes and that the long-term presence of so many foreign soldiers would only worsen the war. His comments placed him at odds with U.S. commander Gen. David H. Petraeus, who has made capture-and-kill missions a central component of his counterinsurgency strategy, and who claims the 30,000 new troops have made substantial progress in beating back the insurgency.

In an hour-long interview with Post reporters and editors in his office in Kabul, Karzai said he was speaking out not to criticize the United States but in the belief that candor could improve what he called a “grudging” relationship between the countries. He described his own deep skepticism with American policy in Afghanistan – from last year’s presidential election, which he said was manipulated by U.S. officials, to his conviction that government corruption has been caused by billions of American dollars funneled to unaccountable contractors. And he said Afghans have lost patience with the presence of American soldiers in their homes and armored vehicles on their roads.

Karzai has long been publicly critical of civilian casualties at the hands of U.S. and NATO troops and has repeatedly called for curtailing night raids into Afghan homes. Under Petraeus and his predecessor, such raids by U.S. Special Operations troops have increased sharply, to about 200 a month, or six times the number being carried out 18 months ago, said a senior NATO military official, who requested anonymity so that he could speak candidly about the situation. These operations capture or kill their target 50 to 60 percent of the time, the official said.

To American commanders, the nighttime strike missions are a crucial weapon to capture Taliban commanders, disrupt bomb-making networks and weaken the 30,000-man insurgency in Afghanistan. In the past three months, U.S. Special Operations troops have killed or captured 368 insurgent leaders. On each mission, Afghan commandos accompany U.S. troops and Afghan officers work with the Special Operations command at Bagram Airfield to choose targets, military officials said.

“We understand President Karzai’s concerns, but we would not be as far along as we are pressuring the network had it not been for these very precision operations we do at night,” the NATO military official said. “I don’t see any near-term alternative to this kind of operation.”

But Karzai was emphatic that U.S. troops must cease such operations, which he said violate the sanctity of Afghan homes and incite more people to join the insurgency. A senior Afghan official said that Karzai has repeatedly criticized the raids in meetings with Petraeus and that he is seeking veto power over the operations. The Afghan government does not have the type of legal arrangement that the Iraqi government has with U.S. forces to approve particular military operations.

“The raids are a problem always. They were a problem then, they are a problem now. They have to go away,” Karzai said. “The Afghan people don’t like these raids, if there is any raid it has to be done by the Afghan government within the Afghan laws. This is a continuing disagreement between us.”

Karzai, who said during his inaugural speech last year that he would like to have full Afghan security control by 2014, said that the U.S. military “should and could” draw down its forces next year. He acknowledged that an abrupt withdrawal would be dangerous, but said that American soldiers should confine themselves more to their bases and limit themselves to necessary operations along the Pakistani border. He said he wanted the U.S. government to apply more pressure on Taliban sanctuaries in Pakistan while focusing on development projects and civilian assistance in Afghanistan.

Karzai’s statements come only a few days after it was reported that the upcoming review of U.S. policy in Afghanistan would result in abandonment of the July 2011 date for the beginning for withdrawal of U.S. forces, extending that period to some point in 2014 or beyond. However, these comments raise the question of just how we can go forward with that policy, or with the current counter-insurgency strategy that is at the heart of the tactics that Karzai is criticizing, without the support of the very government that we’re supposed to be defending. Realistically, it’s unclear how long we can continue our presence in Afghanistan if the government doesn’t want us there, or at least doesn’t want us there in such a visible role.

We’ve gone back and forth over the issue of the U.S. mission in Afghanistan here at OTB for months now, and I think that an observation Dave Schuler made back in May is even more true today:

Counter-insurgency, the strategy we’re currently employing in Afghanistan, is peculiarly unsuited to the country. You can’t establish security for the people of Afghanistan, one of the necessary steps in a counter-insurgency strategy, by securing a few urban areas. If President Obama has been told this by his advisors, he has been cruelly misinformed. Unlike Iraq Afghanistan is overwhelmingly rural with some 80% of its population living out in its countryside. Villages in some provinces aren’t even reachable by road from the provincial capitol. The number of troops required for successful counter-insurgency in Afghanistan is daunting and Afghanistan’s poverty, lack of education, and faction ensure it will be virtually impossible for Afghanistan to supply most of those troops for the foreseeable future.

The Afghan government enjoys less of its people’s confidence that do the American forces there, if anything. It’s in no position to be a partner either in creating the conditions for a transition, contributing to the “civilian surge”, or even taking part in a transition.

Without a stable partner in Kabul — which is something that we simply cannot create on our own — our efforts there are doomed to failure.

One final comment from Karzai’s interview is worth noting:

Karzai said he was grateful to the American people for their support, particularly the flood of taxpayer money for new schools, roads, clinics and other development projects. But he questioned the Obama administration’s motives. Karzai said he has become accustomed to the barrage of criticism against him and his family – allegations including graft and drug trafficking. The U.S. ambassador to Afghanistan, Karl Eikenberry, wrote in a cable last year that Karzai was not an adequate strategic partner and warned against sending troops to bolster such a troubled government.

“If a partner means a silent spectator of events conducted by Washington, if that kind of partner you seek, well, I’m not that partner,” Karzai said. “Nor will be the Afghan people.”

Perhaps we should take that as a warning that our “ally” may not be an ally for long.

U.S. Hands Control Of Night Raids Over To Afghans