The Obama administration is arguing the 14th Amendment renders the debt ceiling moot. 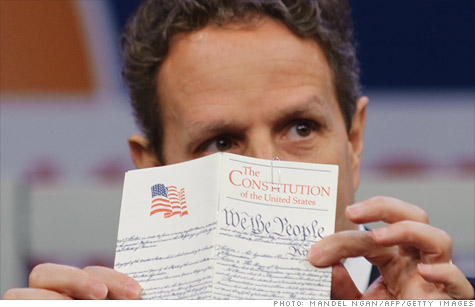 In our recent discussion over whether the 14th Amendment rendered the debt ceiling unconstitutional, commenter Andyman remarked, “I’d like to see someone from the administration (Geithner?) say something sympathetic about this line of thinking. Just to put the marker down that Obama isn’t ruling out just carrying on as if the debt ceiling doesn’t exist.”

Well, someone from the administration (Geithner!) has done just that:

At a Politico Playbook breakfast on May 25, Geithner was asked by host Mike Allen about the negotiations over default and the debt ceiling.

“I think there are some people who are pretending not to understand it, who think there’s leverage for them in threatening a default,” Geithner said. “I don’t understand it as a negotiating position. I mean really think about it, you’re going to say that– can I read you the 14th amendment?”

Geithner whipped out his handy pocket-sized Constitution. Allen tried to brush it aside. “We’ll stipulate the 14th Amendment,” he said.

“No, I want to read this one thing,” Geithner insisted.

“It’s paper clipped!” Allen observed, noting that Geithner’s copy of the Constitution was clipped so that it would open directly to the passage in question.

“‘The validity of the public debt of the United States, authorized by law, including debts incurred for the payments of pension and bounties for services in suppressing insurrection or rebellion’ — this is the important thing — ‘shall not be questioned,” Geithner read.

“So as a negotiating strategy you say: ‘If you don’t do things my way, I’m going to force the United States to default–not pay the legacy of bills accumulated by my predecessors in Congress.’ It’s not a credible negotiating strategy, and it’s not going to happen,” Geithner insisted.

Now, as with many constitutional provisions, this clause is subject to interpretation.  But Jack Balkan’s essay on “The Legislative History of Section Four of the Fourteenth Amendment” makes a persuasive case that Geithner is on firm ground. It’s worth reading in full but here’s a taste:

Senator Benjamin Wade of Ohio was a leader of the Radical Republicans and the President pro tempore of the Senate. He agreed with Howard’s reasons for why the Confederate debt should be repudiated, but he argued that if the concern was to avoid future disruption of American politics, the current proposal did not go far enough. It was also necessary to guarantee the Union debt, because former rebels or rebel sympathizers who returned to Congress after the war might, out of selfish or malicious motives, seek to prevent Union soliders and their widows from being compensated. Moreover, there was no guarantee of what a later Congress, motivated by different priorities, might do. Shifting majorities in a future Congress might be willing to sacrifice the public debt or the interests of pensioners in the name of political expediency. Thus, it was as important to guarantee the Union debt as it was to repudiate the Confederate debt.

If Wade’s speech offers the central rationale for Section Four, the goal was to remove threats of default on federal debts from partisan struggle. Reconstruction Republicans feared that Democrats, once admitted to Congress would use their majorities to default on obligations they did disliked politically. More generally, as Wade explained, “every man who has property in the public funds will feel safer when he sees that the national debt is withdrawn from the power of a Congress to repudiate it and placed under the guardianship of the Constitution than he would feel if it were left at loose ends and subject to the varying majorities which may arise in Congress.”

Like most inquiries into original understanding, this one does not resolve many of the most interesting questions. What it does suggest is an important structural principle. The threat of defaulting on government obligations is a powerful weapon, especially in a complex, interconnected world economy. Devoted partisans can use it to disrupt government, to roil ordinary politics, to undermine policies they do not like, even to seek political revenge. Section Four was placed in the Constitution to remove this weapon from ordinary politics.

That strikes me not only as a reasonable reading of the Constitutional but a prudent principle of public policy. But, again like many provisions of the Constitution, there’s no specification on the mechanism as to how it should be enforced. Undermining the notion that the Executive has the right to ignore laws that stand in the way of default–in this case, the debt limit–is the next line in the Amendment:

Section 5. The Congress shall have power to enforce, by appropriate legislation, the provisions of this article.

Rather clearly, it is the legislature, not the executive, which has the responsibility to act. What if it abrogates that responsibility? Presumably, the president can do what presidents do: Act and dare the legislature to do something about it. Impeachment is unlikely, even with a Republican House. And the courts would almost certainly see this as a “political question” and stay away.