The plan by one fringe church in Gainesville, Florida to burn copies of the Koran on September 11th is igniting fires of protest across the Muslim world. 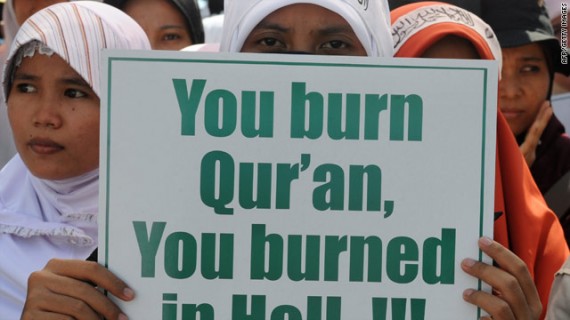 General David Petraeus has issued a strong condemnation of the plans by a fringe church in Florida to burn copies of the Koran on September 11th and calls it a threat to the safety of American troops in Afghanistan:

KABUL—The top U.S. commander in Afghanistan said the planned burning of Qurans on Sept. 11 by a Florida church could put the lives of American troops in danger and damage the war effort.

Gen. David Petraeus said the Taliban would exploit the demonstration for propaganda purposes, drumming up anger toward the U.S. and making it harder for allied troops to carry out their mission of protecting Afghan civilians.

“It could endanger troops and it could endanger the overall effort,” Gen. Petraeus said in an interview with The Wall Street Journal. “It is precisely the kind of action the Taliban uses and could cause significant problems. Not just here, but everywhere in the world we are engaged with the Islamic community.”

Petraeus made these statements in the wake of protests in Afghanistan and elsewhere by Muslims who don’t seem to understand that this Church in Florida does not represent the United States as a whole:

KABUL, Afghanistan (AP) — Hundreds of Afghans railed against the United States and called for President Barack Obama’s death at a rally in the capital Monday to denounce an American church’s plans to burn the Islamic holy book on Sept. 11.

The crowd in Kabul, numbering as many as 500, chanted “Long live Islam” and “Death to America” as they listened to fiery speeches from members of parliament, provincial council deputies, and Islamic clerics who criticized the U.S. and demanded the withdrawal of foreign troops from the country. Some threw rocks when a U.S. military convoy passed, but speakers shouted at them to stop and told police to arrest anyone who disobeyed.

The Gainesville, Florida-based Dove World Outreach Center announced plans to burn copies of the Quran on church grounds to mark the ninth anniversary of the 9/11 terrorist attacks, but has been denied a permit to set a bonfire. The church, which made headlines last year after distributing T-shirts that said “Islam is of the Devil,” has vowed to proceed with the burning.

“We know this is not just the decision of a church. It is the decision of the president and the entire United States,” said Abdul Shakoor, an 18-year-old high school student who said he joined the protest after hearing neighborhood gossip about the Quran burning.

There were similar protests in Indonesia, where the pull of radical Islam is not nearly as strong as it is in the Middle East:

Jakarta, Indonesia — Thousands of Indonesians gathered Sunday outside the U.S. Embassy in Jakarta to protest a Florida church’s plan to burn copies of the Quran.

The Dove World Outreach Center in Gainsville, Florida, plans to mark the ninth anniversary of the September 11 attacks by burning copies of the Muslim holy text. The center describes itself as a “New Testament church based on the Bible.” It made headlines last year when it distributed a T-shirt that said, “Islam is the devil.”

Protesters in Jakarta carried signs saying, “Jihad to protect Koran” and “You burn qu’ran you burn in hell.” The protesters included members of the hard-line Muslim group Hizb ut-Tahrir Indonesia and the pluralism care movement, a multi-faith group.

“We hope that the U.S. government to stop this plan. We represent Muslim, Christians and other religions who all wants to avoid any clashes as a result,” Damien Dematra, the coordinator for the pluralism care movement, said in a news statement.

Of course, there isn’t anything the U.S. Government either can or should do to stop this Church from engaging in this activity. As distasteful as their actions are, they are protected speech and the idea of the state taking legal action because someone does something offensive to another religion is a concept that is simply alien to contemporary Americans.

The problem I see is that I don’t think the people protesting what this church is doing quite understand that. For the most part, nations like Afghanistan and Indonesia don’t have a concept of Freedom of Speech, or Freedom of Religion, that is anything like what we have in the United States. In many cases, the distinction between religion and state is one without a difference, much in the same way that the Church and State were nearly one in many European kingdoms prior to the Reformation.When the U.S. Embassy issues a statement condemning the action but the U.S. Government takes no steps to stop the even from occurring, I’m sure it sounds like hypocrisy to people who live in a world like this. Not to mention the fact that this is precisely the kind of event that groups like al Qaeda and the Taliban exploit to convince people that the United States is in fact at war with all of Islam.

I’m not sure what the answer to this dilemma is. In the best of all worlds, the Dove World Outreach Center would realize that what they plan to do is counterproductive and decide to cancel it on their own. If they don’t, however, then I’m not sure what the United States can to do convince the people taking part in these protests that they don’t represent all of America.