Declassified U.S. military analyses of the calamitous exit from Afghanistan detail repeated instances of friction between American troops and diplomats before and during the evacuation, concluding that indecisiveness among Biden administration officials and initial reluctance to shutter the embassy in Kabul sowed chaos and put the overall mission at “increased risk.”

Two “after action” reports were prepared by officials assigned to U.S. Central Command in September, about three weeks after the final planeload of military personnel departed Hamid Karzai International Airport. The assessments appear to affirm separate accounts of senior U.S. commanders frustrated by what they characterized as sloppy, misguided management of the withdrawal.

As The Washington Post first reported Tuesday, military leaders who coordinated the evacuation fault officials in the White House and the State Department whom, they say, failed to respect the Taliban’s swift advance last year and resisted pleas from the military to prepare for an evacuation weeks before Kabul’s fall.

The declassified after-action analyses are contained within an official report detailing the military’s investigation of an Aug. 26 suicide bombing outside the airport’s Abbey Gate that killed an estimated 170 Afghans and 13 U.S. service members. The report, obtained by The Washington Post through a Freedom of Information Act request, comprises dozens of witness interviews, findings of fact, and other official government records. Spanning 2,000 pages, it presents the most extensive, unvarnished account to date of the United States’ 17-day race to end its longest war.

The existence of the after-action reports contradicts claims made Friday by White House press secretary Jen Psaki, who has joined President Biden and other administration officials in seeking to downplay the significance of U.S. commanders’ remarks.

“I think it’s important for people to understand that there was no after-action report,” Psaki told reporters in the White House briefing room.

A National Security Council official — who, like some other officials, spoke on condition of anonymity because of the sensitivity of the issue — said Saturday that Psaki’s statement from the podium referred to a forthcoming, more extensive review of the war’s endgame.

“Many people have wrongly conflated the Abbey Gate report and documents released to The Washington Post with the Pentagon’s after-action review of Afghanistan — a broad report that will examine the final months of America’s longest war, beginning in February 2020,” the official said, referencing the month that President Donald Trump made a deal with the Taliban, setting the stage for a withdrawal of all U.S. troops.

So, I think this is unfair to Psaki. There were doubtless dozens of “after-action reports” by various military organizations. The practice has long been embedded in the culture. Whether she knows that, I have no idea. But I believe her answer was indeed about a forthcoming, comprehensive report that will have been staffed through the interagency.

For that matter, even though I draw a paycheck from the Defense Department and have done so off and on throughout my career, it seems obvious even from Lamothe’s description that the AARs he got through the FOIA request are one-sided. That the military brass, which is understandably more tied to sunk costs than diplomats and administration officials, were frustrated by the timetables and the failures to provide more security, is hardly surprising. But, after all, they didn’t want to leave to begin with. The generals never want to abandon a mission that hasn’t been accomplished—even if it’s been ongoing for two decades and accomplishment is a fool’s errand.

Still, the report is damning:

President Biden said in an interview with NBC News on Thursday that he was “rejecting” the commanders’ accounts, though White House officials said later that he accepted the narrow, overall findings of the Abbey Gate report. On Tuesday, State Department spokeswoman Jalina Porter described the comments of the military officials as having been “cherry-picked” from the larger report. A State Department official said Saturday that he could not comment on the Defense Department’s after-action analyses.

The after-action reviews included in the Abbey Gate report were completed by U.S. Forces-Afghanistan Forward, the military headquarters that oversaw the withdrawal, and Joint Task Force-Crisis Response, a unit led by the U.S. Marine Corps that also was involved. Their findings closely hew to observations made by Rear Adm. Peter Vasely and Brig. Gen. Farrell Sullivan, who were responsible for coordinating the evacuation.

The after-action report by U.S. Forces-Afghanistan Forward, which Vasely oversaw, is dated Sept. 24 and titled “Operation Allies Refuge,” the name the Biden administration assigned to the evacuation mission. It determined that decisions to delay reducing the size of the U.S. Embassy’s staff in Kabul and declare a formal evacuation of American citizens and Afghan allies complicated the military’s ability to execute its mission.

An Aug. 10 interagency tabletop exercise to rehearse the evacuation “identified the deteriorating situation which predicted the full isolation of Kabul within the next 30 days,” but no decision to evacuate was made then, according to the report. Instead, a day later embassy staff informally requested military support to gradually downsize and shift operations to the airport “over a 17 day period,” the report said.

In their witness statements to Army officials investigating the airport bombing, Vasely and other officers described the delayed evacuation as fateful.

U.S. troops would have been “much better prepared to conduct a more orderly” evacuation, Vasely told the investigators, “if policymakers had paid attention to the indicators of what was happening on the ground.”

Even the tabletop exercise didn’t predict a collapse as rapid as the one that ultimately happened.

Regardless, “frictions” are simply inevitable. The military brass will always be in maximum “security” and “force protection” modes whereas diplomats will naturally want the embassy as open as possible in order to conduct operations. Further, months into a new administration, the National Security Council team is just starting to take shape, making coordination even more challenging than usual.

The Biden team doubtless made mistakes here although they and commanders on the ground adjusted remarkably quickly to an incredibly chaotic situation. And I’m not sure our hasty withdrawal could have been pulled off smoothly under the circumstances. 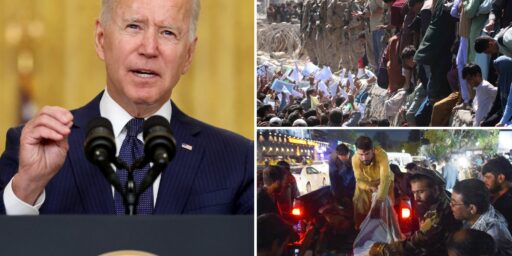