George Will: Donald Trump Is ‘A Bloviating Ignoramus With A Very Low IQ’

George Will pretty much says everything that needs to be said about the Romney campaign’s bizarre embrace of Donald Trump:

Conservative columnist George Will criticized Donald Trump with colorful language on Sunday when asked on ABC’s “This Week” whether it helps Mitt Romney to ally with the billionaire real estate mogul.

“I do not understand the cost-benefit here,” Will said. “The costs are clear. The benefits – what voter is going to vote for him because he’s seen with Donald Trump? The cost of appearing with this bloviating ignoramus is obvious, it seems to me. Donald Trump is redundant evidence that if your net worth is high enough, your IQ can be very low, and you can still intrude into American politics.”

“But again – I don’t understand the benefit. What is Romney seeking?” he added.

Trump’s money perhaps? A Trump-funded SuperPAC that savages Obama for the next five months? What exactly would Romney do about such a SuperPAC running birther ads between now and November 6th?

Here’s the video via Mediaite: 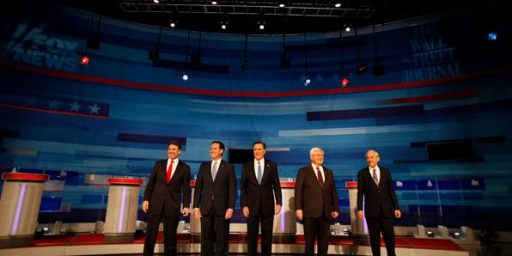 Republicans Clash In The Battle Of Myrtle Beach