Virginia has helped winnow the Republican field. You're welcome America. 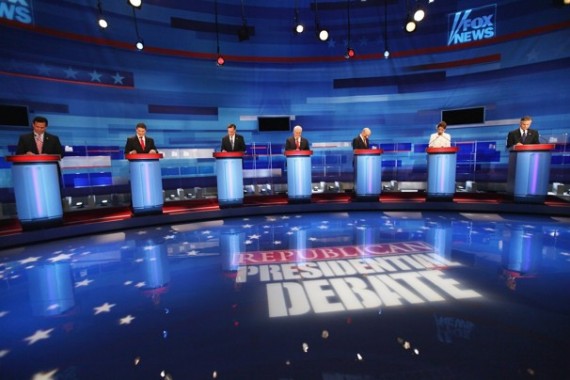 Much has been written since the announcement early Saturday morning that Rick Perry and Newt Gingrich had joined Jon Hunstman, Michele Bachmann, and Rick Santorum in being barred from the ballot for Virginia’s March 6th primary. In the case of Huntsman, Bachmann, and Santorum, the decision wasn’t at all a surprise since those three campaigns had failed to even submit petition signature packages to the State Board Of Elections by the 5pm on December 22nd deadline. Perry and Gingrich, however, had submitted their petitions. Gingrich even changed his campaign schedule last week and held a late rally in Arlington for the express purpose of gathering signatures. As for Perry, there was no indication that he was in similar trouble as Gingrich, but it was reported afterwards that his campaign had only begun gathering signatures in the Old Dominion in November, far later than recommended and far later than Mitt Romney’s campaign, which began its petition drive before Labor Day. As it turned out, both Perry and Gingrich had barely gotten in under the wire. Where Romney had submitted more than 16,000 signatures, and Ron Paul more than 14,000, Gingrich and Paul and both submitted just about 10% more than the required 10,000 signatures, leaving very little margin for error. As it turns out, it wasn’t enough.

There are several aspects to this story that haven’t been fully reported, and they have to do with the history of Virginia’s Presidential Primary. Prior to 1988, there was no primary in Virginia at the Presidential level. Until that point, the Presidential candidates of the Democratic and Republican parties participated in a caucus or convention that was, not surprisingly, largely dominated by party insiders on both sides. The state decided to hold a primary in 1988, likely in an effort to gain more prominence for the Commonwealth in the first election since 1968 where there would not be an incumbent President running on either party’s ticket. That year, the standards were apparently fairly liberal and a candidate was allowed on the ballot if they had been “prominently discussed in the news media, or who had qualified for primary season matching funds.” (Source: Ballot Access News) George H.W. Bush won the Republican Primary that year. The Democratic Primary was won by Jesse Jackson.

Whether it was because of that Jackson win or for other reasons, Virginia didn’t hold a primary in 1992 or 1996 and reverted back to the caucus/convention model. The Virginia primary came back in 2000, but this time candidates had to submit ballot access petitions. The rules were the same as they are now, at least 10,000 signatures with at least 400 from each of Virginia’s Congressional Districts. That same system was in effect in 2004 and 2008, and for eight years pretty much any candidate who submitted a petition package with at least 10,000 raw signatures made it on the ballot. Then, just this year, an Independent candidate for the Virginia legislature filed a lawsuit against the Republican Party Of Virginia:

The only reason the Virginia Republican Party checked the signatures for validity for the current primary is that in October 2011, an independent candidate for the legislature, Michael Osborne, sued the Virginia Republican Party because it did not check petitions for its own members, when they submitted primary petitions. Osborne had no trouble getting the needed 125 valid signatures for his own independent candidacy, but he charged that his Republican opponent’s primary petition had never been checked, and that if it had been, that opponent would not have qualified. The lawsuit, Osborne v Boyles, cl 11-520-00, was filed in Bristol County Circuit Court. It was filed too late to be heard before the election, but is still pending. The effect of the lawsuit was to persuade the Republican Party to start checking petitions. If the Republican Party had not changed that policy, Newt Gingrich and Rick Perry would be on the 2012 ballot.

In other words, prior to this year, the RPV was allegedly not really checking the signatures submitted for validity. As long as a candidate submitted the raw number(s) required then they got on the ballot. The Democratic Party of Virginia apparently follows the same process and has not held its candidates to the high standard that the technicalities of the law require. Since the State Board of Elections relies entirely on the political parties to determine who is eligible for the primary ballot(s), this is apparently entirely legal. It does, however, make one wonder if other candidates would have found themselves in a similar situation in the past had their petitions been given more than a cursory examination.

As a legal matter, this history doesn’t appear to give either Gingrich or Perry any real avenue to appeal the RPV’s decision, however. For one thing, there is little time within which such a challenge could be filed and heard. The RPV meets to formally finalize its list of candidates tomorrow, and the SBOE meets on Thursday to formally set the ballot. After that, ballots will be printed, including absentee ballots and the thousands of ballots that will need to be mailed to Virginia residents who are active duty members of the military serving overseas. Moreover, the law sets forth what the requirements are and both the SBOE and the RPV recommended to candidates that they submit far more than the required number of required signatures in order to avoid being tossed because of invalid signatures. Ignorance of the law is not a defense here.

Long-time Virginia political blogger Norman Leahy argues that the Commonwealth of Virginia has done the nation a favor:

The State Board of Elections first notified the presidential campaigns on March 6th of the ballot access requirements. The campaigns have had since July 1st to collect the signatures they needed. They even had the great good fortune of having a statewide election in Virginia this November plus the annual gathering of Republican activists in early December to gather signatures.

Some obviously did. Others? Well, those jacket blurbs aren’t going to write themselves you know…

Getting on Virginia’s ballot was a test of organizational skill and grassroots strength. It was also something much more mundane: it tested whether campaigns could pay attention to a calendar and read instructions. For those complaining that Virginia’s rules are too tough — the ballot access requirements have been largely unchanged since 1999. If memory serves, this is the first time in the three election presidential election cycles since then that the bulk of the field failed to make the ballot.

Virginia, then, has done the nation a service. It has winnowed the Republican field in advance of, and with greater precision than, the place-proud voters of Iowa and New Hampshire. The press may not be aware of this yet, and certainly the partisans of each campaign will be loathe to admit it, but tickets to the Republican presidential nomination were issued at RPV headquarters in Richmond, Virginia last night.

Iowa and New Hampshire, in my opinion, are less valuable now as predictors of future candidate success thanks to Virginia’s ballot rules.  We’ve demonstrated that only Mitt Romney and Ron Paul have the organization or the resources (Romney has both, Paul has a die-hard organization) to win the nomination outright.

At this point, if the mainstream media wants to be accurate, they should only include Romney and Paul as legitimate candidates for the front-runner title.  And given Paul’s inability to poll over 20% in most the country, it seems clear that Romney will be the eventual nominee, barring some kind of miracle for anyone else.

Virginia just helped clear up the fog surrounding the Republican nomination and demonstrated just who are the real viable candidates.

A bit strong? Perhaps, but I think both men have a point. All of the campaigns had been notified of these standards for months. Nominating petitions were made available starting in July. (Of all the candidates, the only one who has an excuse in that regard is Rick Perry, who didn’t enter the race until August). By all accounts, Perry didn’t start a signature gathering campaign in Virginia, though, until November. We don’t know when Gingrich’s campaign started gathering signatures, but the fact that they had to hold a rally two days before the deadline and still only came in 1,050 signatures over the required limit suggests it was a pretty late start and that, but for that rally, they would not have even reached the 10,000 raw signature level.

This isn’t a failure of the Republican Party of Virginia. This isn’t a failure of Virginia law. These are two badly run, mismanaged campaigns that failed to do what needed to be done to get on the ballot in a state that has more delegates in play than Iowa and New Hampshire combined, and which will be a crucial swing state in the General Election.  I tend to think that the law itself needs to be changed, but the fact that the requirements are tough isn’t any excuse for not even trying to be competent in an effort to comply with them. So, yes, Virginia has done the nation a favor. We’ve shown you who is serious about running for President and who isn’t.