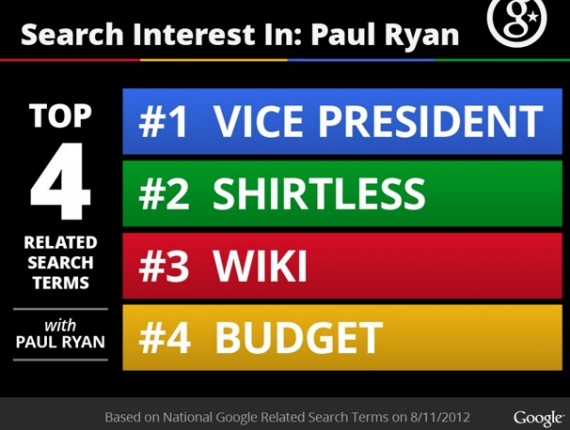 The announcement of Paul Ryan as Mitt Romney’s running mate has the guys at Google busy:

In the space of the past 24 hours, Wisconsin Rep. Paul Ryan went from an unknown to a figure of intense curiosity.

What did that curiosity center on? Well, of course, the fact that he was chosen by former Massachusetts governor Mitt Romney on Saturday to be the Republican vice presidential nominee. And, what he looked like without a shirt on. Not kidding.

According to the good people at Google, the most common search term tied to Ryan was “vice president”. The second most common was “shirtless”.

Some context helps explain the massive interest in seeing Ryan in a stage of undress. He is a workout fanatic and an acolyte of P90X, the rigorous core training regimen that has come into vogue in recent years. (The Fix, on the other hand, owns the P90X DVDs, which are resting comfortably in their sleeves in the basement at the moment.) Ryan is also a former personal trainer who prides himself on keeping his body fat in single digits. (Make sure to read this great Maeve Reston story in the L.A. Times on Ryan’s workout habits.)

That the desire to see Ryan half-naked trumped other things like, say, his budget proposal (“budget” was the fourth most common search term connected to Ryan, right behind “wiki”) tells you all you need to know about how the average person consumes politics.

Not my cup of tea but to each their own I suppose. I’m guessing there aren’t many searches for “Joe Biden shirtless,” though.