Guess Which Candidate Got The Most Press Coverage In 2010

She didn't gain national prominence until late August, and she's going to most likely lost by a wide margin tonight, but Christine O'Donnell received more coverage from the media than any other candidate running in 2010. 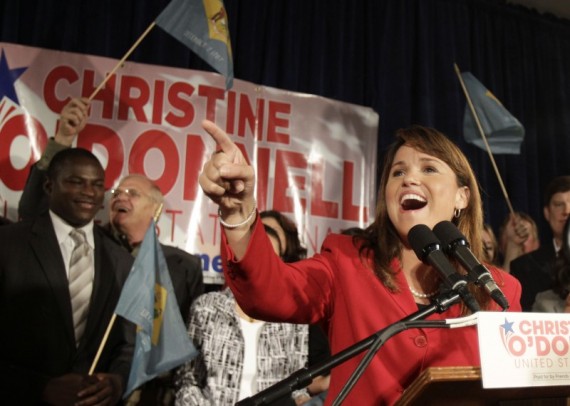 It was Christine O’Donnell:

Senate candidate Christine O’Donnell didn’t get too much national media coverage before upsetting the Republican establishment and winning the Delaware primary in September. But since then, O’Donnell’s been all over the news—confirming she’s not witch, questioning the separation of church and state, appearing in newly surfaced “Politically Incorrect” clips from the late ’90s, and starring in a salacious Gawker story.

In fact, O’Donnell has vaulted from zero national name recognition to garnering more coverage than any other 2010 candidate, according to research provided by Pew’s Project for Excellence in Journalism.

“The amount of coverage she’s gotten in a short amount of time is dramatic,” said PEJ Associate Director Mark Jurkowitz.

This is especially true considering that O’Donnell really didn’t burst on to the national scene until  just a few week before the September 14th Delaware primary. The first mention of Christine O’Donnell here on OTB was in this post on August 31st, which noted the fact that Tea Party Express had just announced that it was following up it’s surprise success in Alaska’s August 24th primary with an endorsement of O’Donnell over Mike Castle.

In that time, there have been 89 posts here that have mentioned O’Donnell in one context or another, but that’s nothing compared with the press attention, which was second only to that given the President of the United States:

Putting this in perspective, of course, it’s simply absurd that a candidate who has consistently trailed her Democratic opponent by double digits in a state with a smaller population than eleven U.S. cities would get this much attention. The reasons for this are numerous, but generally fall into two categories. First, O’Donnell has a history of making provocative statements that provide good fodder for cable news shows that often have very little real news to cover in the 24/7 news world that we live in. This is especially true given the literal library of material that Bill Maher released from the vaults of Politically Incorrect for his own reasons. Second, she’s an attractive female and that always makes for good television.

One would hope that this would be a lesson to the national media and that the amount of attention that they’ve given to a candidate who will most likely be making a concession speech within an hour or so after the polls close tonight will cause them to reconsider the way they cover politics. The truth is, of course, that it won’t because people like O’Donnell and Palin make for good television, and they will continue to get far more coverage than they probably deserve.