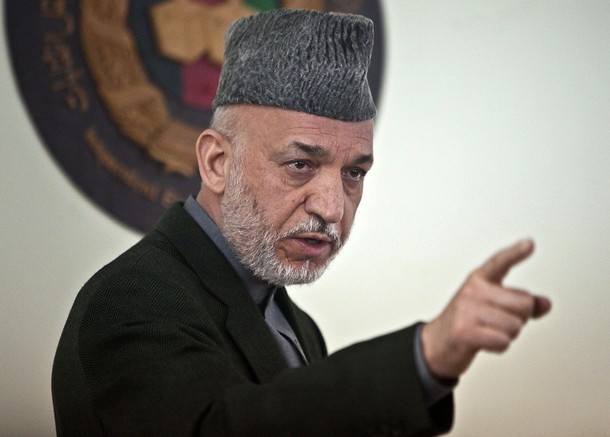 Now, he wants Congress to condemn the actions of one idiot in Florida:

The Afghan president, Hamid Karzai, appears to have added fuel to the violent protests in Afghanistan after calling on the US Congress to condemn a Christian preacher’s burning of the Qur’an.

Karzai’s demand came despite a statement from Barack Obama denouncing the behaviour of American pastor Terry Jones as “an act of extreme intolerance and bigotry”.

But the Afghan president, in a meeting on Sunday with the US ambassador, Karl Eikenberry, and David Petraeus, the US commander of Nato forces in the country, demanded that the top US lawmaking body should condemn Jones.

The report of the national security council meeting, issued by Karzai’s office, highlights the concern of some analysts that the president is pandering to the demands of anti-western protesters rather than attempting to quell violence that has already cost dozens of lives, including the seven UN officials killed by a mob in Mazar-e-Sharif on Friday.

Karzai has been bitterly criticised by some for drawing attention to the Qur’an fire in the first place. Though it was largely ignored by the media, Karzai issued a press release on 24 March, four days after the book-burning in Gainsville, Florida, condemning the “crime against a religion and entire Muslim umma [community]”. He said the US and UN should “bring to justice the perpetrators of this crime”.

It seems rather obvious at this point that Karazi is using this issue to pander to Islamic extremists in his country, even if it means setting off violent protests resulting in the deaths of innocent people. His decision to essentially reject the statement issued by President Obama would seem to guarantee that this will continue to be an issue in Afghanistan, and perhaps elsewhere in the Muslim world.

As for his demand itself, I don’t think Congress should get itself involved in this at all. If individual Congressman want to go public on the issue, that’s one thing, but the idea of the United States Congress condemning someone for doing something that is considered protected free speech strikes me as slightly outrageous. Karzai’s demand that Jones be punished is, of course, patently absurd.The world will simply have to accept the fact that the very idea of a blasphemy law is incompatible with our system of government.