Marco Rubio's performance in this week's debate is once again leading to speculation about whether is about to have a breakout moment. 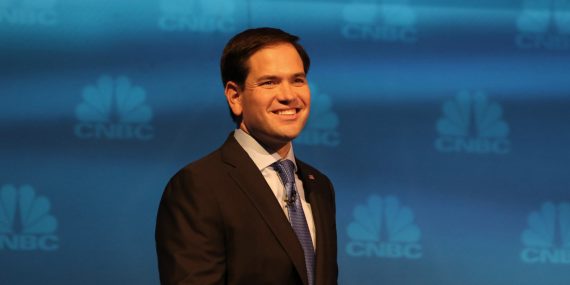 In the wake of another debate in which he seemed to outshine many of the other candidates, at least in the eyes of conservative pundits and opinion leaders, The Washington Post’s Karen Tumulty wonders if we’ve come to the Marco Rubio moment:

Sen. Marco Rubio was already cruising to a breakout performance in the latest GOP presidential debate when an attack from Donald Trump opened up more air time for him to respond according to the evening’s format.

“Well, I’ve learned the rules on this,” the senator from Florida said coolly, proceeding to swat back Trump with ease on the signature issue of the celebrity billionaire: immigration.

If Wednesday’s debate was any indication, Rubio has learned not only the rules but also the playbook. And he has reached the point where he appears ready to execute it.

Rubio showed during the debate that he could take a hit — and swing back — something that might have been in doubt, given his youth and the roughness of this election cycle. Until this point in the campaign, he has run a relatively low-key effort, not making a grab for the spotlight. His strategists have said he was waiting for a moment to put his natural political talents on display.

To many Republicans, the idea of electing a first-term senator who is long on eloquence but short on accomplishments seems uncomfortably reminiscent of then-Sen. Barack Obama’s run for the White House in 2008.

Then again, with the Iowa caucuses less than 100 days away, it is hard to imagine anyone else in the sprawling, fractious GOP field who is equipped to bring together the party’s establishment and insurgent wings.

“Marco is uniquely positioned to be able to unite the Republican Party,” Rubio spokesman Alex Conant said. “If Marco is the nominee, we will defeat Hillary Clinton. There is a very clear generational contrast between her message and Marco’s, and America is ready to turn the page.”

That could also be said of the signal that he is trying to send to his own party.

A pivotal moment of the debate was an exchange between Rubio and his one-time political mentor, former Florida governor Jeb Bush, whose famous last name has become as much a liability as an asset.

Bush criticized Rubio for missing more votes than any other senator this year.

“What is it, like a French workweek? You get, like, three days where you have to show up?” Bush said. “You can campaign or just resign and let someone else take the job. There are a lot of people living paycheck to paycheck in Florida as well; they’re looking for a senator that will fight for them each and every day.”

Rubio had seen that one coming and was ready with a devastating — and patronizing — counterattack.

He noted that Bush, in his attempts to regain his standing as the establishment favorite, had compared his efforts to those of Sen. John McCain (R-Ariz.), who resurrected a campaign that had been left for dead and went on to win the party’s nomination in 2008.

“I don’t remember you ever complaining about John McCain’s vote record,” Rubio said. “The only reason why you’re doing it now is because we’re running for the same position, and someone has convinced you that attacking me is going to help you.”

As Rubio took a victory lap of six network and cable news shows the morning after the debate, he sidestepped opportunities to keep bashing Bush. He told Savannah Guthrie, host of NBC’s “Today” show: “I still have tremendous admiration for him both as a person and what he did as governor of Florida. I’m not going to talk bad about Governor Jeb Bush. My campaign is not about him.”

This isn’t the first time that someone has asked whether we are about to see a breakout by Florida’s Junior Senator, who was largely languishing in the polls for most of the summer after entering the race in April. Earlier this month, in the wake of the second debate, Nate Cohn noted that Rubio seemed to be slowly rising the polls after that debate in which he also seemed to separate himself from the rest of the crowd.  Since then, Rubio has indeed slowly inched up in the polling to the point where he is in third place in the polling averages nationally, in Iowa, New Hampshire, South Carolina, and Florida. Granted, in all of these cases he’s trailing both Donald Trump and Ben Carson by substantial margins, and in some cases he’s not even, or just barely, in double digits. However, Rubio seems to be slowly moving up in the polls just as the campaign is entering what will essentially be the final phase before voting actually starts, and there’s at least some belief that his performance at Wednesday’s otherwise forgettable debate and the positive press he’s gotten from it in the past two days will translate into increased support, or at least mean that the uptick that he’s seen since September will continue as we go further into this process.

At the same time, it’s worth noting that there remain many signs of concern for Rubio going forward. The biggest one, of course, is fundraising. To say the least, Rubio’s fundraising numbers for the quarter that ended September 30th were quite disappointing, especially given the fact that he was outraised by candidates such as Ben Carson, Jeb Bush, and Ted Cruz, and that Carly Fiorina raised nearly as much money as he did. Part of this, no doubt, is the fact that many of the fundraising sources that Rubio would be expected to rely on remain committed to Jeb Bush’s campaign for the moment. However, with Bush’s campaign continuing to show signs of weakness after what has been universally seen as another weak debate performance, it’s possible that we’ll start seeing some of those people jumping ship, or at least hedge their bets by putting some money behind Rubio. Toward that end, it will be worthwhile to pay attention to Rubio’s fundraising going forward, as well as those of his SuperPAC. While the narrative coming away from the debate has been that Rubio bested Bush in their confrontation over Rubio’s Senate voting record, it’s Bush and his SuperPAC that have far more resources than Rubio has access to right now and they haven’t even begun to run their media campaigns. Two months from now, after commercials have been airing in New Hampshire and elsewhere, we could be looking at a very different race for the Republican nomination and Marco Rubio may not seem to be as much of a rising star as he appears to be at the moment

Notwithstanding those caveats, Rubio remains the same promising candidate he always has been. Despite the negative backlash he received after stepping up to support immigration reform in the Senate in 2013, he remains a popular candidate among the Tea Party and activist wings of the Republican Party and also tends to have a good relationship with the more establishment wing of the party thanks in no small part to his long political association with Jeb Bush. He has also staked out ground for himself as one of the few candidates on the stage who hits on foreign policy themes that resonate with Republicans. Lindsey Graham is also sort of in this camp, but he has so many other negatives among the activist wing of the party that there’s never been any chance of him becoming a credible candidate. Additionally, if it does turn out that the Bush campaign peters out as many seem to be predicting now, something that I don’t think is likely any time soon, he stands to be the candidate that will most directly benefit not only from grabbing the people supporting Bush in the polls but, more importantly, the donor and campaign network that Bush has already built across the country. In that event, Rubio would arguably be well equipped to take on Trump and Carson, neither of whom seem to be going anywhere anytime soon, and to hold off a potential rise by Texas Senator Ted Cruz, who at this point seems to be the only other candidate in the race with a potential upward trajectory.

How all of this plays over the coming months depends very much on things we can’t really foresee right now, the most immediate being whether Rubio does indeed see his poll numbers rise in the wake of the most recent debate. On paper at least, though, it would seem that things are well set for the junior Senator from Florida, the only question is whether he’ll be able to take advantage of it all.