Hillary Clinton’s Move to the Center

There has been a lot of discussion of late about Sen. Hillary Rodham Clinton’s apparent positioning to the right in recent months, notably bucking the Democratic presidential field on Iraq, a sudden emphasis on curtailing illegal immigration, and recent comments moderating her previous position on abortion.

Today’s NYT has this: As Clinton Shifts Themes, Debate Arises on Her Motives [RSS]

Conservatives have long caricatured Hillary Rodham Clinton, New York’s junior senator, as the sort of Democrat whose positions on social issues are out of step with Americans deeply concerned about religious and moral values. But while Mrs. Clinton has been strongly identified with polarizing issues like abortion rights, the picture that conservative Republicans paint of her is at odds with a side of herself she has lately displayed as she enters a new phase of her public life. In a recent series of public appearances, Mrs. Clinton has generated considerable attention – and, in some cases, scorn – by imbuing her remarks with mentions of God, faith, prayer and the need to be more tolerant of people who are opposed to abortion and gay marriage because of their beliefs.

By design or not, Mrs. Clinton has displayed remarkable timing. Her comments come against the backdrop of the Democratic Party’s efforts to shed its secular image after suffering major electoral defeats in November at the hands of Republicans, who emphasized Christian values in their campaigns. The recent pronouncements of Mrs. Clinton, who is widely considered a possible candidate for the 2008 Democratic presidential nomination, are a matter of considerable debate. Are they a calculated effort to court religious traditionalists as she positions herself to run for the presidency, as her critics maintain? Or do they reflect the true convictions of a woman who has sought to give a fuller picture of herself since leaving the White House and who, associates say, has been deeply and openly religious her entire life?

Rather clearly, the perception of her as well left of center is more than a Republican caraciture. From her student days at Welsley through her tenure as first lady in Arkansas and the United States, her statements and policy views were a lightning rod. I have no reason to suspect the sincerity of her religious faith but there is no doubt that her policy positions have been well outside the norm of evangelical Protestantism.

Mrs. Clinton weighed in on the debate over abortion recently, telling a prominent abortion-rights group in New York that adversaries on the issue should come together on “common ground” to reduce the number of unwanted pregnancies. The senator also praised religious organizations for promoting abstinence. Her aides say there was nothing new about her position, arguing that it was consistent with comments she had made in the past as well as her husband’s call for making abortion “safe, legal and rare.” But others, including Democratic allies, said her decision to speak out on the issue now was politically noteworthy, particularly since some Democrats believe the party needs to soften its stance on abortion in order to appeal to religious conservatives who often agree with Democrats on issues like social welfare and jobs. “It seemed like a sign that she is taking steps to position herself for a presidential run in 2008,” said one Democratic strategist. “Otherwise, there was no reason for her to talk about this, especially in a heavily pro-choice state like New York.”

Absent evidence to the contrary, I’m happy to take her at her word that she is both morally opposed to abortion and yet zealously in favor of the right for women to choose abortion–a position I find bizarre but not inconceivable. It’s hard to fathom why her public pronouncements would have shifted from a stance that would be at home at a NARAL meeting to one that would draw Amen’s in an Arkansas Baptist church if not for political positioning.

How odd it is to see Hillary trying to convince us that she’s a red state kind of girl (offering moderate views on abortion, condemning illegal immigration, emphasizing the importance of prayer in her life and backing the war) even as her party lurches to the left.

As the Clintons did after they lost Congress in 1994, they are moving to the center. And, as the Republicans did after taking control of Congress that same year, the Democrats are rushing to extremes. Eventually, Hillary and Dean will clash for control of the party. Hillary will win the nomination in 2008, but she will face a party fractured by its ideological divisions and will find it harder and harder to please the left in her own ranks and the centrists in the swing states.

I’m not much of a fortune teller and sure wouldn’t go out on a limb to predict the 2008 outcome at this stage. Underestimating the Clintons is a mistake Republicans should have learned by now to avoid. While Hillary lacks Bill’s incredible charm and empathy, she’s probably even smarter and certainly more disciplined. She may well be able to pull off the moderation move. She’s done it quite successfully on the national security front already.

Further, the Christian conservative wing of the GOP has a tendency to overplay its hand and get the false impression that most Americans are as rabid as they are, when in truth the key to winning national elections is coalition building. While I continue to believe that Hillary’s personality is too polarizing for her to win nationally, it’s not totally inconceivable if the Republicans overreach and nominate the likes of Rick Santorum. If, on the other hand, the GOP picks another candidate who can appear to the broad center while still exciting the base, they have an excellent chance of remaining the majority party through 2008 and beyond.

Update (1152): Mort Kondracke has an interesting column at RCP that’s a bit more gushing. Contrasting HRC with other 2008 likelies such as Evan Bayh, who appears to be tacking left in order to woo his party’s loyalists,

So, was his “no” vote on Rice a bid to win favor with the anti-war mainstream of the Democratic Party? Significantly, the arguable Democratic frontrunner, Sen. Hillary Rodham Clinton (N.Y.), voted for Rice – and also, taking a page directly from the centrists’ post-2004 playbook, went out of her way to show respect for foes of abortion and other “values” voters. […] Still, politicians’ actions have political consequences, and I think Clinton’s were more appropriate to her party’s current predicament than Bayh’s. A Northeast liberal, she’s tilting toward the center to make her profile more resemble that of her politically successful husband than, say, Sen. John Kerry’s (D-Mass.).

Clinton’s speech in Albany to New York family-planning providers was a political masterstroke – simultaneously sticking to fundamental Democratic abortion-rights principles, expressing respect for the values of anti-abortion voters and whacking the Bush administration. The speech, along with Clinton’s support for the Iraq war and recent expressions of religious faith, constitutes a near-perfect playing out of the wisest set of recommendations yet issued for Democrats post-2004. Right after the election, the DLC published a “Blueprint” with articles by its top officials, Al From, Bruce Reed and Will Marshall, that urges the party to widen its appeal beyond “blue” and “battleground” states to the “heartland,” especially the nine that Bush won by margins of less than 10 percent: Florida, Ohio, West Virginia, Iowa, Missouri, Arkansas, Colorado, New Mexico and Nevada.

As From and Reed put it, reflecting on the 2004 defeat, “when Democrats do not compete in three-quarters of American soil, we have no margins for error in presidential elections – and we’re almost certain to be a permanent minority in Congress.” They added that, “competing nationally … would force Democrats to develop a national message that would have broader appeal to swing voters in both red and blue states.”

The DLC is almost certainly right. Their former leader, Bill Clinton, is the only Democrat to win a presidential election since 1976. (Although, granted, Al Gore–a DLCer who didn’t run as one in 2000–won the popular vote.) I don’t think HRC is the candidate to do it, but that strikes me as the only formula that can win the presidency absent a whole lot of help from the Republicans. 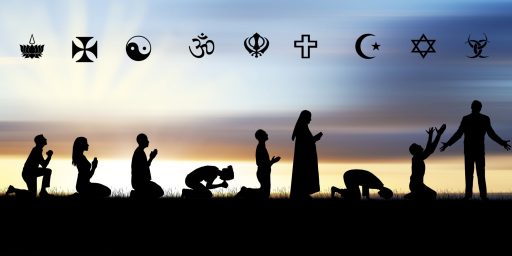