Ben Bernanke didn't offer many clues in his speech today, but one wonders if he really has any tricks left up his sleeve. 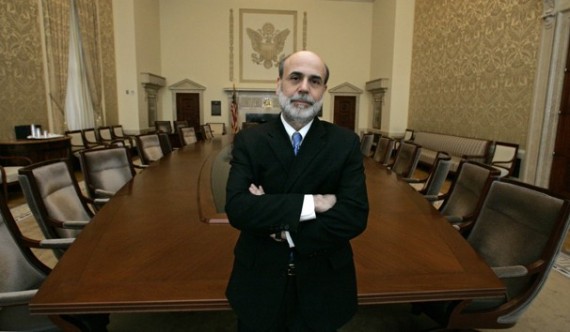 There was some anticipation that Federal Reserve Board Chairman Ben Bernanke would announce at least the outlines of another round of Quantitative Easing in his speech to an economic forum in Jackson Hole, Wyoming. Instead, he used the speech to send a message to Congress that they need to get the nation’s fiscal house in order:4

JACKSON, Wyo. — Ben Bernanke to Congress: Get your act together.

That was a major message in the Federal Reserve chairman’s closely watched speech Friday morning, as he suggested that one of the greatest risks to the U.S. economy is the confidence-shattering brinksmanship of the nation’s political leaders when it comes to sculpting good policy on taxes and spending.

“The country would be well served by a better process for making fiscal decisions,” Bernanke said at the Federal Reserve Bank of Kansas City’s annual economic symposium in Jackson Hole, Wyo. “The negotiations that took place over the summer disrupted financial markets and probably the economy, as well, and similar events in the future could, over time, seriously jeopardize the willingness of investors around the world to hold U.S. financial assets or to make direct investments in job-creating U.S. businesses.”

Indeed, the Fed chief implied that nothing less than a return to economic prosperity is at stake. “I do not expect the long-run growth potential of the U.S. economy to be materially affected by the crisis and the recession if—and I stress if—our country takes the necessary steps to secure that outcome,” he said, before enumerating a range of policies that could brighten the economic outlook.

The budget process, the Fed chief suggested, would be more effective if negotiators set “clear and transparent budget goals” and established “the credibility of those goals.”

He also gave Congress and the Obama administration some specific advice on reining in debt: Cutting the deficit over the long run and continuing tax and spending policies that help the economy in the short run are not inconsistent.

“Although the issue of fiscal sustainability must urgently be addressed, fiscal policymakers should not, as a consequence, disregard the fragility of the current economic recovery,” Bernanke said.

Here’s further detail of Bernanke’s message to Congress from his speech:

To achieve economic and financial stability, U.S. fiscal policy must be placed on a sustainable path that ensures that debt relative to national income is at least stable or, preferably, declining over time. As I have emphasized on previous occasions, without significant policy changes, the finances of the federal government will inevitably spiral out of control, risking severe economic and financial damage.1 The increasing fiscal burden that will be associated with the aging of the population and the ongoing rise in the costs of health care make prompt and decisive action in this area all the more critical.

Although the issue of fiscal sustainability must urgently be addressed, fiscal policymakers should not, as a consequence, disregard the fragility of the current economic recovery. Fortunately, the two goals of achieving fiscal sustainability–which is the result of responsible policies set in place for the longer term–and avoiding the creation of fiscal headwinds for the current recovery are not incompatible. Acting now to put in place a credible plan for reducing future deficits over the longer term, while being attentive to the implications of fiscal choices for the recovery in the near term, can help serve both objectives.

Fiscal policymakers can also promote stronger economic performance through the design of tax policies and spending programs. To the fullest extent possible, our nation’s tax and spending policies should increase incentives to work and to save, encourage investments in the skills of our workforce, stimulate private capital formation, promote research and development, and provide necessary public infrastructure. We cannot expect our economy to grow its way out of our fiscal imbalances, but a more productive economy will ease the tradeoffs that we face.

Finally, and perhaps most challenging, the country would be well served by a better process for making fiscal decisions. The negotiations that took place over the summer disrupted financial markets and probably the economy as well, and similar events in the future could, over time, seriously jeopardize the willingness of investors around the world to hold U.S. financial assets or to make direct investments in job-creating U.S. businesses. Although details would have to be negotiated, fiscal policymakers could consider developing a more effective process that sets clear and transparent budget goals, together with budget mechanisms to establish the credibility of those goals. Of course, formal budget goals and mechanisms do not replace the need for fiscal policymakers to make the difficult choices that are needed to put the country’s fiscal house in order, which means that public understanding of and support for the goals of fiscal policy are crucial.

Matthew Yglesias looks at Bernanke’s speech and expresses frustration that he seems more focused on inflation than economic growth. Given that the speech came on the same day that the Commerce Department came out with a revised 2nd Quarter GDP report that reduced the rate of growth during that period from 1.3% to 1.0%,  this isn’t an invalid concern. Focusing monetary policy solely and exclusively on inflation when there’s little sign that its around the corner, while economic growth languishes doesn’t necessarily make sense. Justin Wolfers listened to the same speech Yglesias did, though, and walked away with a different impression:

The most [Bernanke] could do is give an indication of where he thinks things will go.

Here’s the case he made:

1. Unemployment is too high. This is the usual argument for easing monetary policy.

2. Inflation is below target. The usual constraint preventing this doesn’t bind.

3. The possibility that high long-term unemployment may persist “adds urgency to the need to achieve a cyclical recovery in employment.” There’s a special reason to be more aggressive.

4. “The growth fundamentals of the United States do not appear to have been permanently altered.” Dismissing the counter-argument that this is structural.

5. “[T]he Federal Reserve has a range of tools that could be used to provide additional monetary stimulus.” He’s not out of ammo.

6. The FOMC is now going to meet for two days instead of one to discuss how best to use them. They’ve got to figure out how to load the guns.

So I read this as Ben saying: “Here’s the case I’m taking back to the Federal Open Market Committee. When we meet, you’ll hear what they decide.”

Wolfers expects some from of Quantitative Easing 3 in September, and he may be right. I’ve got to wonder if it will do any good, though. For the last three years the Federal Reserve Board has engaged in historically loose monetary policies. Interest rates are near zero in nominal terms and in real inflation-adjusted terms likely below zero at this point. There have been two rounds of Quantitative Easing. Still, the economy languishes along at near recession levels of growth, unemployment remains stubbornly high, and the heady days of 2001-2007 are fading away faster and faster in the rear view mirror. What, exactly, is pumping more money into the economy at this point going to accomplish that the previous rounds failed to accomplish?

Bernanke has an excellent point in his admonishments to Congress, and a more rational fiscal policy would certainly go a long way toward restoring economic confidence. At the same time, though, the fact that so many fiscal and monetary measures have already been tried, and failed, makes one wonder if anything is going to restart the economic engine of the country.