Progressives are increasingly frustrated that, despite having won the presidency by a comfortable margin and having solid majorities in the House and Senate — where they have a “filibuster-proof” 60 votes — they still can’t enact the policies they want.   Matt Yglesias says “smarter elements in Washington DC are starting to pick up on the fact that it’s not tactical errors on the part of the president that make it hard to get things done, it’s the fact that the country has become ungovernable.”

How so?  Well, it seems that Mitch McConnell, the Senate Majority Leader, has, in the words of Steve Pearlstein, “decided that the only way for Republicans to win is for President Obama to lose, and he will use lies, threats and all manner of parliamentary subterfuge to obstruct the president’s programs.”  If only the “Good Mitch,” Indiana Governor Mitch Daniels, were in his place!  Why, he’s “a principled but practical conservative who respects the intelligence of voters and would rather get something done than score political points.”

Matt doesn’t share Pearlstein’s sunny optimism.  Instead, he agrees (as do I) with Ezra Klein that being chief executive of a state rather than the opposition leader in the upper chamber of the national legislature  creates starkly different institutional incentives.   Matt concludes,

There’s a general consensus, which I’m part of, that our national politics have gotten more polarized and ugly in recent years.  We’re not where we were in the early 1800s, much less the mid-to-late 1800s, but it’s bad.   The filibuster, once a rare tool used to fight truly major changes, is now a routine legislative tactic.  And that’s frustrating and perhaps should be changed at the margins.  (For example, presidential appointees should get an up-or-down majority rule vote.)

That said, the institutions have not changed substantially in recent memory.  Some readers may recall the days of the George W. Bush administration, when a president with narrower margins in both Houses of Congress managed to get all manner of legislation passed, including a massive expansion of the Medicare entitlement and the authorization to fight two wars.  Off the books, no less!  During those days, Tom Daschle and then Harry Reid used every tool at their disposal to block legislation.  Sometimes, they were successful, as with Social Security privatization, perhaps the signature domestic plank of Bush’s re-election campaign; sometimes, less so.

Recall, too, that Obama has managed to get trillions of dollars in unpopular spending through Congress and seems to be on the verge of a massive realignment of the nation’s health care system.

But, you say, the health care mess proves Matt’s point:  The final bill won’t look anything like progressives want.   Yes, I’d retort, but progressives are something like 6 percent of the country.   Indeed, poll after poll shows that twice as many Americans are conservative as liberal.  It’s been that way for the entirety of Matt’s political lifetime.

Ah, you’d counter, but Democrats won the most recent elections, which means that Americans gave the green light to Nancy Pelosi to enact her wildest fantasies into law.   No, I’d say, they were tired of George W. Bush and liked this Obama guy, who seemed smart and reasonable.

While the minority has frequently abused their ability to act as obstructionists in recent years, the system mostly works as it is supposed to.  The country is polarized on a lot of key issues, which means there isn’t consensus for radical change.   In the case of health care, that’s perhaps too bad as we need some pretty radical changes to keep the system from crashing.  The problem is, there’s little agreement on what those changes should be.

But the president announced the other night that he was going to dramatically expand an increasingly unpopular war in Afghanistan and he’ll get what he wants; the people elected him as commander-in-chief and the opposition is itself polarized.  He managed to essentially take over two of the Big 3 auto companies with nary a whimper from Congress.   He got Cash for Clunkers through, twice.  Indeed, all manner of legislation has been signed into law since he took office a little over ten months ago, despite an “ungovernable” system.

That little of it matches either Matt’s preferences or mine is an indication of how idiosyncratic our preferences are, not of a failure of “the system.” 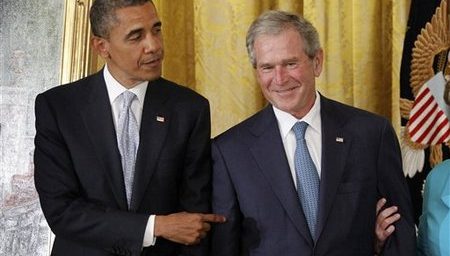