It appears that American officials are starting to refer to ISIS, which the President had previously principally referred to as ISIL, by an entirely new name:

On Wednesday, John Kerry was speaking at NATO headquarters in Belgium during a meeting of the United States-led coalition against the Islamic State extremist group. During his remarks, the secretary of state made a subtle, yet noteworthy, change to the language he was using: He began referring to the Islamic State by a name they hate.

Kerry has rarely used the term Daesh to refer to the Islamic State. In October, he sporadically used the phrase while talking with Egyptian Foreign Minister Sameh Shoukry in Cairo, though he still used ISIL in most references. On Wednesday, however, Kerry referred to the group as Daesh almost exclusively - he used the term 16 times and only used ISIL twice.

Naming the Islamic State has proved a problem for many organizations since the Sunni Islamist extremist group gained traction in Iraq this year. At first, many referred to it as the Islamic State of Iraq and Syria or the acronym ISIS. However, due to differences over how the name should be translated from its Arabic original, the U.S. government and some others referred to them as ISIL.

The group later announced that it should simply be called the “Islamic State” – a reference to the idea that the group was breaking down state borders to form a new caliphate - and many media organizations (including The Washington Post) began to refer to them this way. That in turn led to some complications: Islamic clerics around the world expressed anger at the extremist group being used to portray all of Islam, and requested that it be called by another name (a group of British imams suggested calling it the “Un-Islamic State,” arguing that it was “neither Islamic, nor is it a state”).

In most Arabic nations, however, the group is generally referred to as Daesh. Historian and blogger Pieter van Ostaeyen wrote this year that that word was a transliteration of an Arabic word (داعش), an acronym for al-Dawla al-Islamiya fi al-Iraq wa al-Sham (which is itself a transliteration of the group’s Arabic name: الدولة الإسلامية في العراق والشام). The word can be transliterated a variety of different ways: The Washington Post uses DAIISH, but DAASH, DAIISH and DAISH are also used.

Some non-Arab countries, including France, have begun using the name, too. ”I do not recommend using the term Islamic State because it blurs the lines between Islam, Muslims and Islamists,” Foreign Minister Laurent Fabius told reporters in September. “The Arabs call it ‘Daesh’ and I will be calling them the ‘Daesh cutthroats.’ ”

Swapping one acronym for another may not seem like too big a deal. But there’s an interesting detail here: According to multiple reports, the Islamic State loathes the name. There have been reports of the Islamic State threatening to cut out the tongues of anyone who used the phrase publicly, perhaps due to the word’s similarity to another Arabic word, دعس, or Das, which means to trample down or crush. The word “Daeshi” is used as an insult by anti-Islamic State groups.

So, it would appear that the U.S. Government may be on the verge of adopting a way of referring to ISIS/ISIl/IS that is deliberately insulting. At the very least, it’s an interesting and subtle form of propaganda to say the least. I’m just not sure it accomplishes anything. In any case, I don’t think I’m alone in saying that I just wish we’d all agree on one clear way to refer to them and stick to it already. 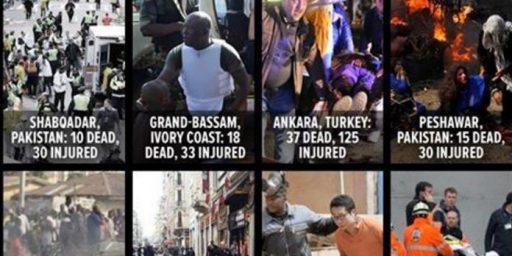 Should We Ignore the Terrorists?