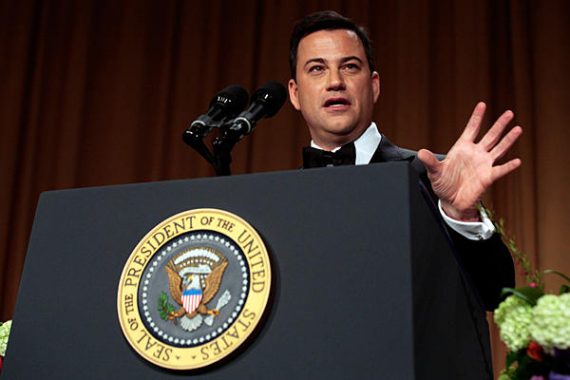 Before last month’s White House Correspondent’s Dinner Jimmy Kimmel apparently ran a few of his jokes by regular attendees, one of them smartly advised him to skip a joke that likely would have caused some serious embarrassment:

“I had some jokes about Rick Santorum,” Kimmel told Howard Stern in an interview on Sirius radio. “I said something like—well, I didn’t say it, but, ‘Newt Gingrich’s campaign is so dead Mitt Romney wants to baptize it and Rick Santorum wants to put it in a jar and show it to his kids.’ People went, ‘Uh-oh.’ I ran it by people who go to this thing.” (The joke made reference to the Santorums’ decision to bring their dead baby son home following a miscarriage.)

“Who do you run it by?” Stern asked, according to the transcript published on Romenesko.com.

“There’s a guy named Jake Tapper at ABC News,” Kimmel said. “I ran jokes by him. He’s been there a lot of times,” the comedian said, referring to the annual event.

“I tried to help Jimmy with the temperature of the room,” Tapper wrote in an email to Yahoo News. “And yes, I thought that joke would cause the room to turn against him, perhaps even causing a stampede, with the Hilton getting in on the tar and feather concession. Seeking to spare him a Rich Little-like reception, I offered my suggestions—such as they are—as to which jokes might bomb.”

Perhaps “saved Kimmel’s career” is a bit strong, but I don’t think it’s unfair to say that a joke like that would’ve caused a pretty loud uproar on the right, no to mention the fact that it’s was kind of tasteless.