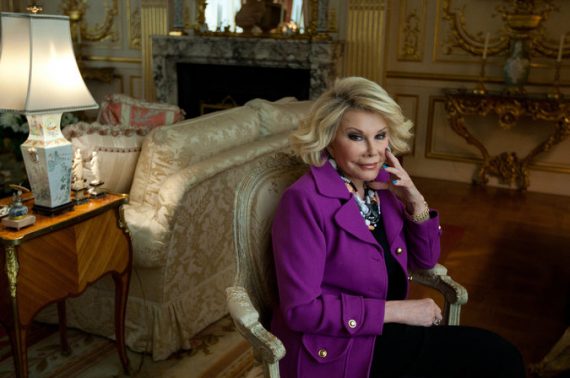 Joan Rivers, who became a pioneer for women in comedy and remained popular and active literally up until the end, has died at the age of 81, one week after being admitted to a New York hospital after going into cardiac arrest during an apparently routine outpatient medical procedure:

Joan Rivers, the raspy loudmouth who pounced on America’s obsessions with flab, face-lifts, body hair and other blemishes of neurotic life, including her own, in five decades of caustic comedy that propelled her from nightclubs to television to international stardom, died on Thursday in Manhattan. She was 81.

Ms. Rivers died at Mount Sinai Hospital, where she was taken last Thursday after reportedly losing consciousness while undergoing a procedure on her vocal cords at a doctor’s office on the Upper East Side. Doctors at the hospital placed her in a medically induced coma.

Vivacious even as a nipped-and-tucked octogenarian, flitting from coast to coast and stage to studio in a whirl of live and taped shows, publicity stunts and cosmetic surgery appointments, Ms. Rivers evolved from a sassy, self-deprecating performer early in her career into a coarser assassin, slashing at celebrities and others with a rapier wit that some critics called comic genius in the bloodletting vein of Lenny Bruce. Others called it downright vicious. But if she turned the scowlers off, she left millions in stitches.

“Can we talk?” she demanded in her signature call to gossip and skewer — the brassy Jewish-American princess from Flatbush, Brooklyn, and Larchmont, in Westchester County, leveling with the world.

She would take the stage in a demure black sheath and ladylike pearls, a tiny bouffant blonde with a genteel air of sorority decorum. Then she’d stick her finger down her throat and regurgitate the dirt on the rich and famous, the stream-of-conscious take on national heroes and sacrosanct cultural idols.On Nancy Reagan’s hairdo: “Bulletproof. If they ever combed it, they’d find Jimmy Hoffa.”

On Charlton Heston: “He told us, ‘I got Alzheimer’s.’ Surprise! He’s been wearing his wig sideways for 19 years.”

On Donatella Versace: “That skin! She looks like something you’d hang off your door in Africa.”

On Queen Elizabeth II: “Gowns by Helen Keller.” “Nice looking. Not at all like her stamp. Wears her watch over the glove, though — tacky.”

On herself, desperate for a man: “My parents had a sign, ‘Last girl before Thruway.’ I’d get an obscene phone call. I’d say, ‘Hold on a minute, let me get a cigarette.’ ”

On her husband’s suicide: “After Edgar killed himself, I went out to dinner with Melissa. I looked at the menu and said, ‘If Daddy were here to see these prices, he’d kill himself all over again.’ ”

Even the terrorist attacks on the World Trade Center were not off limits. “A few days after 9/11,” Jonathan Van Meter recalled in a 2010 New York magazine article, “she called and asked me if I wanted to meet her for lunch at Windows on the Ground.”

A contemporary of Woody Allen and Bill Cosby, she began doing stand-up routines in nightclubs in the late 1950s, and broke through as a guest on “The Tonight Show” with Johnny Carson in 1965. Over the next two decades she became a regular guest host on the Carson show, a Las Vegas headliner and a television star. In 1986, she hit the big time with a $10 million contract as host of the new Fox network’s weeknight entry, “The Late Show Starring Joan Rivers,” competing directly with her old benefactor.

Then came a series of devastating professional and personal setbacks. She was shunned by Carson, who said that she had never informed him of the Fox offer and that he apparently considered her disloyal for accepting it. She insisted that it had had nothing to do with loyalty, and that Fox had wanted her because her ratings were higher and her demographics younger than his.

After less than a year on the air, she was fired by Fox when her ratings slumped. Her husband and manager, Edgar Rosenberg, fell into depression after a heart attack and committed suicide in 1987. Ms. Rivers became estranged from her only child, Melissa. Bookings dried up, and her career seemed to be on the rocks.

But, struggling with grief, Ms. Rivers traveled for a time, then fell back on the resilience of laughter and revived her comedy career. As she told widows and other sorrowing women at a lecture billed as a “grief seminar” some years later: Think positive. Make a list. “One, I don’t live in Bosnia. Two, I never dated O. J.”

Joan Alexandra Molinsky was born in Brooklyn on June 8, 1933, to Meyer and Beatrice Grushman Molinsky, immigrants from Russia. Her father, a doctor, did comic impersonations of patients. Her mother insisted on piano lessons and private schools for Joan and her sister, Barbara, who grew up in Brooklyn and Larchmont. Joan attended Adelphi Academy in Brooklyn, Connecticut College for Women and Barnard College in Manhattan, graduating Phi Beta Kappa in 1954 with a degree in English.

Dreaming of an acting career, she worked in the publicity department at Lord & Taylor and was a fashion coordinator for the Bond clothing stores. Her marriage to James Sanger, the son of the Bond stores’ merchandiser, was annulled after six months in the 1950s. She married Mr. Rosenberg in 1965. Melissa was her only child.

Her parents refused to support her acting ambitions, and she struggled for years in office temp jobs while taking small parts off Off Broadway. She became a stand-up comic to support her acting, working in grimy cafes and small clubs, and was fired often. But she liked comedy and was good at it. She developed fresh routines based on her experiences and observations, changed her name to Rivers and got a few breaks.

She broke through on Carson’s show in 1965. They had an immediate rapport. She told gags about her mother’s struggle to marry her off, and about a motorist who ran over her wig and apologized for killing her dog. She soon had bookings at choice nightclubs in Chicago, New York and San Francisco.

As a frequent guest host on “The Tonight Show” in the ’70s, she toned down her acidity for the national audience and often exploited self-deprecation, a theme of her early nightclub work: “A peeping Tom looked in my window and pulled down the shade.” She was so fat as a child that “I was my own buddy at camp; I began to retreat into myselves.”

Her ratings as host sometimes surpassed Carson’s, and NBC signed her as the sole regular replacement during his eight or nine annual vacation weeks from 1983 to 1986. The national exposure made her a superstar. She was on magazine covers, commanded $200,000 for five nights in Las Vegas and was in demand for awards shows, conventions and TV specials.

Besides appearing in Hollywood films, she directed one: “Rabbit Test,” a 1978 comedy about the world’s first pregnant man, starring Billy Crystal, with Ms. Rivers in a cameo as a nurse. Critics hated it. But her volume of madcap fiction, “The Life and Hard Times of Heidi Abromowitz” (1984), was a best seller for months and sold a half-million hardcover copies.

After being dismissed by Fox, she reinvented herself as a writer, producer and entrepreneur. She and her daughter reconciled and made a film, “Tears and Laughter: The Joan and Melissa Rivers Story” (1994). From 2011 to they had their own reality show, “Joan & Melissa: Joan Knows Best?” on the WE cable channel.

My earliest memories of Joan Rivers came from her time as a guest and guest host of The Tonight Show, at least those times when my parents would let me stay up late enough to watch it. Then, I remember when she took the late night slot at the at the time still forming Fox Broadcasting Network, something which caused a permanent rift between her and Johnny Carson that was never healed. Indeed, from the time she took that job Rivers was not invited as a guest on The Tonight Show until earlier this year when she appeared with new host Jimmy Kimmel. In any case, she managed to bounce back from the disaster that the Fox show turned into and reinvent herself for a new generation. Indeed, she was still working right up until the end, with a show at a club in New York City the night before the doctor’s appointment that ended up sending her to the hospital last Thursday. Not bad for someone in their 80’s, not bad at all.