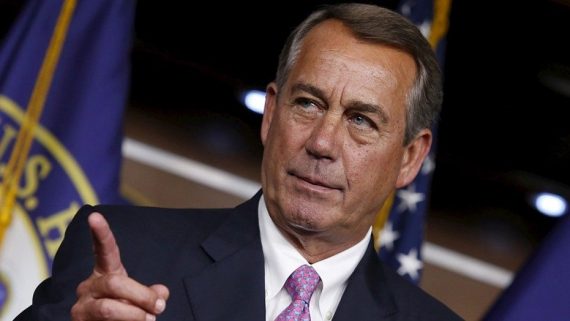 It’s probably just a coincidence that this news is breaking on the same day we learned that Paul Ryan will not be running for re-election, but former Speaker John Boehner made some news of his own:

Former GOP House speaker John A. Boehner, a longtime opponent of marijuana legalization, is joining a company that grows and sells cannabis, he announced Wednesday.

He has been appointed to the board of advisers of Acreage Holdings, which operates in 11 states, Boehner said in a statement.

“I have concluded descheduling the drug is needed so that we can do research and allow [the Department of Veterans Affairs] to offer it as a treatment option in the fight against the opioid epidemic that is ravaging our communities,” he said.

The move is a stark reversal for the former speaker, who in 2011 wrote a constituent that he was “unalterably opposed to the legalization of marijuana or any other FDA Schedule I drug,” adding that “I remain concerned that legalization will result in increased abuse of all varieties of drugs, including alcohol.”

Boehner reiterated his opposition to legalization as recently as September 2015.

Currently, nine states plus Washington, D.C. have legalized recreational use of the drug, while many others allow some sort of medical use. The Justice Department has been prohibited from using federal funds to target state-legal medical marijuana businesses since 2014.

Erik Altieri, executive director for the Washington-based marijuana advocacy group NORML, told The Washington Post that Boehner’s acceptance of marijuana tracks with rising American and even Republican lawmaker evolving beliefs about the drug and its uses.

Boehner is joined on the board of advisers by former Massachusetts governor Bill Weld, a Republican who left office in 1997 and was former New Mexico governor Gary Johnson’s running mate in 2016 on the libertarian party ticket. As governor, Weld advocated for medical marijuana legalization since 1992 but his time as a federal prosecutor limited his stance on how far to decriminalize marijuana, he said in 2016.

In a joint statement, Boehner and Weld focused on a long-standing concern among veterans and advocacy groups — federal law classifies marijuana as a Schedule I drug, the same as heroin and ecstasy.

“While the Tenth Amendment has allowed much to occur at the state level, there are still many negative implications of the Federal policy to schedule cannabis as a Class 1 drug: most notably the lack of research, the ambiguity around financial services and the refusal of the VA to offer it as an alternative to the harmful opioids that are ravishing our communities,” Boehner and Weld said.

I’m joining the board of #AcreageHoldings because my thinking on cannabis has evolved. I’m convinced de-scheduling the drug is needed so we can do research, help our veterans, and reverse the opioid epidemic ravaging our communities. @AcreageCannabis https://t.co/f5i9KcQD0W

While Boehner doesn’t come right out and use the word “legalization.” it’s rather clear that this is effectively what he’s talking about when it comes to de-scheduling cannabis, which is currently listed as a Schedule One drug, meaning that it is considered to be as illegal and as dangerous as other drugs such as heroin and cocaine and, ironically, more dangerous than the opioids that are currently the biggest addiction in the United States. While there has been much discussion about changing the scheduling of cannabis, no such action has been taken by the relevant Federal agencies and it seems unlikely that it will happen under the current Administration. This would seem to be especially true given the fact that the Justice Department announced last year that it was ending the policy of giving deference to states that had legalized marijuana. There has been a lawsuit filed in New York City challenging that scheduling, but it seems unlikely that this lawsuit will succeed and it any case it will remain stuck in the legal system for the next several years at least.

Notwithstanding those setbacks, January was the biggest month yet to advance the cause of legalization given the fact that California officially legalized marijuana based on the outcome of a 2016 referendum on the subject. Additionally, Vermont became the first state to legalize marijuana through the legislature instead of a voter referendum. New Jersey stands likely to be the second state where that happens thanks to the election of a Democratic Governor who supports legalization a Democratic state legislature that spent eight years trying to liberalize drug laws in the Garden State only to be thwarted by the veto of former Governor Chris Christie. Governor Murphy has already taken steps to use his regulatory powers to expand access to the state’s medical marijuana program. In 2017, we saw polling show that nearly two-thirds of Americans, including a majority of self-identified Republicans, support legalization, a new high for that question. With the move in Vermont, there are now 30 states where marijuana is either fully legalized, decriminalized, or at least legalized for medical use.

S0, welcome on board former Speaker Boehner. The more, the merrier.