A retiree with some rather strange views hosted a Tim Pawlenty event. 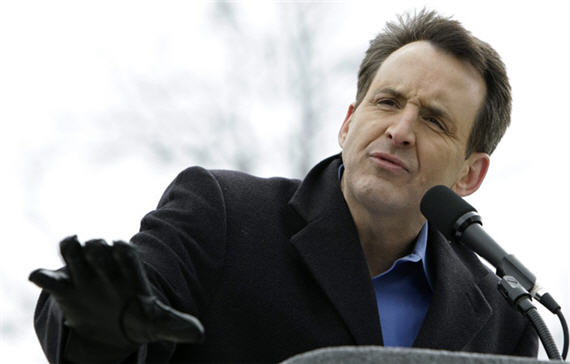 Mother Jones (“Tim Pawlenty’s New Hampshire Ally: Obama is a ‘Jungle Alien’“) engages in a bit of guilt by association:

During his recent swing through New Hampshire for CNN’s presidential debate, former Minnesota governor Tim Pawlenty courted more than a hundred Republicans at a house party in the town of North Conway. But the Pawlenty campaign’s choice of a host for the event, which was arranged by the candidate’s regional field manager in the Granite State, was nothing if not controversial. The party took place at the home of Ray Shakir, a local Republican activist and retired construction executive, who calls President Obama a “jungle alien,” Hillary Clinton “Osama’s dream girl,” and once labeled certain disabled children “uneducatable” and thus undeserving of taxpayer-funded schooling.

In an interview, Shakir says Pawlenty addressed tough issues at the house party, such as cutting subsidies for corn ethanol and implementing right-to-work legislation, which would allow employees to opt out of union membership but still receive union-won benefits. Shakir praises Pawlenty as “a real nice guy, very gregarious,” adding, “at this point in the game, Tim Pawlenty is my choice for president.”

But why did the Pawlenty campaign, running on a “Time for Truth” message, turn to Shakir, an activist whose eyebrow-raising comments on a range of topics fly in the face of that theme? Pawlenty, for instance, has repeatedlydismissed the unfounded rumors questioning President Obama’s US citizenship. Shakir, however, says Obama is “a jungle alien. Because that’s what he is—he’s not an American. You can call me a birther if you want.” Shakir claims the long-form birth certificate recently released by the Obama administration is merely a clever forgery. (The Pawlenty campaign did not respond to a request for comment.)

Shakir has a history of rhetorical flamethrowing. He’s referred to President Obama as “Borat Hussein O’Bummer” and suggested he is “a radical, subversive, con-artist fraud.” His repertoire also includes referring to Democrats as “Democ-Rats,” Bill Clinton as a “charlatan,” and former vice president Al Gore as “vice circus barker.” In 2007, he called then-presidential candidate Hillary Clinton “Osama’s dream girl.”And he once derided people who support a sales or income tax in New Hampshire as “pathetic individuals [who] are obviously deaf, dumb, and blind (oops…audibly, mentally, and visually challenged).”

I don’t have any strong feelings — or, hell, any weak feelings–about Pawlenty at this point. He’s touted as a frontrunner despite being a blip in the polls and was supposed to be on the short list for VP in 2008 but got passed over. Still, this seems a pretty tenuous case.

Shakir would appear to be what is known in the political science literature as a crazy sumbitch. He offered to host a campaign event for Pawlenty, his advance team accepted, and Pawlenty attended.

Should Pawlenty’s team have done a better job of vetting? Probably. A quick Google search reveals that Pawlenty hadpreviously encountered Shakir at an event in March, where he asked a series of tough questions whilst wearing a “Live Free or Die” ball cap and a wool sweater with “New Hampshire” on it.  My guess is that this was the campaign’s only exposure to the man.

In the age of Bill Ayers, loose association with kooks is enough to dog a candidate for some time. But, unless there’s other evidence that the candidate shares the kook’s beliefs–and the evidence points the other way for Pawlenty, just as it did for Obama–it’s not reasonable to infer much from it.