A weird new narrative has emerged.

Last night, CNN put out the most detailed version of an emerging narrative I’ve come across with “Exasperation and dysfunction: Inside Kamala Harris’ frustrating start as vice president.”

Worn out by what they see as entrenched dysfunction and lack of focus, key West Wing aides have largely thrown up their hands at Vice President Kamala Harris and her staff — deciding there simply isn’t time to deal with them right now, especially at a moment when President Joe Biden faces quickly multiplying legislative and political concerns.

The exasperation runs both ways. Interviews with nearly three dozen former and current Harris aides, administration officials, Democratic operatives, donors and outside advisers — who spoke extensively to CNN — reveal a complex reality inside the White House. Many in the vice president’s circle fume that she’s not being adequately prepared or positioned, and instead is being sidelined. The vice president herself has told several confidants she feels constrained in what she’s able to do politically. And those around her remain wary of even hinting at future political ambitions, with Biden’s team highly attuned to signs of disloyalty, particularly from the vice president.

I find this whole thing amusing, in that I’ve been perplexed going back to the transition just far Biden has gone to showcase Harris. He’s branded it the Biden-Harris administration since the beginning, which I’ve never seen before. Usually, the only time the VP gets mentioned in this way is when they’re a candidate for the Presidency themselves and are either trying to attach themselves to the glory of their former President (as Biden did during his 2020 run) or opponents are trying to blame them for decisions of an unpopular President (as Reagan did to Walter Mondale in 1984 and, to a lesser extent, George W. Bush did to Al Gore in 2000). Hell, even the White House flickr account is mostly photos of Harris.

At the same time, feeling marginalized and boxed in by the preferences of the President is simply the nature of the job. The VP is, at best, a second banana. While Harris was technically elected to her post, it comes with no real responsibilities and powers* and is an afterthought in the minds of most voters.

She’s a heartbeat away from the presidency now. She could be just a year away from launching a presidential campaign of her own, given doubts throughout the political world that Biden will actually go through with a reelection bid in 2024, something he’s pledged to do publicly and privately. Or she’ll be a critical validator in three years for a President trying to get the country to reelect him to serve until he’s 86.

Few of the insiders who spoke with CNN think she’s being well-prepared for whichever role it will be. Harris is struggling with a rocky relationship with some parts of the White House, while long-time supporters feel abandoned and see no coherent public sense of what she’s done or been trying to do as vice president. Being the first woman, and first woman of color, in national elected office is historic but has also come with outsized scrutiny and no forgiveness for even small errors, as she’ll often point out.

Honestly, that just comes across as whining. Yes, racism and sexism exist and, yes, she’s got slightly heightened responsibility in her capacity as a dual “first.” But, to the extent she faces more scrutiny than the average Vice President,** it’s because Biden is 137 years old and she’s next in line if something happens to him and the presumptive frontrunner for the Democratic nomination.

Defenders and people who care for Harris are getting frantic. When they’re annoyed, some pass around a recent Onion story mocking her lack of more substantive work, one with the headline, “White House Urges Kamala Harris To Sit At Computer All Day In Case Emails Come Through.” When they’re depressed, they bat down the Aaron Sorkin-style rumor that Biden might try to replace her by nominating her to a Supreme Court vacancy. That chatter has already reached top levels of the Biden orbit, according to one person who’s heard it.

There’s zero chance Biden replaces her on the ticket. This is a quadrennial fantasy of pundits trying to generate column ideas and hasn’t happened since Gerald Ford dropped Nelson Rockefeller from the 1976 ticket in favor of Bob Dole.

She’s perceived to be in such a weak position that top Democrats in and outside of Washington have begun to speculate privately, asking each other why the White House has allowed her to become so hobbled in the public consciousness, at least as they see it.”

She’s very honored and very proud to be vice president of the United States. Her job as the No. 2 is to be helpful and supportive to the President and to take on work that he asks her to take on,” said Eleni Kounalakis, the lieutenant governor of California and a longtime friend. Kounalakis spoke with the vice president last Monday morning before Harris departed for a diplomatic mission to France.

“It is natural that those of us who know her know how much more helpful she can be than she is currently being asked to be,” Kounalakis said. “That’s where the frustration is coming from.”

Again, Biden seems to have gone out of his way to give the appearance Harris is a partner and decision-influencer. Still, while Vice Presidents going back to Walter Mondale have taken on important roles, Harris is very much in the position Dan Quayle was in: very junior in Washington experience paired with a rare President who is a longtime Washington player.

An incumbent vice president should be a shoo-in the next time the party’s presidential nomination is open. But guessing who might launch a theoretical primary challenge to Harris has become an ongoing insider parlor game. Other politicians with their own presidential ambitions have started privately acknowledging that they are trying to figure out how to quietly lay the groundwork to run if and when Harris falters, as they think she might.

Certainly, the Vice Presidency has been the surest path to the party nomination, with Richard Nixon, Hubert Humphrey, Walter Mondale, George H.W. Bush, Al Gore, and Joe Biden all succeeding. But Spiro Agnew, Nelson Rockefeller, Dan Quayle, and Dick Cheney never got the nod and Mike Pence certainly looks unlikely to be the 2024 nominee. And, in almost every case, the VP faced a significant primary challenge. The chance to become President only comes around every four years, after all, and a same-party incumbent essentially makes it an eight-year wait.

Unless Biden dies in office and Harris becomes President by default—and I very much hope that doesn’t happen—there’s certainly no guarantee she’s the 2024 or 2028 nominee. Sure, her profile is increased and her resume is significantly enhanced. Still, despite being an early frontrunner after going after Biden in the debates, she ran a terrible campaign in 2020 and was forced to withdraw before the first primary. Tulsi Gabbard outperformed her. Of course she’ll face a serious primary challenge.

There’s a whole lot more to the report—it’s magazine feature in length—but you get the idea.

The administration is pushing back on the narrative. A Guardian report (“‘A bold leader’: White House defends Kamala Harris after reports say she’s struggling“):

The White House was moved to defend her on Sunday night, after leading US media outlets portrayed a VP struggling to make her mark.

“For anyone who needs to hear it,” said the White House press secretary, Jen Psaki, Harris “is not only a vital partner to [Joe Biden] but a bold leader who has taken on key, important challenges facing the country – from voting rights to addressing root causes of migration to expanding broadband.”

Whether this message will be helpful to her is anyone’s guess.

________________
*Yes, I’m aware that the VP is president of the Senate and that since the body is currently 50 Democrats and 50 Republicans, Harris casts a tie-breaking vote. But she has no real latitude in how she casts it.

**It’s a tangential point but really one hard to assess. Predecessors Richard Nixon, Dan Quayle, Dick Cheney, and Biden himself all got a whole lot of scrutiny for varying reasons. But the political climate and informational architecture have continued to evolve, making direct comparison challenging. 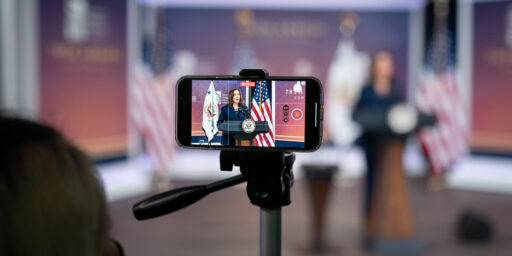