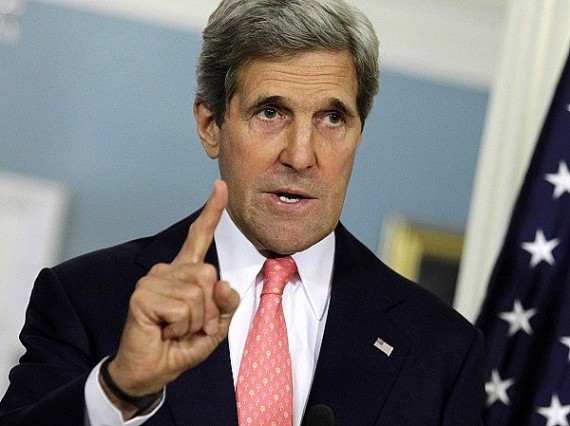 Secretary of State John Kerry found himself having to backpedal quite vigorously yesterday after remarks that he made about the Middle East peace process:

WASHINGTON — Secretary of State John Kerry issued an unusual statement Monday evening expressing his support for Israel after a controversy erupted over a politically charged phrase he used in a private appearance.

Speaking to a closed-door meeting of the Trilateral Commission last week, Mr. Kerry said that if a Middle East peace agreement was not achieved, Israel risked becoming an “apartheid state,” according to an article in The Daily Beast, an online publication. The comments were noted in the Israeli news media and were severely criticized by some American Jewish organizations.

”Any suggestion that Israel is, or is at risk of becoming, an apartheid state is offensive and inappropriate,” the American Israel Public Affairs Committee said. “Israel is the lone stable democracy in the Middle East, protects the rights of minorities regardless of ethnicity or religion.”

During his push for a comprehensive peace agreement, Mr. Kerry has repeatedly warned that Israel could face economic pressure from European nations as well as Palestinian violence and a demographic time bomb at home — meaning Jews could become a minority in Israel and the territories they control — if Israel did not negotiate an agreement that led to an independent Palestinian state.

His recent comments came at a particularly sensitive moment with the peace talks put off, after Israel’s decision to suspend negotiations because of the Palestine Liberation Organization’s announcement of its reconciliation with Hamas, the Islamic militant group that governs Gaza.

In the statement that Mr. Kerry issued Monday, which bore the title “On Support for Israel,” he said that he had been a staunch supporter of Israel during his years as a senator and had spent many hours since working with Prime Minister Benjamin Netanyahu and other Israeli officials.

Mr. Kerry added that he did not believe that Israel was an “apartheid state” or intended to become one. Mr. Kerry did not dispute he had used the phrase but said it had led to a “misimpression” about his views.

“If I could rewind the tape, I would have chosen a different word to describe my firm belief that the only way in the long term to have a Jewish state and two nations and two peoples living side by side in peace and security is through a two state solution,” he said.

“In the long term, a unitary, binational state cannot be the democratic Jewish state that Israel deserves or the prosperous state with full rights that the Palestinian people deserve,” he added.

The point that Kerry was actually trying to make here isn’t really all that controversial, actually. In the long run, a peace deal that results in two states, one Israeli and the other Palestinian, living together in peace is in the long term interests of not just the Palestinians, but also the Israelis. For one thing, a peace deal presumably mean the end of the threat of terrorism, thus significantly reducing the national security threat the nation faces. More importantly, though, maintaining the status quo poses dangerous for Israel internally to the extent that it threatens the nation’s ability to maintain both its democratic political system and its identity as a Jewish State due to simple matters of demography. Additionally, as we’ve seen here in the United States in our own ways, there are inherent contradictions between maintaining a national security state and respecting civil liberties. If Israel continues to consider itself under threat from the Palestinians then it will find it necessary to increase security at the expense of civil liberties.

All that being said, though, Kerry’s comments were quite obviously a mistake both for domestic political and diplomatic reasons. Primarily, of course, there’s just the idea of equating a close ally with one of the most evil regimes of the post World War II era. To be fair, of course, that’s not what Kerry was saying here, he was saying that there was a danger that this is what could happen to Israel if a peace deal wasn’t reached. He isn’t even the first person to issue such a warning. American pundits and Op-Ed writers have said much the same thing several times over in the past. However, it’s not always a good idea to use the language of punditry in the world of diplomacy, especially when dealing with one of the most sensitive conflicts in the world today. The fact that the remarks became public at the same time that Israel was marking   Yom HaShoah, the day set aside to remember the victims of the Holocaust, no doubt added to the sensitiv That goes double given that the Israeli-Palestinian conflict is also hot button political issue here in the United States. That’s why you saw Members of Congress from across the political spectrum, ranging from Ted Cruz to Barbara Boxer were quick to condemn Kerry’s remarks.

Cruz, along with some pundits on the right, has called for Kerry to resign over all this, and some commentators are already wondering what this might mean for future relations with Israel for the remainder of the Obama Administration. However, I doubt that this will have much of an impact either domestically or internationally. The idea that Kerry should resign over one remark made to a private audience is, quite honestly, absurd, and I think even Cruz knows that. While I will admit that his nearly 1 1/2 years in office have, in many cases, been less than stellar, it doesn’t seem to me as though Kerry has done anything to merit termination. As far as Israel goes, I have to believe that the conversations that occur between American and Israeli representatives in private are even more frank than what Kerry said in this private meeting. The fact that this became public will likely lead to some kind of response from Israel, but it’s unlikely to have any real impact on the behind-the-scenes relationship between the two nations. So, while this what a gaffe and Kerry’s statement last night was entirely necessary, this doesn’t strike me as something that’s going to have much of a long term impact.

The back story to all of this, though, is the fact that Kerry likely thought that his remarks would never become public given the fact that they were being given before a private meeting of the Trilateral Commission. As it turned out, though, a Washington reporter had apparently managed to get inside, or get someone inside, the meeting with a tape recorder:

Secretary of State John Kerry’s private remarks to a meeting of influential world leaders last week were allegedly taped by a reporter from The Daily Beast, a fact that led to a personal apology from Trilateral Commission chairman Joseph S. Nye on Monday.

In a letter to Sec. Kerry, obtained by POLITICO, Nye expressed “my deep apology and dismay that a reporter form The Daily Beast, Josh Rogin, somehow sneaked into the meeting room in which you were speaking to the Commission this past Friday.”

“He was not invited,” Nye wrote. “Althought how Mr. Rogin slipped past both Commission staff and Diplomatic Security is unclear to me, we have confirmed that he indeed was present and apparently recorded the session.”

Politicians, diplomats and prominent media figures who attended Friday’s meeting of the Trilateral Commission in Washington had agreed, as they do every year, not to record or report on speakers’ remarks without permission. Rogin, who was not invited to the event, was not bound by this agreement.

Within minutes of Kerry’s remarks on Friday, Rogin posted an exclusive to The Daily Beast in which he reported that Kerry had “warned that [a] new round of American financial assaults on Russia were on the way.”

On Sunday, Rogin posted another exclusive headlined, “Kerry Warns Israel Could Become ‘An Apartheid State’.” The report earned Sec. Kerry fierce criticism from Jewish organizations such as AIPAC, which called the remarks “offensive and inapropriate,” and the Anti-Defamation League, which called them “incendiary.”

In the first article, Rogin attributed his knowledge of Sec. Kerry’s remarks to “an attendee.” In the second article, he attributed them to “a recording… obtained by The Daily Beast.” Rogin did not mention his presence at the event in either article.

Reached by phone, Rogin told POLITICO, “I don’t comment on my sourcing. I didn’t break any rules or agreements in the reporting of this article.”

If nothing else, the Trilateral Commission’s role in this story will give the conspiracy theorists something to chew over for the next few days.