Libya After Gaddafi: Lessons From Iraq

The Atlantic has published an essay I wrote yesterday morning titled "Libya After Qaddafi: Lessons from Iraq 2003." 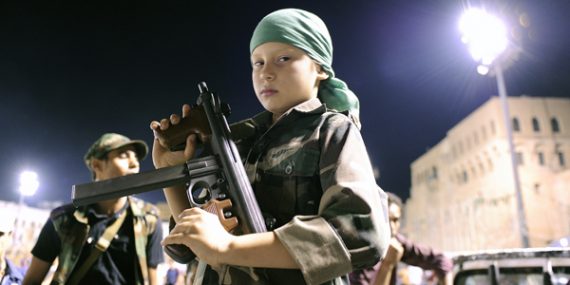 The Atlantic has published an essay I wrote yesterday morning titled “Libya After Qaddafi: Lessons from Iraq 2003.” An excerpt:

Who can forget the giddiness when Saddam’s statue fell? When sons Qusay and Uday were killed? When Saddam himself was dragged out of his spider hole? Or the smiling faces of the purple-fingered Iraqis voting in their country’s first meaningful elections?

Before President Obama slips into a flight suit, it’s worth remembering that things soon took a turn for the worse in Iraq and it would be years before that fight began to calm.

That’s not to predict, much less hope for, a repeat in Libya. Despite Americans’ love of historical analogies in framing foreign events, they seldom follow neat patterns.

While the revolutionaries were united against Qadaffi, it’s far from clear what, if anything, they’re united for. And with their unifying enemy on his way out, they’ll need something more to bring them together to rule.

How will reconciliation with former regime elements be handled? How quickly will law and order be established? Will international peacekeepers be necessary? If so, how will such a force be organized and manned? When will elections be held and who will be allowed to participate? What form of government will be established in the interim? These are just a handful of the questions most immediately facing Libya.

Daunting though these questions might be, there’s at least one good reason to be optimistic that Qaddafi’s fall will not be like Saddam’s: the latter debacle is fresh on everyone’s minds. While NATO appears to have done scant planning for post-Qaddafi Libya, the Transitional National Council and others, including the UK government, have shown encouraging signs that they aim to avoid the mistakes of 2003.