Love the Tracking? Hate the College

Yet another in a long line of critiques of the electoral college.

If, as I am sure is the case for many, one has found oneself excited about the recent narrowing of the gap in the daily tracking polls (or, for that matter, if one spends a lot of time looking at such numbers in an obsessive political junkie kind of way*) I would submit that now is a good time to re-evaluate one’s position on the electoral college (assuming that one even has a position on said institution).

This is not, by the way, a simple “you do know that the popular vote doesn’t elect the president, don’t you?” kind of post (although there is a little of that at the end).  No, this is a “consider how differently the campaign would run if we actually elected the president via the popular vote” post.

In the wake of the debate last, we have seen a substantial narrowing of the national head-to-head tracking polls (to the point, and to my amusement, that friends on Facebook who had been questioning the polls when Romney was down are now posting links to polls in their timelines).  The RCP average as of this morning is Obama +0.5 with Romney ahead +4 in the Pew poll (the same poll that had Obama up +8 a few weeks ago).

Consider if that gap, an average of half a percent, was the number that directly mattered to the electoral outcome.    The candidates would be in a position to have to get every vote necessary, including even paying attention to those enclaves of voters that they can currently take for granted (turnout and enthusiasm matters if every vote counts).   In a system in which the popular vote mattered, candidates would need to pay heed to voters in places like Los Angeles and Houston, not to mention even Birmingham and Lexington.  However, the doubling-down at the moment is going to be in swing states and swing states alone.  The only reason to pay attention to the settled states is to fund raise.

So, going forward, the campaigns will continue to do what they have been doing:  focusing on a handful of states.  The turnout in Florida, Ohio, and Virginia, to name three sates, is far more important than the turnout in California, New York, and Texas.  The former states are in play, the latter are not and, therefore, the candidates are targeting and campaigning to the citizens in the first set of states, and not the second.

Why we want a system that encourages, indeed requires in a practical sense, to ignore huge swath of the population is beyond me.

Now, as I recall from people who know more about polling than do I, state-level polls tend to lag changes at the national level.  As such, shifts in the tracking polls do not show up in the state level polling at the same time.  So, if there is a permanent shift in the national numbers, we should not expect to see these immediately reflected at the state level.

Having said all of the above, the basics of this contest appear to me to remain roughly the same place it has been for months:  with Governor Romney facing some very daunting electoral math.  The following is from Real Clear Politics: 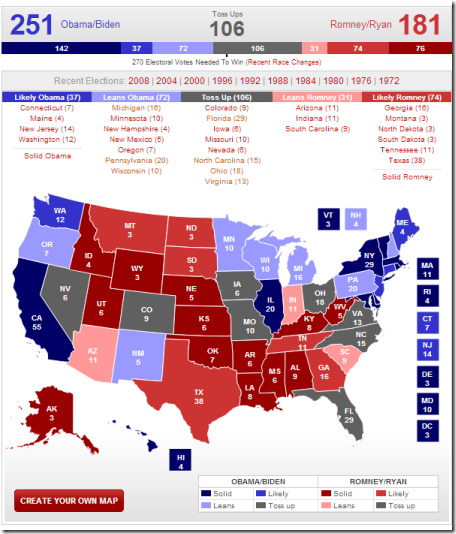 Consider that if this is accurate, Obama needs to find only 19 of the 106 toss-up electoral votes (i.e., 17.8% of the take) while Romney needs  89 (84.0%).   This means if, starting with the base of 251, Obama only needs one of the following combinations (and I am not giving all of them):  Florida alone, Ohio+any other state, Virginia+Iowa, Virginia+NV, VA+CO, or several others.  Romney, on the other hand, has to almost sweep the swing states.  Is this possible?  Sure, but the probabilities don’t look all that great at the moment.

According to the RCP averages, Obamas leads in almost all of the swing states (of the gray states on the map, Romney only leads in North Carolina (+ 0.8) and Missouri (+5.2) and Florida is currently a tie.

Wouldn’t it be better if the candidates had to fight for every vote (as is the case in every other country with elected presidents)?   As it stands, the election is currently outsourced to swing-state voters and hinges heavily on who turns out to vote in those states.

I will conclude by pointing out, as I often do in these discussions, that the electoral college does not function, at all, the way that the Framers thought that it would (so if one’s fidelity to the institution is based in one’s high esteem for the Framers, then one needs another reason for one’s position).  See my post:  Looking to the Design of the Electoral College.

*Not that I have any direct experience with such.