If it's September, it must be time for Mahmoud Ahmadinjad to stand up before the United Nations General Assembly and say something completely insane. 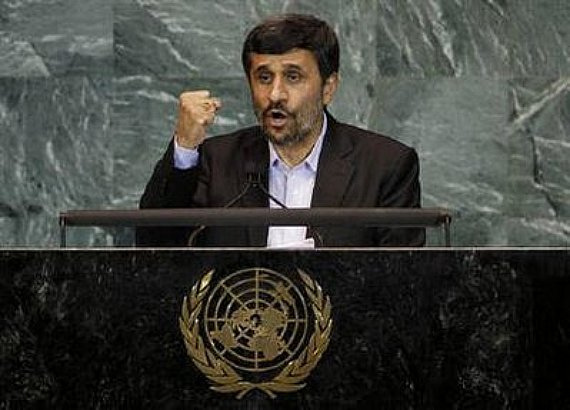 In what seems to be turning into an annual exercise, Iranian President Mahmoud Ahmadenijad used the occasion of his speech before the United Nations General Assembly to say something completely insane:

President Mahmoud Ahmadinejad of Iran made a series of incendiary remarks in his speech to the United Nations General Assembly on Thursday, notably the claim that the United States orchestrated the Sept. 11 attacks to rescue its declining economy, to reassert its weakening grip on the Middle East and to save Israel.

Those comments prompted at least 33 delegations to walk out, including the United States, Canada, Australia, New Zealand, Costa Rica, all 27 members of the European Union and the union’s representative, diplomats said.

The annual General Assembly started formally on Thursday, with scores of presidents, kings and ministers expected to address the gathering over the coming week. The speeches often fail to break new ground or lack electricity, so the occasional theatrics inevitably attract considerable attention.

Mr. Ahmadinejad rarely disappoints on that scale, although he seemed to go out of his way to sabotage any comments he made previously this week about Iran’s readiness for dialogue with the United States. The theme of his often flowery speech was that the capitalist world order was collapsing and he cited three examples: the attacks of Sept. 11, 2001, the Israeli occupation of Palestinian lands, and the pressure on Iran over its nuclear program.

He said there were three theories about the origins of the Sept. 11 attacks, including “that some segments within the U.S. government orchestrated the attack to reverse the declining American economy and its grips on the Middle East in order also to save the Zionist regime.”

The United States Mission to the United Nations swiftly issued a terse response. “Rather than representing the aspirations and goodwill of the Iranian people, Mr. Ahmadinejad has yet again chosen to spout vile conspiracy theories and anti-Semitic slurs that are as abhorrent and delusional as they are predictable,” it said in a statement.

This isn’t really anything new, of course. Last year, Ahmadinejad’s speech consisted of a diatribe against capitalism, Israel, and the United States. Not surprisingly, the United States walked out on that speech as well. What makes speeches like this odd, in the diplomatic sense, is that at the same time that the President of Iran is going off on his wild-eyed rants, we get reports like this:

UNITED NATIONS – Iran increasingly appears willing to enter into negotiations in the near future over its nuclear program, diplomats close to the talks said Wednesday, a move that would restart a process that ended abruptly last fall.

Iranian President Mahmoud Ahmadinejad this week expressed public interest in renewing talks with the United States and other major powers. Iranian officials have privately echoed that sentiment in conversations with diplomats on the sidelines of the U.N. General Assembly, leading officials to believe Tehran will soon formally agree to resume talks.

Secretary of State Hillary Rodham Clinton and her counterparts from Russia, China, Britain, France and Germany met Wednesday to discuss the prospects for negotiations and to review the implementation of sanctions imposed on Iran in June by the U.N. Security Council. In a statement afterward, the officials stressed their interest in a reaching a deal with Tehran.

“We reaffirmed our determination and commitment to seek an early negotiated solution to the Iranian nuclear issue and focused our discussion on further practical steps to achieve it at an early date,” the ministers said in a statement read to reporters by European Union foreign policy chief Catherine Ashton, who is the chief negotiator with Iran for the major powers.

The statement did not suggest any new sanctions or other punitive steps on Iran if it failed to negotiate seriously, and diplomats said any discussion of new sanctions would be far in the future.

In a tentative deal reached in Geneva in October, Iran agreed to begin discussing its nuclear program while the United States, Russia and France agreed to help refuel an Iranian research reactor used for medical purposes. But the negotiations never began and the deal to help with the research reactor quickly fell apart too.

In the past year, amid signs of a slowdown in nuclear work, Iran has significantly bolstered its stockpile of low-enriched uranium and begun to enrich an even higher-grade stockpile for the research reactor – even though it lacks the technical capability to turn the material into usable fuel rods.

Iran has tried to make the need to refuel the research reactor the center of the talks – notably in a deal with Brazil and Turkey that was ignored by major powers – but diplomats said Iran’s inability to fuel the Tehran Research Reactor provides an opening for confidence-building steps that would lead to a broader agreement on Iran’s larger nuclear program.

It’s hard to figure out what Iran has in mind here. I’d say it was a game of good-cop, bad-cop, but given who the President of Iran is, it could be a game of sane-diplomat, irrational-President.